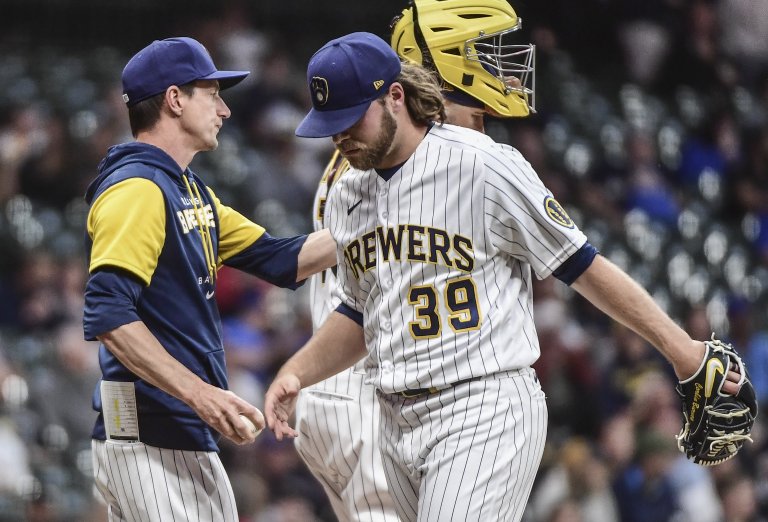 The Phillies and Brewers meet in the rubber match on Thursday
Milwaukee is a -170 favorite with Corbin Burnes on the mound
The Phillies vs Brewers odds, lines, preview, and picks can be found below

The red-hot Philadelphia Phillies face the Milwaukee Brewers in the series finale of a three-game set on Thursday afternoon. The first pitch is scheduled for 2:10 pm ET at Miller Park.

The Phils will go with right-hander Zach Eflin in the rubber match, while the Brew Crew sends their ace Corbin Burnes to the mound.

The runline is favoring the Brewers at -1.5 but Philly is 14-9 as an ATS underdog this season.

The Phillies’ pitching staff hasn’t been great in 2022, but Eflin is evidently one of their lone bright spots. The 28-year-old is 2-4 with a 3.88 ERA, which leads Philadelphia’s rotation. In 51 innings, Eflin has struck out 45 batters and walked just nine, showing excellent command.

The right-hander is also coming off a fine outing on June 3rd, tossing eight frames of scoreless baseball against the Angels, scattering only five hits. This is Eflin’s first start against the Brewers this year, but he’s gone 2-2 with a 4.58 ERA in four career appearances.

Burnes is putting up yet another breathtaking campaign and is once again the favorite in NL MVP odds. The 27-year-old is only 3-3 on the season but he’s compiled a stellar 2.50 ERA and a WHIP under one. Burnes has struck out an impressive 84 hitters in 68.1 innings as well while surrendering just 13 walks.

That being said, Burnes just endured his worst outing of 2022 so far, lasting only 3.2 innings against the Padres after they tagged him for five earned runs and eight hits. That was only the second time this season he’s given up more than two runs in a single start. Burnes has barely faced the Phillies in his career, tossing four scoreless innings in relief against them.

Ever since the Phillies fired Joe Girardi, they’ve looked like a completely different ballclub. Prior to Wednesday’s contest, Philadelphia won five in a row, sweeping the slumping Los Angeles Angels in the process.

The offense banged out 26 runs in that three-game series and also started their winning streak with a thrilling victory over the Giants at home. However, Philly’s lineup will have a very tall task on Thursday against one of the best pitchers in all of baseball.

Milwaukee is lucky the NL Central is one of the worst divisions in baseball because even though they’ve lost five straight, the Brewers still remain in first place just above the Cardinals. Craig Counsell’s group dropped three of four to the Padres and struggled immensely to score runs, getting shut out in two of those games.

The Brew Crew are literally being carried by their pitching staff, who boasts a 3.40 ERA as a team. That’s sixth in the Majors. The offense? 24th in average, 25th in hits, and 12th in runs scored per game with 4.4. Not exactly ideal. Now, Milwaukee will be looking to avoid the sweep on Thursday.

As well as Philadelphia is playing, Burnes is far too good to not bounce back with a brilliant start here. Although his ERA is only 3.86 at Miller Park, I believe he will dominate here and help the Brewers grab a much-needed win.