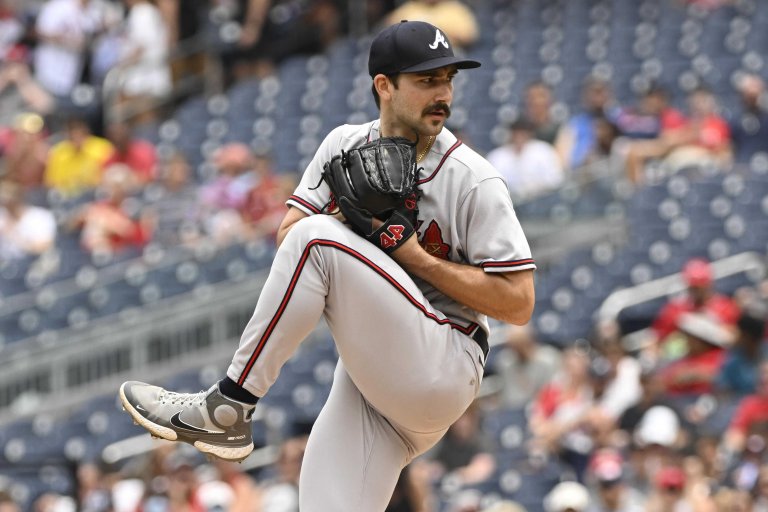 The Braves are -225 home favorites over the Phillies on Tuesday night
Nick Nelson (3-1, 3.94) will pitch for Philadelphia against rookie Spencer Strider (5-3, 2.91)
A look at the Phillies vs Braves odds and matchup can be found below with a prediction

Two National League East teams on winning streaks square off when the Philadelphia Phillies visit the Atlanta Braves at 7:20 p.m. ET Tuesday in the opener of a two-game series at Truist Park.

The Phillies and Braves were both off Monday.

Odds as of August 1st at DraftKings Sportsbook.

The weather forecast calls for a 30% chance of showers and thunderstorms around the scheduled first pitch with a temperature of 85 degrees – and a low of 73 – partly cloudy skies and west wind at 5 mph.

Nelson will be making his second start of the season and 28th appearance. This would normally be Kyle Gibson’s turn in the Phillies’ rotation, but he is on the bereavement list following the death of his grandmother.

Nelson’s other start came July 10 when he faced the Cardinals in St. Louis and gave up one run in two innings. He did not factor in the decision in a game the Phillies lost.

Against the Braves, Nelson is 0-1 in his career with a 5.40 ERA over three relief appearance. The only time Nelson has pitched at Truist Park was May 24 and he was charged with two runs (one earned) in one inning out of the bullpen.

Strider has made 11 starts after 11 relief appearances to begin the season. Over his last nine starts, Strider has gone 4-1 with a 3.02 ERA.

Strider beat the Phillies last Tuesday in Philadelphia, allowing one run and three hits in six innings with six strikeouts and one walk. He is 2-0 against them lifetime with a 1.04 ERA in two games (one start).

Spencer Strider could become the first rookie in MLB history with 100+ innings pitched to have a 25.0+ K-BB%, in a single season.

Strider currently has a 27.6 K-BB% through 80.1 innings.pic.twitter.com/tDAU8GkECj

Third baseman Alec Bohm is 2 for 3 against Strider but the rest of the Phillies are only 1 for 26. Braves hitters are a combined 4 for 12 off Nelson.

Bohm had four hits, including a double and home run, to lead the Phillies over the Pirates on Sunday. His four hits came in the span of the first five pitches he saw.

The last Philadelphia Phillie with more hits in July than Alec Bohm was Jimmy Rollins:

A walk-off double by Austin Riley in the bottom of the ninth accounted for the game’s lone run as the Braves beat the Diamondbacks on Sunday. Riley then got a $10-million, $212-million contract extension Monday.

The Phillies and Braves have split 10 games this season, including four in Atlanta.

AUSTIN RILEY IS THE BEST PLAYER IN THE NATIONAL LEAGUE pic.twitter.com/7uAQH8H7GB

The Phillies are rolling and should have a better idea of how to attack Strider after facing his last week. Even though it is a bullpen day, Philadelphia makes for an intriguing underdog pick at a tasty price.