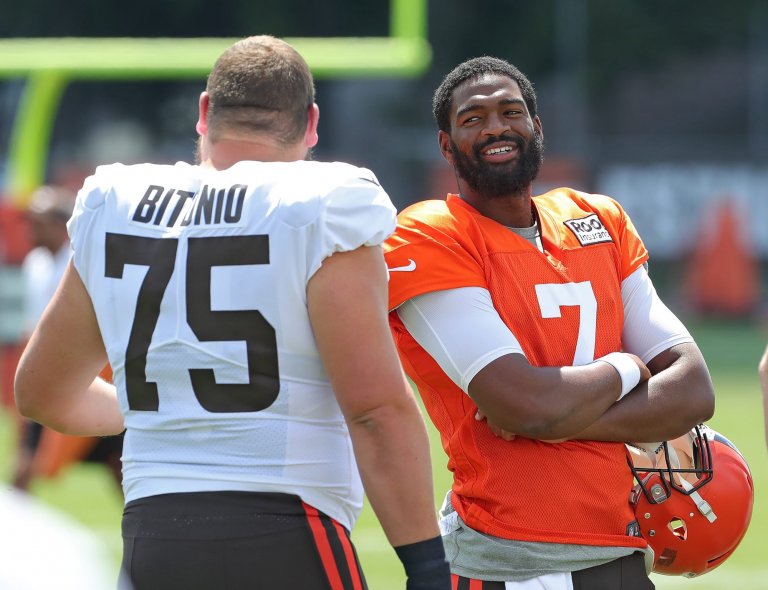 The Cleveland Browns host the Philadelphia Eagles in Week 2 preseason action
Deshaun Watson won’t play in Week 2 or 3 of the preseason
See the Eagles vs Browns odds, who’s in and out, and our betting prediction

On Thursday, the NFL sidelined Deshaun Watson from any meaningful NFL play until December.

The Cleveland Browns announced they are also doing the same for at least the next two preseason games.

That means Jacoby Brissett should get major reps when the Browns host the Philadelphia Eagles Sunday.

It all gets underway at 1pm ET from FirstEnergy Stadium, in a game that can be seen live on NFL Network.

Temperatures are expected to be in the mid-70’s, with a chance of thunderstorms.

Odds as of August 20th at Barstool Sportsbook

The visiting Eagles are 2.5-point road favorites in this one, with a total that check in at 35.5.

Philly is coming off a 24-21 loss to the Jets to open their preseason, while the Browns reeled off their fifth straight preseason win, knocking off the Jaguars 24-13.

We knew Brissett was going to be the Day 1 starter for the Browns, but now we know he’ll need to be halfway decent for Cleveland to make the postseason, as Watson’s suspension was upped to 11 games.

Brissett didn’t play in Week 1 against Jacksonville, with third-stringer Joshua Dobbs doing much of the heavy lifting, going 10-for-13 for 108 yards and a TD pass. Josh Rosen went 6-for-7 for 56 yards in his limited minutes.

Now that the dust has settled… On the field, the pressure shifts onto Kevin Stefanski.

The #Browns were 6-5 through 11 weeks last year with Baker Mayfield’s bad play at QB. This roster is too talented to not be in a similar spot in 2022.

The schedule makers have blessed the Browns with a soft opening slate, with games against the Panthers, Jets, Steelers and Falcons. Brissett better hope they go 4-0, because six of their next seven are murder: Chargers, Patriots, at Ravens, Bengals, at Dolphins, at Bills and vs Buccaneers.

For Philly, they couldn’t have scripted a better opening for Jalen Hurts — minus that massive cheap shot he took from Quincy Williams.  He should again be getting some reps in Week 2.

The former Alabama QB was 6/6 for 80 yards and a TD in his first 2022 NFL drive. pic.twitter.com/zlmLRSaKiO

Hurts was a perfect 6-for-6 passing for 80 yards and a TD. That included a deep strike to Quez Watkins, and a 22-yard score to Dallas Goedert.

The offense dried up in the second half, with a grand total of zero yards on four drives after halftime. For what it’s worth, Reid Sinnett and Gardner Minshew both threw for 81 yards apiece.

The two teams practiced against each other this week, and play was described as intense, minus any fighting.

For the Browns, they’ll see how Ethan Pocic holds up at center against a traditionally strong Eagles’ defensive line, after they lost starter Nick Harris for the year with a knee injury in the preseason opener.

For the Eagles, it should be another chance for RG Isaac Seumalo to show he’s up for the starter’s role. While Jadaveon Clowney should play, Myles Garrett missed practice this week for personal reasons, so it’s unlikely Seumalo  gets the full brunt of the Browns’ defensive line.

And 2020 first-rounder Jalen Reagor is just trying to hang on to a spot on the roster. With AJ Brown, Devonta Smith, Watkins and Zach Pascal virtual locks as the top four pass catchers, Reagor should at least get more opportunities Sunday, as the starting receivers should play limited reps.

Some interesting tidbits to set your NFL betting strategies in this contest.

The UNDER has dominated in the last four preseason matchups, a perfect 4-0 mark, though the two teams haven’t met since 2018.

Cleveland seeks its sixth straight preseason win and they’re looking to go 15-2 SU and 14-3-0 against the spread since 2016.

Jacoby Brissett with a dime🔥🔥 pic.twitter.com/1xe3fdHOeQ

Minus what Hurts does, Philly’s offense just doesn’t have much juice further down the roster.

Does head coach Kevin Stefanski want Brissett feeling good in his first start since learning he’ll be the man for 11 games? I think so.