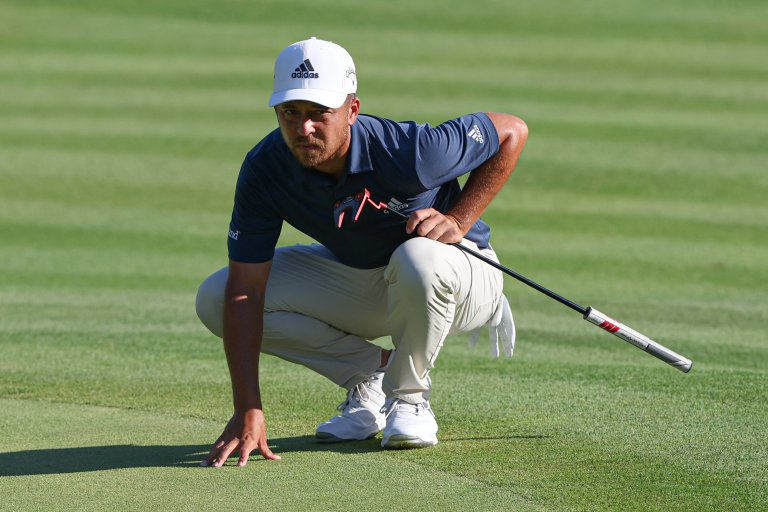 Jun 25, 2022; Cromwell, Connecticut, USA; Xander Schauffele looks over a putt on the 18th green during the third round of the Travelers Championship golf tournament. Mandatory Credit: Vincent Carchietta-USA TODAY Sports

Through 54 holes at the Travelers Championship, Xander Schauffele is clinging onto a slim one shot edge over Patrick Cantlay. Neither player has won an individual PGA Tour event this season, but they both teamed up to win the Zurich Classic in April. The X-Man began Saturday with a comfortable five stroke edge following consecutive 63’s, but Cantlay closed the gap with his own 63 on moving day compared to Schauffele’s 67.

A fascinating story has emerged in the form of 20-year-old amateur Michael Thorbjornsen, who is six back and attempting to become the first amateur since Phil Mickelson in 1991 to win a PGA Tour event.

Before the tournament began, Cantlay was +1400 to win outright, while Schauffele was priced at +2000. Rookie Sahith Theegala is three adrift after a scintillating 64 on Saturday, with Kevin Kisner in fourth position, four behind. It should be a close finish to the end, at least historically, with twelve of the last 15 winners doing it in a playoff or by a one shot margin.

Odds as of June 25th at DraftKings Sportsbook.

This has all the makings of a classic two-man duel between Xander Schauffele and Patrick Cantlay on Sunday, and the betting odds reflect that. X-Man is set at +105 compared to Patty Ice, who is +140, then the next closest pursuer Sahith Theegala is +1200.

Xander Schauffele makes his first bogey of the week at the Travelers Championship on his 49th hole.
His previous-longest streak without a bogey to start a PGA TOUR event: 43 holes (2020 Sentry Tournament of Champions).

Schauffele has been playing phenomenal golf, with just a lone dropped shot in the first 54 holes. He’s tied for first in greens in regulation (47/54) and third in putts per green in regulation. Of his four individual PGA Tour wins (he has a fifth title, in the aforementioned team event), none have been when he’s been out in front heading into the final round. While he won an Olympic gold medal last year, he hasn’t won an individual PGA Tour event since 2019, so it’s hard to go all-in with him.

Cantlay has won five individual tournaments since Schauffele’s last victory. He’s made the most birdies through three rounds (19), and is sixth in strokes gained: tee-to-green, making him a better value play than his competitor.

Sahith Theegala (+1200): Sahith Theegala has had a very strong rookie campaign, posting four top tens, including a T-5th two starts ago at the Memorial. He also very nearly won his first trophy at the WM Phoenix Open in February before a bad break on the 71st hole sunk his chances. Through 54 holes, he’s fifth in SG: tee-to-green and fourth in putts per green in regulation, as he sits just three off top spot.
Kevin Kisner (+2200): Kevin Kisner will have his work cut out, as he’s four behind Schauffele. He’s 15th in final round scoring, with five rounds of 69 or better. Just getting into contention is a huge bonus for him, as he’s missed his last five cuts in individual play. Kisner is first this week in putting, as he’s picked up over a whopping eight shots on his contemporaries on the greens.