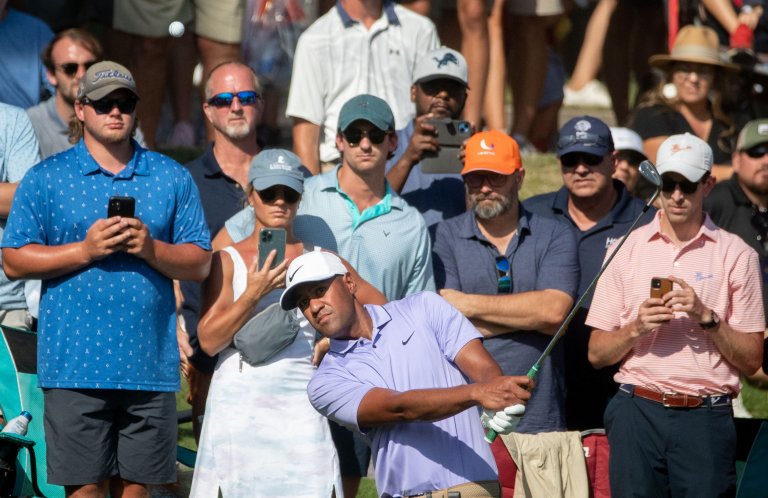 Tony Finau chips at the 18th hole during the third-round of the FedEx St. Jude Championship on Saturday, Aug. 13, 2022, at TPC Southwind in Memphis.

The FedExCup Playoffs culminate with the Tour Championship from East Lake Golf Club, in Atlanta, Georgia starting on Thursday, August 25
Tony Finau leads the field in putting over the past 12 rounds and ranks second in scoring
Read below for our favorite sleepers and longshots to win the FedExCup, and to shoot the lowest overall score without starting strokes

A cool $15 million is on the line this week in Atlanta, Georgia, as the top-30 PGA Tour golfers in the FedExCup standings head to East Lake Golf Club for the Tour Championship.

Unlike traditional PGA tournaments, where everyone starts at even par, golfers will begin the season’s final event with a staggered score based on where they rank in the standings.

Scottie Scheffler will start two strokes clear of Patrick Cantlay, and three shots ahead of Will Zalatoris. Some of the game’s biggest names are six and seven strokes off the lead, forcing online sportsbooks to offer favorable odds on one of them to make a heroic comeback.

Odds as of August 22nd at DraftKings Sportsbook and FanDuel Sportsbook.

As a result of the staggered start, there are two separate ways to hit a winner. You can bet on who will win the FedExCup, aka golf’s ultimate prize, and also who will shoot the lowest overall score without starting strokes.

Looking at course fit and recent performance, it feels impossible to implement a fade on Tony Finau. He ended the regular season with back-to-back wins and hovered around the top of the leaderboard in the first playoff event before finishing fifth.

He leads the field in putting over the past 12 rounds while ranking second in scoring and short gameplay, and fourth in ball striking.

As for course fit, he checks that box in that as well. East Lake is a long, Par-4 heavy track that suits Finau perfectly. He leads the field in both overall Par-4 scoring and Par-4 scoring on holes ranging between 450-500 yards over the past 12 rounds. He also ranks fourth in good drive percentage, a combination of length and accuracy, and fourth in ball striking.

Finau will begin six strokes back but has plenty of familiarity with this course and the firepower to make up ground quickly.

Anytime we get Sam Burns on a Bermuda track such as East Lake, it’s an auto bet. Of course, overcoming a five-stroke deficit this week is a tough ask, but it’s not like we haven’t seen it from Bermuda Burns before.

He erased a seven-stroke deficit en route to his latest victory at the Charles Schwab Challenge, running down none other than world number one Scheffler.

Over the past 50 rounds, he leads the field in strokes gained total on Bermuda courses, while ranking second in scoring and putting. Burns is one of only four players with three titles this season, and there would be no better way to cap off his magical season than with a FedExCup crown.

Joaquin Niemann to Win FedExCup (+7000): Overcoming an eight-stroke deficit is a tall ask, but Niemann profiles as someone who could certainly do it. He ranks top-three in approach shots within 15 feet over the past 12 rounds and 11th in scoring. He’s gained at least 6.4 strokes with his ball striking over the past two events but has been held back by a cold putter. If the flat stick flips this week look out.
Adam Scott to Win Without Strokes (+2500): We’re not asking Scott to erase a 10-stroke deficit, instead betting him to finish with the lowest score without starting strokes. He’s in the midst of his best stretch of the season with back-to-back top-fives, and with a move to LIV Golf likely imminent, there’s no better way to leave the PGA Tour than with one last signature performance.