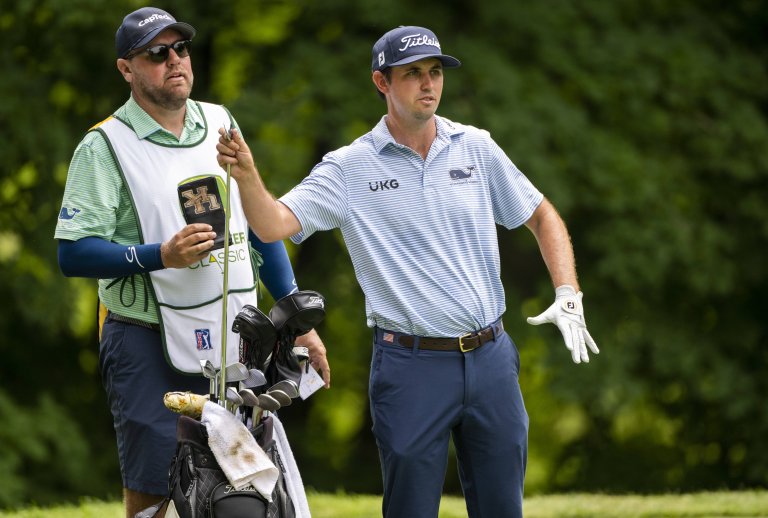 Jul 2, 2022; Silvis, Illinois, USA; J.T. Poston grabs an iron from his bag before hitting his tee shot on the 6th hole during the third round of the John Deere Classic golf tournament. Mandatory Credit: Marc Lebryk-USA TODAY Sports

All the press heading into this week at TPC Deere Run revolved around the lack of star power at this year’s John Deere Classic. The PGA Tour’s biggest names are across the pond preparing for the Open Championship tune-up next week in Scotland, while eight of the top-40 players in the World were teeing it up in Portland for the LIV Golf event.

Despite the lack of elite talent this week at the JDC, the golf has been tremendous. J.T. Poston had led wire-to-wire through three rounds, and is now 18 holes away from his second career PGA Tour victory.

Odds as of July 2nd at DraftKings Sportsbook.

In order to get the job done he’ll have to fend off a trio of players who are all three shots back, but there’s not much evidence this week to suggest he won’t be capable of the task.

Poston’s play certainly isn’t out of nowhere. He finished runner-up just last week at the Travelers Championship, gaining a ridiculous 8.2 strokes with his irons and 5.3 strokes with the putter.

As we headlined earlier in the week in our sleepers and longshots article, the key to success at TPC Deere run is sticking your wedges close and making putts. That was the recipe for Poston’s opening round 62, and he’s kept the momentum going with subsequent rounds of 65 and 67.

J.T. Poston’s 4-under 67 in R3 of the John Deere Classic marks his fifth consecutive round of 67 or better on the PGA TOUR.

After making just a single bogey through rounds 1 and 2, Poston had the slightest of hiccups on the back nine on Saturday with a pair of bogeys. Undeterred, he answered a bogey on 12 with a birdie on 14, and a bogey on 15 with an eagle on 17.

That restored his lead to three strokes, giving him plenty of cushion heading into the Final Round. Poston leads the field in strokes gained tee-to-green this week, while ranking second in ball striking, third in eagles and fourth in birdies. He hit 17 of 18 greens on Saturday, and has now missed just six greens all week.

J.T. Poston hit 17 of 18 greens in regulation in R3 of the John Deere Classic, tying his career record in the category (most recent of 4 occasions: 2020 Shriners Children’s Open)

If he replicates this form on Sunday he’ll be nearly impossible to beat, however that doesn’t mean you should run to the window to bet him. Golf is the most volatile of sports and betting on any golfer at -105 odds, even if they carry a three shot lead into Sunday, can’t be considered a wise investment.

As Poston proved on Thursday with a 9-under par round, and multiple golfers have shown since, you can go real low at TPC Deere Run. Paul Goydos broke 60 here 12 years ago and while it likely won’t take a round quite that low to threaten Poston, any potential horse we back is going to likely need to shoot a low-60’s round.

Denny McCarthy (+500): My favorite option of the trio in second place. McCarthy hasn’t made a bogey in 48 holes and was unlucky to only shoot 67 on Saturday. He’s notorious for being one of the best putters in the world, yet he had his worst putting performance of the week in round 3. McCarthy ranks fifth in the field in ball striking through three rounds and if the putter flips on Sunday, he’ll be in contention to win just like he was in two of his previous three starts.
Christian Bezuidenhout (+3500): He’s shot 65 and 66 in his past two rounds, ranking sixth in strokes gained approach and seventh in putting on Saturday. Like we mentioned earlier, that’s the exact recipe for success at TPC Deere Run.
Sahith Theegala Top-10 (+750): The cover boy for our sleepers and longshots article this week, Theegala was a flop on Thursday. He’s rebounded in fine fashion though, firing back-to-back rounds of 65. He’s been top-10 in the field in strokes gained tee-to-green in two straight days, while recording 13 birdies against only one bogey.