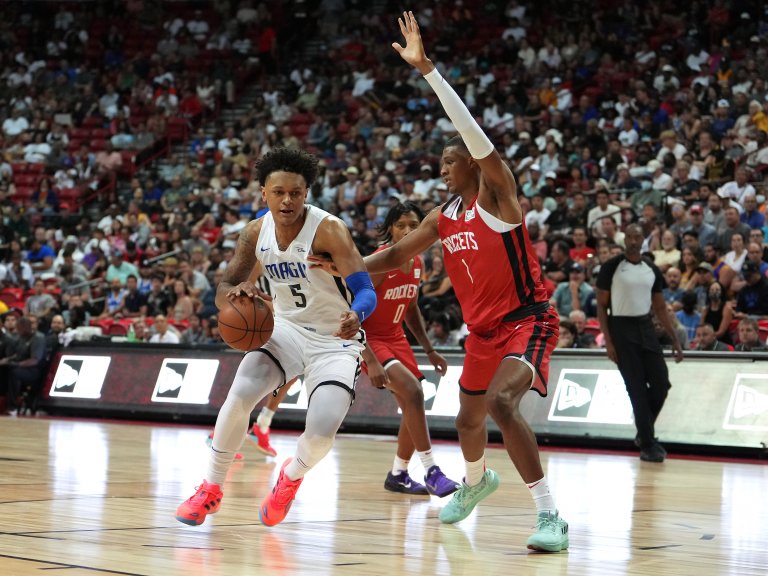 After a dominant Summer League showing, Paolo Banchero has surpassed Chet Holmgren in NBA Rookie of the Year odds
Banchero is sitting at +300, while Holmgren is at +420
Who is the best bet right now? Read on for the odds, analysis, and early pick

With the NBA Summer League now over, we’ve had a first-hand look at the top first-year players who were taken in the 2022 NBA Draft.

Before the festivities began in Las Vegas, Chet Holmgren had the slight edge in Rookie of the Year odds at +360. However, the tables have turned after Paolo Banchero impressed heavily in his short stint in the Sin City, with his odds now at +330 while Holmgren’s have dropped to +420.

Read on for the ROTY odds and analysis.

Odds as of July 18th at FanDuel.

Banchero played just two games in the Summer League because the Magic wanted to give others more opportunities. Basically, Orlando had already seen more than enough from the first overall pick. Banchero averaged 20 points, six assists, and five rebounds while shooting 40% from the field and 50% from downtown on two attempts.

“I have a chip on my shoulder … I just want to go out there and prove why I’m the No. 1 pick every game.”

The ex-Duke standout is seen as arguably the most NBA-ready player in this class and he proved just that in Vegas. Banchero used his physicality and strength to get inside and finish while also showing a lot of promise with his jumper. Also, the rebounding and playmaking were very impressive. It’s totally understandable why he’s a ROTY favorite right now.

Chet Holmgren Definitely in The Mix

“He’s a guy you could consider a unicorn. He’s seven-foot-plus, has every skill of a guard, can shoot the ball. I think he’s gonna have a really good career.”

Holmgren will definitely be in the running for ROTY, but he won’t have the same advanced role as Banchero will in Orlando. Nevertheless, you can expect a solid Year 1 from Holmgren even though he still needs to put on more weight to really bang with NBA bodies.

Smith, Murray, Ivey Worth a Look

Jabari Smith Jr was long believed to be the top pick in the draft but he ultimately fell to the Houston Rockets at third overall. While he did look very good defensively in the Summer League, his offense wasn’t spectacular. Smith averaged 14.4 points while shooting only 25% from three-point land. He did make an impact on the boards with nearly 10 rebounds per night, but Smith is known for his ability to make it rain.

That’s a big reason his odds have dropped, because of the inefficiency.

Keegan Murray is a name that needs to be on everyone’s radar. The Kings rookie took home Summer League MVP after averaging 23.3 points and 7.3 boards. He also shot 40% from deep. Although he might not see as many touches as Banchero will because of the other players on Sacramento’s roster like De’Aaron Fox and Davion Mitchell, the way he played in Vegas is a good sign of what’s to come.

Jaden Ivey is another who could be in the mix for Rookie of the Year. He’s got an extremely high motor and plays a lot like Ja Morant, who he actually spent a lot of time watching while at Purdue because his mother was an assistant on the Grizzlies. Ivey sprained his ankle early on in the Summer League but showed why the Pistons are so excited about him, using his quickness and handle to get to the cup in a hurry.

Rookie of the Year Odds – Banchero is The Pick

It’s early, yes. But there is no question that Banchero is the best bet right now. He’s going to be the main man in Orlando from day one which means there will be every opportunity for the 19-year-old to shine in a big way. Jump on these NBA betting odds.