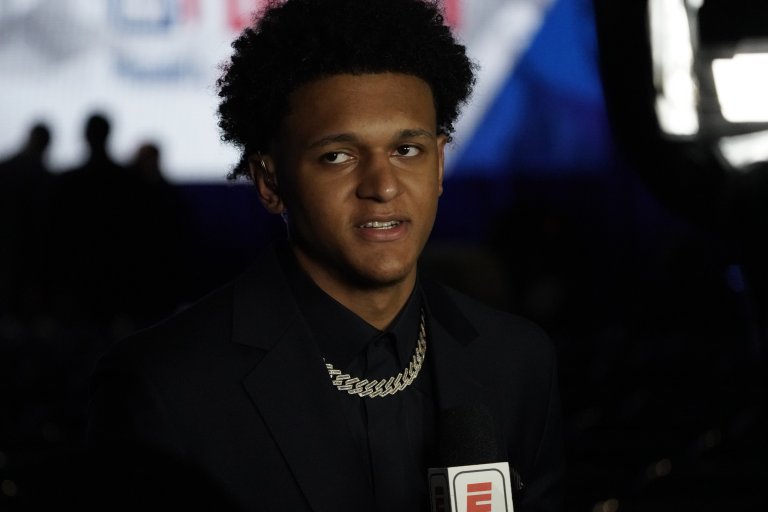 The 2023 NBA Rookie of the Year odds have been released as the draft approaches
Ahead of Thursday night, Paolo Banchero is the slim favorite at +300 odds
Find the NBA ROY odds and analysis below

The 2023 NBA Draft takes place on Thursday night at the Barclays Center and we already have a pretty clear-cut idea of who will go in the top three. Jabari Smith is expected to go to the Orlando Magic at first overall in NBA Draft odds, followed by Chet Holmgren at No. 2 to the OKC Thunder. At third, the Houston Rockets are very high on Duke standout Paolo Banchero, one of the most NBA-ready players in this class.

That being said, the 2023 Rookie of the Year odds have already been released at DraftKings and Banchero currently holds the slight edge over Smith at +300. Read on for the full list.

Odds as of June 23rd at DraftKings Sportsbook.

The 19-year-old freshman out of Duke, Banchero is the type of player who can step into the league and immediately thrive. No matter where he ends up, Banchero is expected to have a pretty big role from day one, and for good reason. The Seattle native is big, long, and strong. He’s 6’10” and weighs 250 pounds.

Paolo Banchero’s ability to create and pass off a live dribble is what makes him special as a 6’10 playmaker. Changing gears, with a head of steam, seeing over the top, and reacting to rotating defenses, he’s the type of player you can run your offense through, especially late. pic.twitter.com/cdbjcI94CK

Banchero already has an NBA body and should have no problems scoring inside against his opponents. Although he can get buckets, what separates him is his ability to impact the game as a rebounder and most importantly, a playmaker.

Banchero averaged 3.2 assists per night and does a tremendous job of getting his teammates involved. He has all the makings of a future superstar. With +300 odds and the maturity Banchero already possesses on the court, he’s a very good bet to win ROTY.

Jabari Smith might not have the same all-around skill set as Banchero, but the Auburn star has the prettiest jump shot of any player in years. His release is fluid and consistent, no matter the situation.

In a day and age where the three-point shot is so frequent, it’s no wonder scouts are loving him. Smith shot a blistering 42% from deep in his lone season with the Tigers to go along with 16.9 points per contest.

Jabari Smith the next number one pick? 👀 pic.twitter.com/XtS6gbjHhX

Also 6’10”, Smith is the definition of a smooth-shooting big. He also made an impact on the boards, collecting 7.4 rebounds per game. Smith had a high usage in college and he’ll undoubtedly get a lot of touches in his rookie season, too. If Smith continues to shoot the lights out at the professional level, ROTY will surely be in the cards.

Does Holmgren Have ROTY Value?

Last year, Holmgren was expected to be the first overall pick in this draft. Things have changed since, but he’s still a very special talent who with time, should turn into a solid NBA player.

At 7’0″ and 195 pounds, Holmgren is a modern-day big man with a decent handle and the ability to make his presence felt inside. However, his frame is a concern, which is why it’ll likely take him a couple of years to really thrive in the Association once he fills out.

The Future of the Assist presented by @StateFarm… “My NBA goals are big; I hope to accomplish a lot. All of the individual accolades come second to the team accolades, so first on my list is an NBA Championship.” – @ChetHolmgren pic.twitter.com/CTEHagi5CA

At +475 odds, it’s always worth a small bet. But, Holmgren isn’t as polished and strong as the aforementioned. There are surely All-Star appearances down the road however I don’t think he’ll win ROTY.

Canadian guard Bennedict Mathurin is an extremely promising prospect who gives off Donovan Mitchell-like vibes. He’s shifty, quick, athletic, and loves to get downhill. Mathurin’s ROTY case depends on where he lands, though. If the Montreal native ends up in Portland, he might not see the minutes that could be available in say, a New Orleans or Charlotte. But, his shot-making ability, defense, and size (6’6″) make him a very interesting player to keep an eye on heading into his first year in NBA. At +1200 Rookie of the Year odds, there’s some sleeper value.

#Sources – Troy Weaver and The Detroit Pistons have reportedly locked their sights on selecting Benedict Mathurin with the 5th overall pick in tonight’s draft. #Pistons #NBADraft

Jaden Ivey out of Purdue is another player to consider in the ROTY race but again, it depends on what team drafts him. He’s lethal in transition and could be the purest scorer in this class. Ivery is extremely quick and likes to attack the cup and has already drawn comparisons to Grizzlies star Ja Morant.  Ivey has the fourth-best odds at +500 behind Holmgren.

Banchero is the best pick. He’s the type of player who can run an offense and impact the game in countless ways. There is a reason why scouts believe he’s the most polished out of the top three. Banchero might not have the ceiling of others in this draft, but he’ll ball out right away in Year 1.