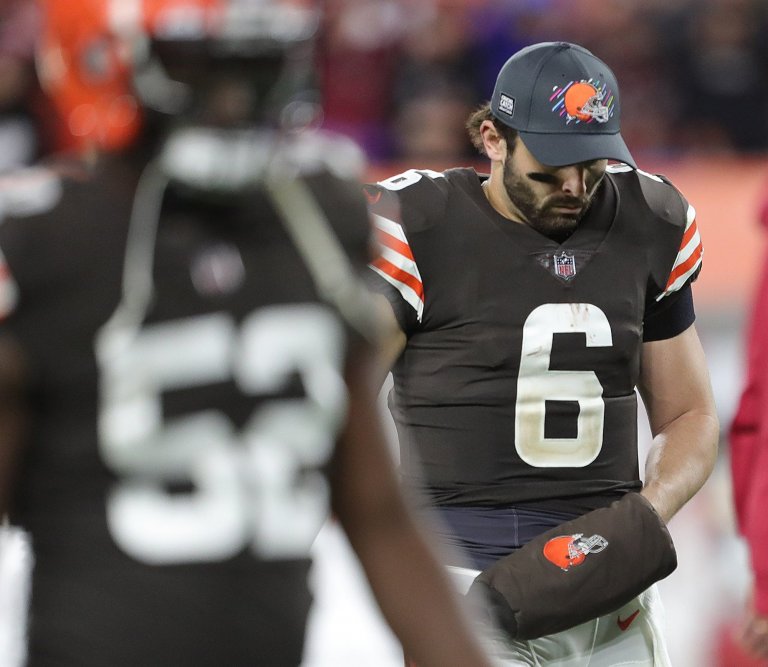 Cleveland Browns quarterback Baker Mayfield (6) hangs his head as he walks off the field following a 37-14 loss to the Arizona Cardinals in an NFL football game at FirstEnergy Stadium, Sunday, Oct. 17, 2021, in Cleveland, Ohio. [Jeff Lange/Beacon Journal]

The Carolina Panthers have acquired Baker Mayfield in a trade with the Cleveland Browns
Carolina’s NFC South title odds slightly improved from +1100 to +1000 after the trade
The Browns are now only 1-point favorites in Week 1 after opening as -3.5 favorites

Upon hearing the news that the Carolina Panthers had acquired quarterback Baker Mayfield from the Cleveland Browns, two questions immediately sprung to mind.

Firstly, why do the Panthers think this move is going to be a difference-maker? Secondly, isn’t Carolina basically replacing Sam Darnold with a different version of Darnold?

Oddsmakers evidently are seeing the trade as being a slight upgrade for Carolina. The Panthers shortened from +1100 to +1000 to win the NFC South in the NFL division odds.

Meanwhile, Cleveland’s betting line to win the AFC North lengthened from +270 to +320.

Is there an NFL team with a more mediocre quarterback room than the Panthers? Last season, Mayfield threw for 17 touchdowns against 13 interceptions.

Can Both Teams Lose a Trade?

Imagine someone telling you that your team could have the first and third pick in the NFL Draft. Would that be something you’d be in favor of doing? On paper, it sure sounds like a positive development in terms of NFL betting strategies.

Well, that’s what Carolina now has – the first (Mayfield) and third (Darnold) overall picks of the 2018 NFL Draft. All it cost them was a conditional fifth-round draft pick to get Mayfield. Word is Cleveland is even going to pick up $10.3 million of Mayfield’s salary. And yet, it all feels like such a bad idea.

First look at Baker Mayfield as a Carolina Panther pic.twitter.com/mghDNKLRZ2

A year ago, the Panthers were dealing second, fourth and sixth-round draft choices to the New York Jets for Darnold. They will be paying him $18.155 million this season, likely to sit on the bench behind Mayfield. Just last week, the Panthers were raving about how well Darnold was working with the team’s new offense. He was heavily favored to be Carolina’s Week 1 starting QB.

It’s a different sport but the other day, Detroit Red Wings GM Steve Yzerman was discussing the anatomy of trading. Believe it or not, Yzerman proclaimed, professional sports teams don’t just make trades for the sake of making trades.

Evidently, the Panthers do.

Cleveland Botched This, Too

While busily pointing out the flaws of the Panthers, let’s not forget how much of a run for their money the Browns are giving them in the ineptness department.

Cleveland dealt to get All-Pro QB Deshaun Watson from the Houston Texans. The Browns were either unaware or didn’t care about the legal troubles surrounding Watson. He’s facing over 20 civil suits, accused of sexually harassing and sexually assaulting dozens of female massage therapists.

Robby Anderson after seeing his QB is either Sam Darnold or Baker Mayfield pic.twitter.com/eH9clyP0oF

The NFL held hearings last week to determine whether to suspend Watson under the league’s personal conduct policy.  Meanwhile, Mayfield, as big a diva in football cleats as there’s ever been, was deeply hurt that the Browns were turning away from him. He wasn’t about to consider helping the team out in their time of need. Their divorce was final.

That’s likely leaving Cleveland’s offense in the hands of Jacoby Brissett. The Browns should’ve checked with the Indianapolis Colts to see how that works out (Narrator’s voice: Not well).

Well, well, isn’t this interesting – in Week 1 of the NFL regular season on Sept. 11, the Browns are at Carolina. Cleveland was a 3.5-point pick. The Browns are now down to 1-point favorites. Think Mayfield might be a bit fired up for that game?

Overall, both teams are today further away from their objectives than they were prior to this deal. In the NFL conference odds, Cleveland jumped from +1200 to +1400 to win the AFC title. Carolina’s NFC title odds grew to +6000 from +5000.

Both QBs haven’t made a single Pro-Bowl in their careers.

The #Browns and #Panthers play each other Week 1. pic.twitter.com/NEO0uFZzqZ

Oddsmakers have taken the Browns right off the board in terms of NFL win totals and in the NFL playoff odds. They were at 8.5 wins, -150 to make the playoffs and +300 to miss the postseason.

Carolina is at 6.5 wins. That’s actually an increase from the Panthers’ opening line of 6 wins. They remain +450 to make the playoffs. However, Carolina’s line to miss the playoffs has shortened from -650 to -550.

No matter the play you might be considering, the best bet here is to shove that money down deeper into your pocket.