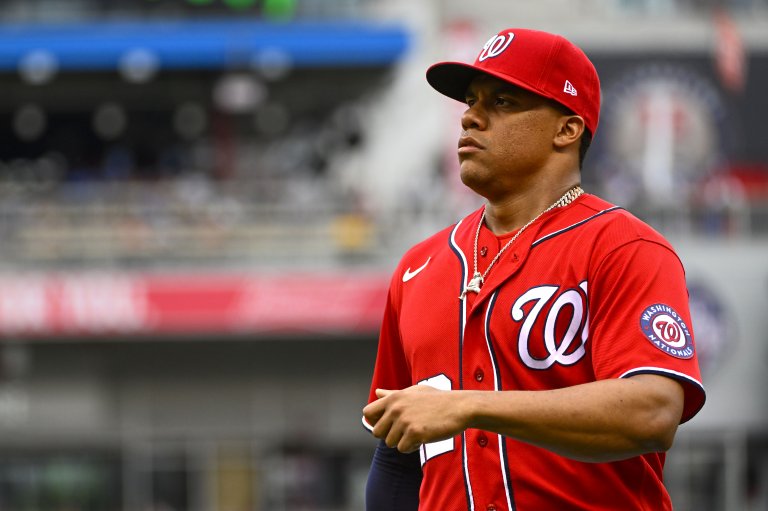 The San Diego Padres made their second major acquisition in as many days, adding outfielder Juan Soto from the Washington Nationals
On Monday, the Padres picked up closer Josh Hader from the Milwaukee Brewers
San Diego’s World Series odds have shortened from +2000 to +800

The San Diego Padres are making moves on the diamond and in the World Series futures.

Tuesday, San Diego added the most sought-after player at the MLB trade deadline. They acquired outfielder and two-time All-Star Juan Soto from the Washington Nationals.

Shortly after the deal was announced, the World Series odds on the Padres shortened from +2000 to +800.  San Diego went from the #8 favorite to win the Fall Classic to #5.

San Diego has never won the World Series. The Padres were swept in the 1998 World Series by the New York Yankees and fell to the Detroit Tigers in the 1984 World Series in five games.

At odds of +800, the Padres are offering an implied probability of victory of 11.11%. A successful $10 wager on San Diego winning the World Series would return a payout of $90.00.

The Padres have improved to +475 in the MLB pennant odds.

Soto Most Sought After Player

Soto recently rejected a 15-year, $440-million contract offer from the Nationals. That was when the decision was reached to place him on the trading block. He won’t become a free agent until 2024, giving the Padres at least two years with Soto in their lineup after this season.

Juan Soto will be the 1st player in MLB history, age 23 or younger, to change teams midseason the year he was an All-Star.

Hosmer’s no trade clause vetoes a move to the Nationals. However, published reports were indicating that even without Hosmer, the two sides will still find a way to make the deal work.

On Monday, the Padres were adding closer Josh Hader from the Milwaukee Brewers. San Diego was sitting with the #2 closer in terms of saves in Taylor Rogers. But they opted to deal him to Milwaukee in order to get Hader, the MLB save leader with 29.

With Josh Hader & Juan Soto, the Padres would be the 8th team to acquire 2 players midseason, both who were All-Stars that season, joining:

The difference is that Rogers has also blown seven saves this season, compared to two blown saves for Hader.

Are Padres Worth a World Series Wager?

BREAKING: Juan Soto is going to the Padres, per @JeffPassan ? @BRWalkoff

Even with the additions of Soto and Hader, it would be wrong to project the Padres as the team to beat in the World Series hunt. At the same time, their chances to win it all just grew significantly stronger.

At +800, San Diego is worth a small wager but don’t bet the farm on the Padres.