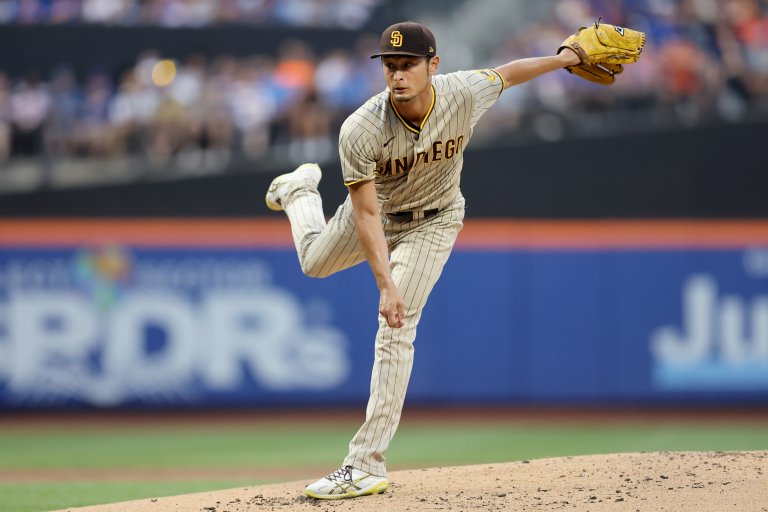 The Padres and Tigers wrap up a three-game set on Wednesday afternoon
San Diego is a -140 favorite with Yu Darvish on the mound
Read on for the Padres vs Tigers odds, preview, and betting prediction

The San Diego Padres (55-44, 30-23 away) and Detroit Tigers (39-59, 24-27 home) will conclude a three-game interleague series on Wednesday afternoon at Comerica Park. The first pitch is scheduled for 1:10 PM ET. This is just the third meeting between these teams since the 2017 season.

The Padres send Yu Darvish to the hill while the Tigers counter with their ace, Tarik Skubal.

Odds as of July 26th at Caesars Sportsbook

The Padres are a -140 favorite for the rubber match and have won two in a row when Darvish is pitching.

Darvish is in the midst of a very decent campaign for San Diego. In 18 starts, he’s 9-4 with a 3.28 ERA, striking out 109 in 115.1 innings of work and walking just 23 batters. He’s also given the Padres lots of longevity lately, tossing seven innings in each of his last three starts. In the process, the righty has allowed just five earned during that span.

On July 22nd against the Mets, Darvish surrendered a mere one run on four hits while striking out nine. In seven career outings vs Detroit, the 35-year-old owns a 7-0 record and 3.47 ERA. Certainly a good sign ahead of Wednesday.

Skubal has been one of Detroit’s lone bright spots this season and he could potentially be on the move at the trade deadline. Nonetheless, he’s excelled all year long, making 19 starts and posting a 3.88 ERA. His 7-8 record comes down to the lack of run support, but Skubal has proven to be a strikeout machine, sitting down 111 hitters in 106.2 innings of work.

Tigers would be ‘willing to trade’ Tarik Skubal and ‘just about everyone’ is available for trade as well, per @Ken_Rosenthal pic.twitter.com/VI6FJkJSDa

He did struggle in June and into July as well, but the southpaw shoved last week, tossing six frames and allowing zero earned runs. Skubal only gave up two hits, too, and struck out nine A’s hitters. He’s never faced the Padres, though.

San Diego has been without their superstar Fernando Tatis Jr all season and that’s definitely hindered their ability to compete with the Dodgers. As of Tuesday, the Padres remain 11.5 games behind them in the NL West but do sit in a Wild Card spot at the moment. That gap is reflected in the MLB Division odds as well.

Still thinking about how this somehow stayed in ? pic.twitter.com/ShPmWJkkfb

Prior to Tuesday’s contest, San Diego is just 4-6 in their last 10 games as well and has not been playing very well since the All-Star Break, despite the stellar play of Manny Machado, who is +550 in NL MVP odds.

Not much is going right for Detroit in 2022. They have arguably the worst offense in baseball and their pitching staff isn’t anything to write home about, either. However, the Tigers tend to play a lot better at Comerica with a 24-26 as opposed to 15-32 away.

This Candy is Red Hot. pic.twitter.com/MEUcbn6aPo

The bad news? After Wednesday’s finale, Detroit heads on the road for a pair of three-game sets against the Blue Jays and Twins, respectively.

It’s tough to look past Darvish’s flawless record against Detroit. Yes, Skubal bounced back with a quality outing last time out, but I do think the Padres have the edge here with one of their best starters on the bump.