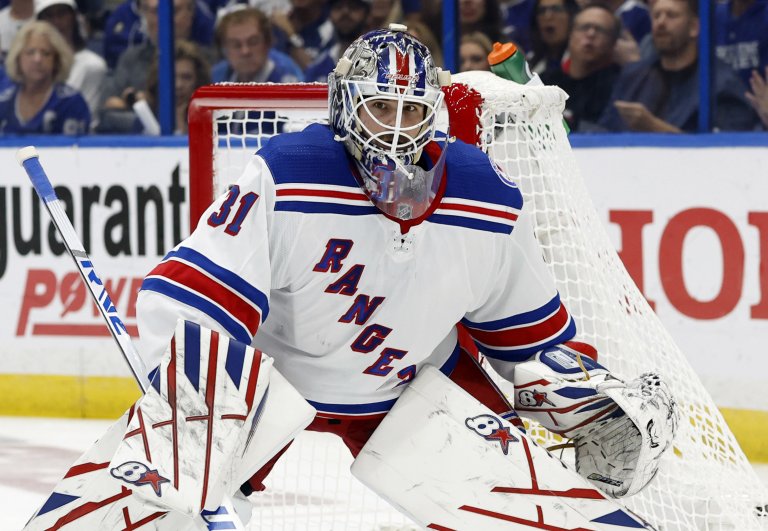 Opening 2023 Vezina Trophy odds have been released with the offseason NHL goalie carrousel winding down.  Now that each team’s starting goalie for 2022-23 is practically set, we can provide you with our Vezina analysis and best bet.

Oddsmakers have made last year’s winner, Igor Shesterkin, a heavy +250 favorite in the Vezina Trophy odds to repeat as the winner. However, this award has been very unpredictable in the last decade, with no repeat winner since Martin Brodeur captured the trophy in 2007 and 2008.

Let’s look at the odds for the top 20 goalies and give you some good predictions and our best pick to win this upcoming season’s Vezina Trophy.

Considering the Vezina is an award without a lot of repeat winners in recent times, Shesterkin is big chalk at +250, which gives him an implied probability of 28.57% to win it for the second consecutive year.

Based on his performance last season, Rangers’ Russian netminder Igor Shesterkin deserves to be the favorite in the opening 2023 Vezina Trophy odds. He absolutely dominated last season and received 29 of 32 first-place votes to win the 2022 Vezina in a landslide.

Shesterkin’s .935 save percentage was 10 points higher than the next best goalie, Ilya Sorokin, out of the netminders who played at least 50 games. He also comfortably led the league in goals-against average and goals saved above expected.

It was more debatable whether Shesterkin would win the Hart, which he was a finalist for, as he had the Vezina locked up with his incredible year. Still, history dictates that it will be somebody else’s turn this year, and at odds of +250, you’re not getting a great bang for your buck if you pick Shesterkin to repeat.

The odds definitely should be taken into consideration when you make your Vezina Trophy pick. Last year was Shesterkin’s first full season as an NHL starter, so there will be more film on him and more teams will be ready to break him down and pick those holes.

While it’s unlikely someone will come out of nowhere to win this year’s award, there are a couple of longshots that should be strongly considered in the 2023 Vezina Trophy odds.

Jordan Binnington seems like a good value play at +3000. He’s got a chip on his shoulder after having his playoffs ended early and is back in the saddle as the legitimate number one in St. Louis with Ville Husso’s departure to Detroit.

Binnington with the save pic.twitter.com/P2cNCMRmlR

Binnington is only 29, already a Stanley Cup champion, and playing behind a sound and solid team. While he has faltered in the regular season the last couple of years, he had a 1.72 GAA and .949 save percentage in six playoff games last year.

Shesterkin’s former backup, Alexandar Georgiev is also a longshot to consider at odds of +3500. He was signed by the Avalanche last week and it’s always a positive to be backstopping the favorites in the Stanley Cup odds.

“Hearing that the Stanley Cup champions believe in you and believe you are the guy, that’s all I ever wanted. I believe in myself. I am working hard to prove they’re right.”#GoAvsGohttps://t.co/ZACSb5oNrD

Colorado’s defense should be even better this year than last season. Josh Manson will be on the blue line from opening night and Bowen Byram will only get better after a tremendous rookie season and playoff campaign. This should add up to a very strong year for Georgiev in his first season with the Avs.

The best bets to make for this year’s award are the guys that sit just outside the top three favorites. Juuse Saros (+1000), Thatcher Demko (+1800) and Jake Oettinger (+1800) all have a terrific chance to win this year’s award.

It seems as if Saros flies under the radar when people talk about the best goalies in the league. He was third in Vezina Trophy voting last year and finished sixth the year before. Nashville’s acquisition of Ryan McDonagh fortifies the defense and you can bet the 27-year-old Saros is over the moon about his new rearguard.

anyways, here’s an absolutely increible save by Juuse Saros pic.twitter.com/JkdoBkRat0

Like Saros, Demko was a workhouse last year. He played the third most games of any goalie in the league, and to win this award, you’ll have to play at least 50 games, something only 17 goaltenders did last year.

While Demko’s numbers last year don’t pop out, he was much better after Bruce Boudreau took over behind the bench, going 25-11-6 with a 2.61 GAA and .918 save percentage after Travis Green was replaced.

Lastly, the youngster who stole the spotlight and almost a first-round series against the Flames, Jake Oettinger. He was the revelation of the 2022 NHL postseason, posting a ridiculous .954 save percentage and 1.81 GAA. It’s got fans all over the league salivating to see what he can do for an encore this year.

Greatest playoff goaltending performance I’ve ever seen in my life by Jake Oettinger.

Although Shesterkin was far and away the best goalie in the league last year, the 2023 Vezina Trophy odds are too heavily weighted in his favor at +250, and he doesn’t have enough experience to justify taking the action at that money.

When weighing all the factors, our prediction is to take Demko with odds of +1800. Although the Canucks didn’t make the playoffs last year, they played much better after the coaching change (32-15-10 under Boudreau) and teams like the Flames will likely take a step back this year.

This Thatcher Demko brilliancy happened back in November and we STILL can’t get over it! 😧 pic.twitter.com/6YbxcZexRZ

My second choice would be Saros at +1000 as he is poised for another strong year, especially with an improved team in front of him. But at +1800 odds, the 26-year-old Demko is the pick here.