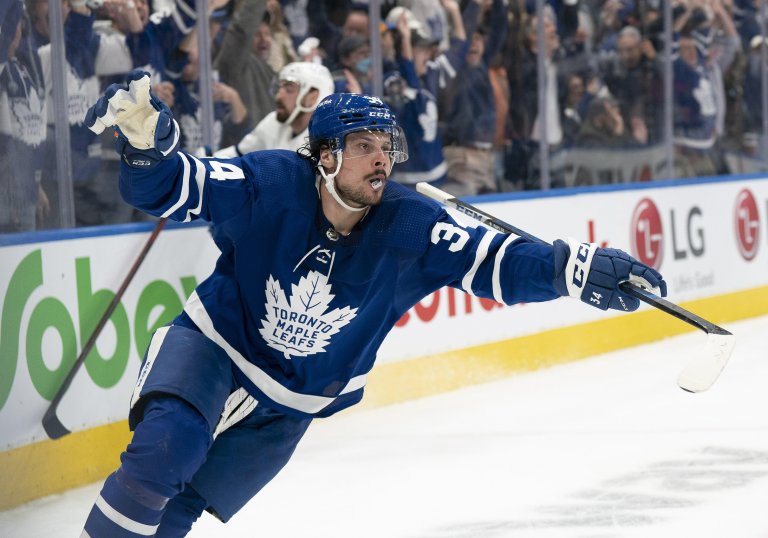 May 10, 2022; Toronto, Ontario, CAN; Toronto Maple Leafs center Auston Matthews (34) celebrates scoring the winning goal during the third period of game five of the first round of the 2022 Stanley Cup Playoffs against the Tampa Bay Lightning at Scotiabank Arena. Mandatory Credit: Nick Turchiaro-USA TODAY Sports

Online sportsbooks have released Rocket Richard Trophy odds for the 2022-23 NHL season. Toronto’s Auston Matthews is once again favored to lead the NHL in goals after exploding for a 60-goal season in 2021-22.

Edmonton Oilers’ forward Leon Draisiatil is the second-favorite in the 2023 Rocket Richard Trophy odds, while nine-timer winner Alex Ovechkin is available as a +1000 longshot.

Let’s analyze the opening 2023 Rocket Richard Trophy odds and give you our best bet.

The Maurice “Rocket” Richard Trophy is presented annually to the player who finishes the regular season with the most goals. Playoff goals aren’t counted in the Rocket Richard stats.

To the surprise of nobody, Toronto Maple Leafs’ star Auston Matthews is favored to win the Rocket Richard Trophy in 2023. The 24-year-old led the NHL with 60 goals last season, capturing the Hart Trophy as league MVP in the process.

While Matthews is the obvious favorite, his price tag in the Rocket Richard odds suggests he isn’t a lock in the view of the oddsmakers. Matthews is listed at +300 at Ceasars Sportsbook, giving him only 25% implied probability to win.

Matthews has won the Rocket Richard Trophy in back-to-back seasons, scoring 101 goals in 125 games across that span. While Matthews’ goal-scoring pace is absurd, there are seven other players who have scored at least 70 goals in that span.

Edmonton Oilers’ superstar Leon Draisaitl is listed as the second-favorite at +500 in the opening 2023 Rocket Richard odds. Draisaitl has never won the Rocket Richard Trophy, but he finished just five goals back of Matthews in 2021-22.

Draisaitl is a special talent in his own right, but his betting value is bolstered by the fact he plays with Connor McDavid on Edmonton’s lethal power play. The German forward scored a whopping 24 of his goals last season with the man advantage.

Draisaitl certainly has the capability to win the Rocket Richard Trophy, as he’s scored 86 goals over the past two seasons. If you believe Matthews will cool off at some point, betting Draisaitl at +500 in the NHL preseason is pretty solid value.

When it comes to betting Rocket Richard Trophy longshots, you need to take past history into consideration. NHL goal-scoring is a landscape that tends to get dominated by a few particular names over an extended period of time.

Alex Ovechkin is the most intriguing Rocket Richard longshot for 2023 considering he’s already won the trophy nine times. While Ovi’s +1000 price is appealing, “the Great Eight” is now in his late 30’s and playing on a Washington team that has dropped off in talent.

A better longshot bet in the 2023 Rocket Richard odds is an up-and-coming star such as Minnesota’s Kirill Kaprizov (+1200). The Russian winger scored 47 goals in 81 games last season and is a top-five candidate in this year’s Hart Trophy odds.

There’s no shortage of value to be found in the 2023 Rocket Richard Trophy odds. Even though Matthews has been scoring at a ridiculous pace over the past few seasons, oddsmakers are still giving bettors the opportunity to get the Leafs’ star at a juicy +300 for the Rocket Richard.

Matthews is a solid play given his price tag, but Draisaitl has slightly more upside. The 26-year-old appears destined for a monstrous 2022-23 campaign after helping carry Edmonton to the 2022 Western Conference Final while playing on a sprained ankle.

Matthews is rightfully getting all the attention for his accomplishments, but Draisaitl has scored just six fewer goals than the Toronto star since 2018. Our best bet for the 2023 Rocket Richard Trophy is Draisaitl at +500, with a sprinkle on Kaprizov at +1200.