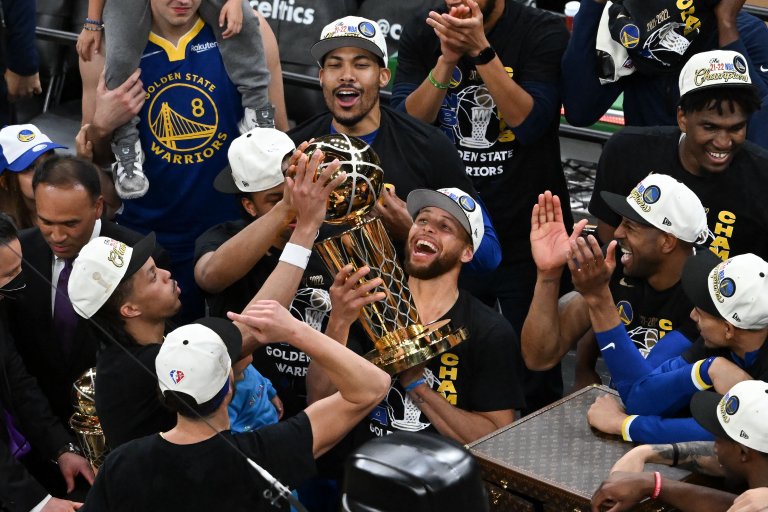 The Warriors’ after-party following their latest championship is likely still going, but that didn’t stop oddsmakers from releasing the opening 2023 NBA title odds for next season.

Golden State is the favorite to repeat in 2023, followed by a Boston team they just dispatched in six games in the NBA Finals.

The Warriors’ +600 price tag is narrowly ahead of the Celtics, Clippers, and Bucks in the NBA Championship odds, while the Nets and Heat make up the top-six.

Golden State began the 2021-22 campaign with the third shortest price at +900, and given their roster construction there’s no reason to think they won’t be among the final few teams standing again in 2023.

For starters, Steph Curry is fresh off the greatest postseason of his career. He’s clearly still at the top of his game, and has cemented himself as a top-10 player of all-time.

Only 6 players in NBA history have 4 rings, multiple league MVPs, and a Finals MVP:

All he cares about is winning titles, and he’ll be motivated to add yet another ring to his collection. Fellow Splash Brother Klay Thompson is still a key piece after a nearly two-year absence, and a full off-season of recovery will have him primed for a big 2022-23 campaign.

Draymond Green is as versatile and valuable as ever, while the emergence of Jordan Poole and Andrew Wiggins gives Golden State two more legit scoring options.

This moment between Andrew Wiggins and Jordan Poole is everything ? pic.twitter.com/8Q72eAo7Ot

2020 number two overall pick James Wiseman should be ready to contribute on a full-time basis down the middle after a pair of injury-riddled seasons, while Jordan Kuminga also flashed a ceiling during the playoffs giving the Warriors plenty of depth in the front court.

When you think Golden State you think offense, but their defense is extremely underrated. They finished sixth in defensive rating during the regular season and just held the high powered Celtics below 98 points in three consecutive games.

The Warriors will be a threat yet again, the question will be can you stomach their short price tag?

Boston and Bucks Beasts in the East

Speaking of short odds, the Celtics’ price will also be tough to swallow. Boston has the luxury of not having to sign any major impending free agents, as the Big 3 of Jayson Tatum, Jaylen Brown and Marcus Smart are all under contract for the next couple seasons.

“The future is bright and we’re just getting started,” Ime Udoka says.

Same goes for big man Robert Williams III, while Al Horford has a year left but may be looking for a raise given his stellar postseason.

Boston doesn’t own a first round pick in this month’s NBA Draft and has virtually no cap space, so the team we just watched in the Finals is likely who we’ll see next season. That still makes them a legitimate contender, however, the Bucks seem like a more enticing wager at a better number.

Milwaukee had the Celts on the ropes in the second round up 3-2, even without the services of Khris Middleton. The 30-year-old is easily the second-best offensive player on the team, and the Bucks struggled to get timely buckets in Games 6 and 7 versus Boston without him.

Giannis Antetokounmpo is an MVP candidate each and every season and we should expect Milwaukee to bolster their bench depth to give them the ammunition to make another title run.

If you want to venture a little further down the odds board, don’t sleep on Memphis +1600 opening 2023 NBA title odds. The Grizzlies finished second in the West this past season and were one of the few teams ranked inside the top-10 in offensive and defensive rating.

They gave the Warriors all they could handle in the second round even without superstar Ja Morant for half of the series, and they have two first-round picks in the upcoming draft.

Given Memphis’ track record of identifying young talent, like their Desmond Bane and Dillon Brooks picks as late first and second-round values, we should expect the incoming first-rounders to make an impact.

They can also clear upwards of $20 million in cap space should they let Kyle Anderson and Tyus Jones walk, opening up the door to bring in a proven veteran as well.