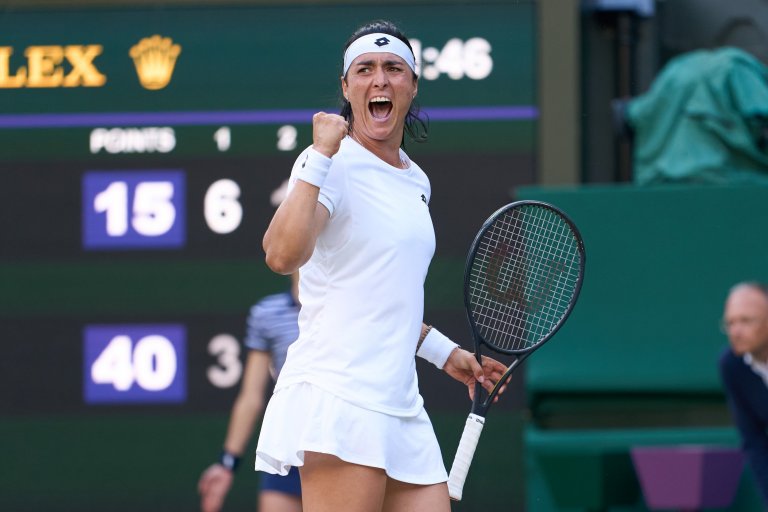 The semifinals for Wimbledon women’s singles play will take place on Thursday
Ons Jabeur and Tatjana Maria will go head-to-head
Below we provide odds, breakdown the match, and give our best bet prediction

Then there were four. The semifinals have been set for women’s singles play at Wimbledon, with Ons Jabeur and Tatjana Maria facing off in one of the two matches being played on Thursday.

Both Jabeur and Maria put together comeback wins in the quarterfinals, when they dropped the first set against their opponents.

Odds as of July 6th at Caesars Sportsbook.

With her quarterfinal win, Jabeur became the first Arab or North American player to ever reach the semifinals of a major, and she’s only 27-year old.

Tunisia’s Ons Jabeur becomes the 1st Arab or North African player to ever reach the semifinals of a major.

The World No.2 comes back to beats Marie Bouzkova 36 61 61 to make the #Wimbledon semifinals. pic.twitter.com/Vyro4HxqyB

It wasn’t an easy match, as the 27-year old saw herself down a set against opponent Marie Bouzkova. This was the first set Jabeur had dropped all tournament.

Jabeur then came out strong in the second, with a point to prove, and managed to secure to win in an additional 47 minutes. To put it in perspective, the first set alone took 42 minutes to complete.

The 34-year old’s fairytale at Wimbledon continues as she defeated fellow German Jule Niemeier in a three set battle, winning 4-6, 6-2, 7-5.

Maria didn’t look to confident coming into the match, despite her impressive upset over Jelena Ostapenko in the round of 16. In her opening set against Niemeier, Maria committed 17 unforced errors, and was not looking like herself.

She came out in the second set looking like a different player, and managed to take control, winning easily 6-2. But in the decider it was a lot of back and forth between the two. Ultimately Maria took the match, that looked like it could go either way at many times from start to finish.

Now, Maria has earned her spot in her first Major semifinal in what is her 46th Grand Slam appearance.

Jabeur currently holds the 2-1 head-to-head edge against Maria, having won their first and most recent match.

Their first match dates back to 2014, with their most recent play happening in 2018. It’s been four years since these two have gone head-to-head against one another. The biggest difference since the last time they played each other would be how far Jabeur has come in her career. She’s now ranked second in the world.

These two consider each other good friends, a friendship that goes beyond the tennis court, with Maria consider Jabeur basically family.

The 27-year old is heading into this match with -800 odds to win, and move onto the finals, but this is sure to be an exciting match. These two have a fairly similar style of play, that includes power, agility, and variety.

Fatigue is also a topic of discussion this close to the end of a Grand Slam. Jabeur has had just the one match go the distance, minimizing the time she’s spent on the court. Whereas, Maria has seen four of her five matches go three sets, resulting in over 10 hours of court play.

Yes, Jabeur suffered a bit of an injury not long ago, but there’s not indicating that that will affect her at this time, as it hasn’t yet, so it shouldn’t be of concern.

Look for Jabeur to earn herself a spot in the Wimbledon final.