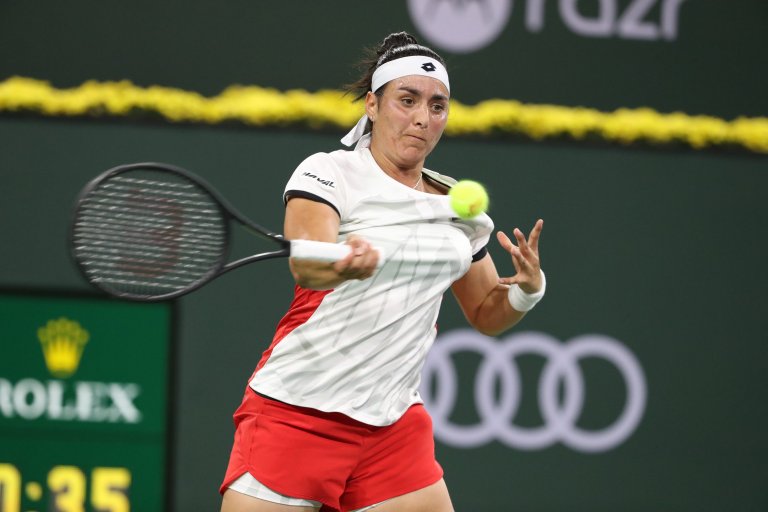 Ons Jabeur returns a shot to Paula Badosa in their semifinal match at the BNP Paribas in Indian Wells, Calif., on October 15, 2021.

The winner of the bett1open semifinal between Ons Jabeur and Coco Gauff is expected to win it all
Jabeur is the slight favorite, as she looks for her second career title on grass
Gauff holds a 3-1 head-to-head advantage; we break down the Jabeur vs Gauff matchup and make a prediction

Ons Jabeur is the favorite against 18-year-old Coco Gauff in their bett1open semifinal, scheduled for 10 am ET Saturday in Berlin, Germany.

And that, despite the fact that Gauff leads Jabeur 3-1 in their four previous meetings.

Odds as of June 17 at BetMGM. Get this BetMGM promo code this weekend here to bet on this match

They were the two top favorites to win the bett1open before the tournament began.

And the winner is expected to defeat the winner of the other semifinal between Maria Sakkari and Belinda Bencic.

Gauff Inexperienced, But Successful on Grass

This is only the fourth grass tournament of Gauff’s career. But she made her name with her very first one.

Just 15, Gauff barely broke a sweat in getting through the qualifying in 2019. And then she upset three veterans in a row – Venus Williams in the first round, fine grass-court player Magdalena Rybarikova in the second, and slicer Polona Hercog in the third round before losing to Simona Halep in the round of 16.

It was a big deal, although there was certainly an element of three successive grizzled veterans playing in abject terror of being beaten by a 15-year-old.

Gauff, ranked No. 313,  was insouciant; she just kept putting the ball in the court.

The American didn’t play for another two years on grass because of the pandemic. By then, she was in the top 25.

But Gauff lost in the second round at Eastbourne to open the season. She made the second week at Wimbledon on the strength of a great draw – No. 211 Francesca Jones, No. 370 Elena Vesnina (who was comig back from maternity leave) and No. 102 Kaja Juvan were her first three opponents.

Won the first on Tuesday vs Elise Mertens after losing 1st set 6-0. Just lost today to Anastasija Sevastova, a clever player with variety who has troubled Gauff before#getty pic.twitter.com/hJeMvwHWTZ

Separated by nearly a decade, Gauff and Jabeur have met four times in less than two years. And Gauff has won three of the four matchups.

But this will be their first meeting on the grass.

The variety – and the drop shot – that has propelled Jabeur to the top four is just as effective on the grass as it is on the clay. A lot of that is the shakier footing.

what a dropshot by Ons Jabeur #Wimbledon pic.twitter.com/rH50RNDyvo

Jabeur has used it well on the grass, although Gauff is quick as lightning.

The Tunisian’s grass debut was nearly a decade ago, in a rather auspicious venue as the 2012 London Olympics tennis event was held at the All-England Club.

Ranked No. 279 at the time and an “international selection” for the event, Jabeur fell 7-5 in the third set to 2014 Wimbledon finalist Sabine Lisicki.

Jabeur will look to sweep the trophies when she takes the court again with @EllenPerez95 in the doubles final. ?#VikingClassic pic.twitter.com/R37BsmSjhb

Jabeur has three ITF titles on the grass, including the $100K in Manchester back in 2018.

More pertinently, she won her first career WTA Tour title at Birmingham exactly a year ago. It was pretty historic, too.

She followed that up by beating Venus Williams, Garbiñe Muguruza and Iga Swiatek at Wimbledon before Aryna Sabalenka took her out in the quarters.

Both players have had great moments on the grass.

Both players are currently at their career-high rankings.

And Gauff is coming off a solid win over 2021 Wimbledon finalist Karolina Pliskova in the bett1open quarterfinals that likely answered a few questions after such an exhausting fortnight making the singles and doubles finals in Paris.

It sets up to be an epic– and it could well be Gauff’s week if she’s not too overconfident coming in.