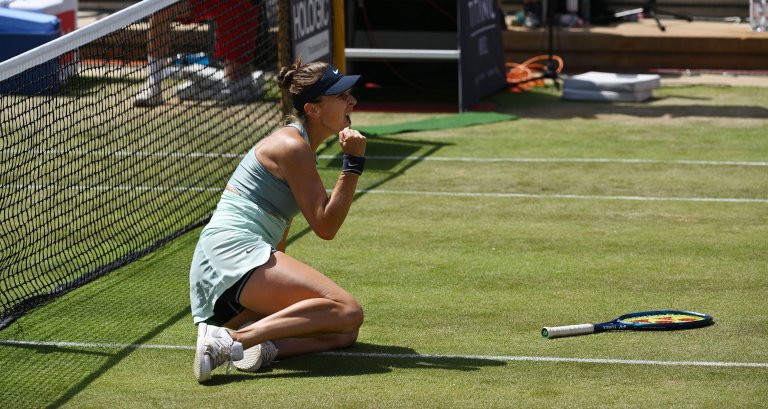 Belinda Bencic celebrates after a marathon win over Maria Sakkari in the bett1open semifinals. The final will be Jabeur vs Bencic (photo: bett1open / Paul Zimmer).

No. 1 seed Ons Jabeur meets No. 8 Belinda Bencic for the bett1open singles titles on Sunday, June 18 at 9:30 a.m. ET
Jabeur is the slight favorite to win her second career grass-court title
Read on as we break down the Jabeur vs Bencic matchup and make a prediction

Only American Coco Gauff was a bigger pre-tournament favorite to win the bett1open tournament in Berlin than Ons Jabeur.

And Jabeur, a 27-year-old from Tunisia, took care of the frontrunner in Saturday’s semifinal, defeating her in straight sets.

Odds as of June 17 at BetMGM. Get this BetMGM promo code this weekend here to bet on this match

Jabeur will now take on No. 8 seed Belinda Bencic, who reached the final in Berlin a year ago and was our longshot pick to win the tournament at +1200.

Gauff Runs Out of Gas

Despite being a decade older than her opponent, Jabeur had a very similar resumé to Gauff, who was as precocious as Jabeur was a late bloomer.

In their semifinal, the younger American ran out of energy – as often happens when you play an excellent first set late in the week, but don’t win it.

Gauff hadn’t dropped a set in her first three matches. But on a scorcher of a day, the cumulative fatigue from reaching both the singles and doubles finals at the French Open combined with another deep run this week hit, all at once.

It was such a hot day in Berlin 33°C, the hottest of the year but summer has not officially started.

She’s such a well spoken young woman with a bright future pic.twitter.com/MDa4jsBvxa

There was a lot at stake, which didn’t help. A win would have meant Gauff’s first visit to the top 10 in the WTA rankings.

Bencic, at 24, is looking for her first grass-court title since 2015, as she fell one step short a year ago in Berlin.

“You have to be this good to beat Coco … She’s a great player.”

Jabeur won a year ago in Birmingham, which is also being played this week. But she chose the stronger field in Berlin in 2022, and is making good.

She has dropped just one set in four matches (a tiebreak to Aliaksandra Sasnovich in the quarterfinals) on her way to the final.

It took Bencic over three hours to finish off Maria Sakkari.

At 3h-7, it made the top-10 longest matches of the season on the WTA Tour.

It set up to be a three-setter right from the jump, and in the end it didn’t only go the distance, it went on forever before Bencic finally converted on her third match point.

Bencic has needed three sets to win every one of her matches in Berlin.

And given the high heat in which Saturday’s semifinal was played, it was all the more impressive that Bencic was able to pull it off.

But Bencic still seems to often catch people by surprise. She is now in her fifth career grass-court final. And, more pertinently as she faces Jabeur, she is 4-2 in her career against top-10 players on grass.

All of the previous editions of Jabeur vs Bencic have taken place on clay. And all have come in the last 14 months.

If there’s a pattern, it’s that the player to win the first set has won the match – but not before the opponent came back to take the second and send it to a decider.

Their earlier meeting in the Charleston ended with Bencic in tears of joy and Jabeur in … tears, period, after being denied in the final once again.

Jabeur has now made the final or better at 4 of her last 6 tournaments (also Charleston (R-UP), Madrid (W), Rome (R-UP). pic.twitter.com/kNn0czx1I9

But Jabeur, with rare exceptions, has begun to make a habit of getting to Sunday.

You’d expect her to hold up the big trophy, and become one of the top contenders in a wide-open field at Wimbledon.

Bencic will have other ideas, but perhaps not the energy to put them into practice.