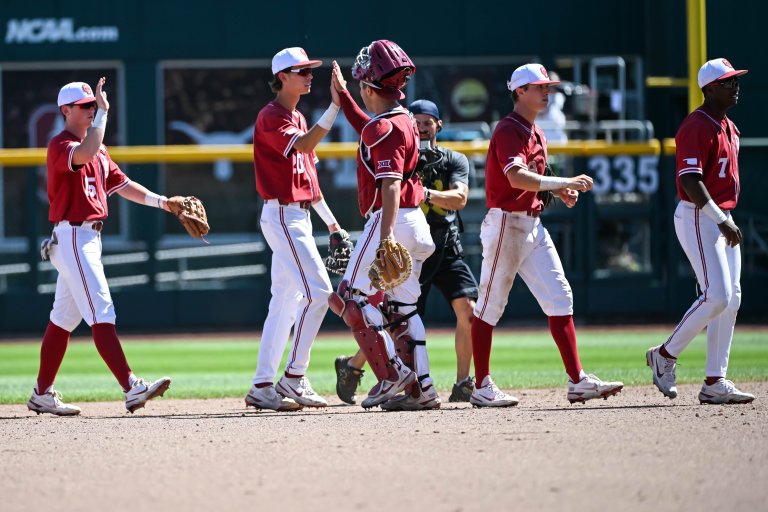 The Ole Miss vs Oklahoma odds favor the Sooners as -130 moneyline favorites in Game 1 of the College World Series Championship Final on Saturday (June 25th, 7pm ET)
Oklahoma is 3-0 in the CWS so far with a +13 run differential
Read below for the Ole Miss vs Oklahoma Game 1 odds, analysis and betting prediction

Ole Miss and Oklahoma will begin the best-of-three Championship Final at the College World Series on Saturday, in a matchup that few people expected.

At one point this season the Rebels were 7-14, and wound up being the last at-large team invited to the NCAA Tournament.

The Sooners meanwhile, are making their first appearance at the CWS in 12 years. They upset both Florida and Virginia Tech in the Regionals and Super Regionals, after sweeping the Big 12 Tournament.

Odds as of June 25th at DraftKings Sportsbook.

Oklahoma continued their incredible play once the CWS began, and they’ve looked the best team from the beginning. They’re the only club yet to lose, and boast a +13 run differential through three games.

Oddsmakers expect their run to continue as they opened as -130 moneyline favorites in Game 1 versus Ole Miss. First pitch is scheduled for 7pm ET at the Charles Schwab Field in Omaha, Nebraska with ESPN providing the broadcast coverage.

The Rebels, who rode some incredible pitching to the Championship Final, will have dig deep into their rotation for a Game 1 starter. Top-two starters Dylan DeLucia and Hunter Elliott won’t be ready until Games 2 and 3, meaning sophomore Jack Dougherty will get the ball.

Explaining to somebody how Ole Miss went from 7-14 in the league to the CWS finals!! pic.twitter.com/ecCJuigaB5

The right-hander hasn’t made a start since March, but has been phenomenal during the postseason. In 12 relief innings since the start of May he’s yet to allow an earned run.

Unlike Ole Miss, Oklahoma will be able to deploy its ace for Game 1. 6-6 southpaw Jake Bennett will toe the rubber for the Sooners, and OU has won each of his past seven starts. Bennett surrendered five hits and four runs over 6 innings in the CWS opener versus Texas A&M, while striking out three.

Because of David Sandlin, Oklahoma gets:

In his previous four postseason outings he allowed just five runs total, racking up a 29-to-6 strikeout-to-walk rate along the way.

The Rebels have not gotten this far thanks to their lineup. They’re 16-4 since May 1st and 8-1 in the NCAA Tournament. Over the last nine games they’ve allowed just 2.2 runs per contest, which has helped mask the fact that their bats have gone cold.

Ole Miss scored just four runs total over its last two games. In four of the last five outings, they’ve crossed the plate five times or less. They’re batting .282 in the postseason, but managed just 15 hits total in their past two games versus Arkansas.

Oklahoma on the other hand, has been raking all Tournament. They’ve averaged eight runs per game while batting .303 with a .404 OBP and .517 slugging percentage.

“We wanna prove people wrong and make a statement. We were able to do that in regionals and super regionals and we’re doing it now.” – #Sooners Tanner Treadway

Tanner Treadway is leading the charge with a .488 average in the postseason, which included three home runs, seven extra-base hits and 10 RBI. Not to be outdone, both Peyton Graham and Jimmy Crooks are batting .372 during the Tournament, with Crooks also posting a .744 slugging percentage.

Despite his strong postseason, a matchup versus Dougherty is the most favorable one the Sooners will get in the Championship Final and they’ll need to take advantage of it. The way they’re swinging the bats, Dougherty will be hard pressed to keep his phenomenal run in tact.

On the other side, the Ole Miss lineup is loaded with left-handed bats which sets up perfectly for OU’s left-hander Bennett. The Rebels lineup struggled versus Arkansas’ southpaws in the previous two games scoring just four times, and Bennett should be able to give them similar problems.

Six of the last seven CWS Championship Finals have gone three games. This matchup profiles as one that will go the distance as well, with Oklahoma continuing its unbeaten run in Game 1.