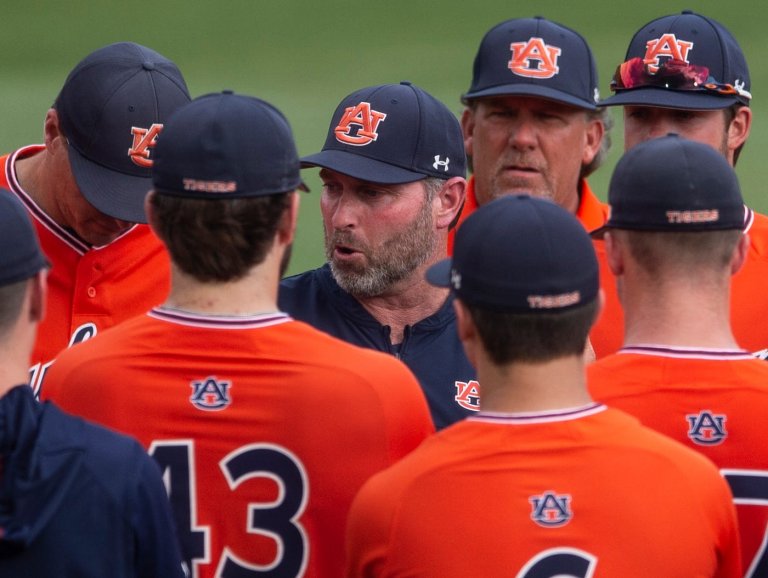 The Ole Miss Rebels are -128 favorites over the Auburn Tigers in College World Series action in Omaha on Saturday, June 18
The Tigers and Rebels are among four SEC teams to reach the final stages of the CWS
All of the Ole Miss vs Auburn picks, odds. predictions and best bets are analyzed in the story below

When the NCAA baseball season got underway, the Auburn Tigers (42-20) and Ole Miss Rebels (37-22) weren’t expected to find themselves ending up the campaign anywhere near the College World Series.

Auburn was projected to finish seventh overall, last in their SEC division, in most preseason projections. Ole Miss battled through to the final stages of the CWS despite being an unseeded team.

Auburn, ranked #14, is making its sixth CWS appearance and second in the past three tournaments. But it’s Ole Miss that oddsmakers like as the -128 favorites in this game.

The first pitch in Omaha is set for 7pm ET. ESPN is providing the broadcast.

Sophomore right-hander Joseph Gonzalez will be taking the mound for the Tigers. He’s 7-3 with a 2.95 ERA this season. He’s leading the Tigers in wins, ERA, innings pitched (73.1) and strikeouts (47). Auburn has lost four of the past five games he’s pitched. Gonzalez is 1-3 over his past four decisions.

The Rebels are countering with junior right-hander Dylan DeLucia. His record is 6-2 with a 4.35 ERA. He’s leading the team in wins, innings pitched (78.2) and is second on the club in strikeouts with 88. The Ole Miss pitching staff shows a 4.44 ERA with 618 strikeouts in 510.1 innings of work.

Rebels Get Hot At The Right Time

Ole Miss finished the regular season with a 8-2 straight up mark over the past 10 games. The Rebels are 5-0 in NCAA Tournament play and have outscored the opposition 46-11.

Offensively, the Rebels are hitting .279. Leading the way is Kevin Graham, who’s batting .331 clip. Tim Elko, who missed a month following an ACL tear, has clouted 22 home runs and driven in 71 runs. He crushed a pair of grand slams in the NCAA Regionals.

Rebel pitchers gave up only seven hits in two super-regional games against Southern Mississippi. The bullpen has not allowed an earned run in 17.1 postseason innings.

Tigers Doing It In Different Ways

In the NCAA Regionals, Auburn got the job done with the bats. The Tigers clubbed 11 home runs and outscored UCLA and Florida State 51-18 in a three-game span. That’s the most runs ever scored by an SEC team in an NCAA Regional.

Samford transfer and SEC Player of the Year Sammy DiChiara is leading the nation in on-base percentage at .560. Batting .392, DiChiara is one home run shy of matching the Tigers record of 23 set by fellow SEC Player of the Year Hunter Morris in 2010. Junior infielder Blake Rambusch is second on the team in batting average (.336) and leading the team with 16 stolen bases.

Facing #3 seed Oregon State in the NCAA Super Regional, Auburn scored just 14 runs over the course of three games. Pitching got the job done as the Tigers won 2-1, taking two-run (7-5) and one-run (4-3) victories, while dropping a 4-3 decision in the other game. Closer Blake Burkhalter’s 15 saves rank him second in the nation.

Auburn batted just .209 with 11 runs in the last four regular-season games. In the tournament, the Tigers are hitting .303 with 67 hits and 65 runs over four games.

The best bet in this game might be the over. During a three-game regular-season meeting, Ole Miss won two of three games. But the average runs per game was 20.

The hay is in the barn.

The Tigers are looking to be a team with the necessary balance of hitting and pitching to go all the way in the CWS. And both elements are coming together right now.