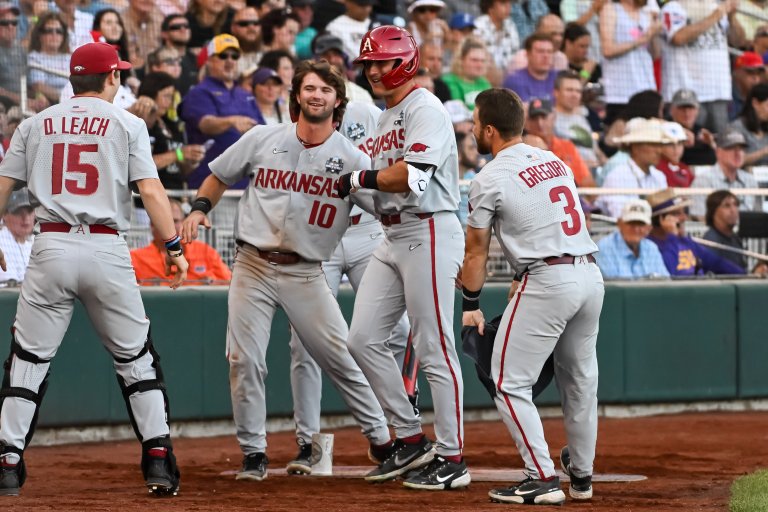 The Arkansas Razorbacks are -120 favorites over the Ole Miss Rebels in their College World Series semifinal game in Omaha on Wednesday, June 22
Already, the unbeaten Rebels own a 13-5 verdict over the Razorbacks in the tournament
All of the Ole Miss vs Arkanas odds, picks, predictions and best bets follow in the story below

The Arkansas Razorbacks (44-20) don’t require any scouting reports to be aware of the capabilities of the Ole Miss Rebels (38-22). It remains fresh in their minds,

On Monday, the Rebels went hog wild and pounded the Razorbacks 13-5 in College World Series action. Ole Miss is a perfect 5-0 in CWS play. They’re the only school that remains unbeaten.

Arkansas will need to bring a halt to the perfection of the Rebels when the two clash in the CWS semifinals. Oddsmakers, though, are sticking with the form charts. The Razorbacks are set as -120 favorites.

The first pitch at Charles Schwab Field in Omaha is set for 7:00 pm ET on Wednesday, June 22. ESPN is providing the broadcast.

In the CWS betting trends, Ole Miss is currently the chalk in the CWS odds at +130. Arkansas is the third betting choice, showing odds of +500.

Junior right-hander Derek Diamond figures to get the ball for Ole Miss. He’s 16-14 with a 6.89 ERA this season.

With tonight’s 11-1 win over Auburn, the 45th win of the season, @RazorbackBSB is the only team in the nation with at least 45 wins in each of the last five completed seasons. pic.twitter.com/6L8yft5XXW

Senior right-hander Connor Noland is expected to be the starter for the Razorbacks. He’s 8-5 with a 3.75 ERA.

Arkansas put a top to bottom beatdown on Auburn by an 11-1 count. Five of the first six hitters in the Razorbacks batting order collected multiple hits.

Freshman first baseman Peyton Stovall was 5-for-6 with a double, two runs and three RBI. Catcher Michael Turner was 3-for-4 and right fielder Chris Lanzilli was 3-for-5 with a home run. Both Lanzilli and Turner drove in three runs. Stovall’s five hits were a CWS record for a freshman.

On the mound, redshirt sophomore Will McEntire carried a no hitter into the fourth inning. He worked seven innings of three-hit, one-run ball for the win, striking out nine Auburn batters.

In their 13-5 rout of Arkansas, Ole Miss held a Razorbacks team that scored 17 runs against Stanford to just six hits over the first eight innings of the game.

Ole Miss is 2-0 in the CWS for the first time since 1956. The Rebels owned five all-time CWS wins prior to this year.

Over? Did someone say over?

As a matter of fact, yes. Consider that Arkansas beat Stanford 17-1 before the Razorbacks games with Ole Miss and Auburn. The winner in the three Arkansas games alone has accounted for 41 runs over three games. How could anyone not bet the over in this contest?

Last night was fun.
Let’s do it again? pic.twitter.com/ffY7vnku8x

As for the game, who wants to bet against perfection? Ole Miss hasn’t missed a beat. The Rebels aren’t likely to be taking a beating.