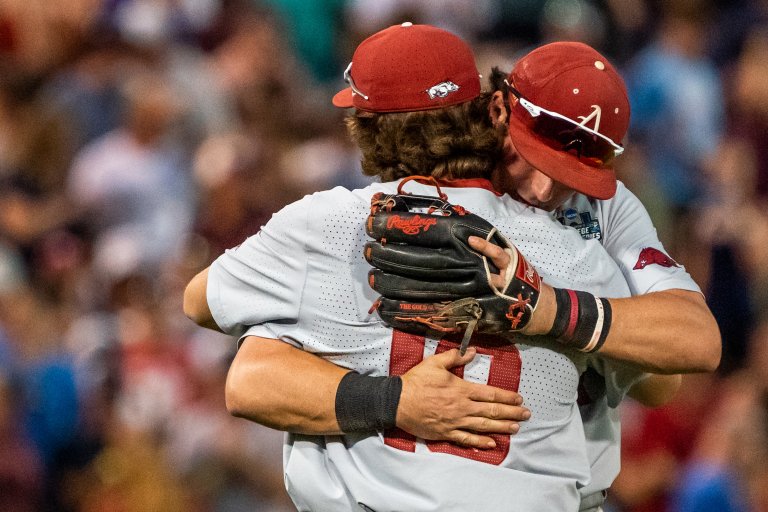 The Arkansas Razorbacks are -132 favorites over the Ole Miss Rebels in the second game of their College World Series semifinal in Omaha on Thursday, June 23
Winner of this game will face the Oklahoma Sooners in the best-of-three CWS final
All of the Arkansas vs Ole Miss odds and picks are assessed in the following story

The Arkansas Razorbacks (46-20) knocked the Ole Miss Rebels (39-23) from the ranks of the unbeaten in the College World Series. Now they’re looking to knock the Rebels right out of the CWS.

Arkansas hung on for a 3-2 victory over Ole Miss on Wednesday in their CWS semifinal. Since the Rebels entered that game unbeaten, the Razorbacks must beat them twice in order to advance to the final in the double elimination tournament. The winner of Thursday’s rematch between the two schools will face the Oklahoma Sooners in the best-of-three CWS final.

Oddsmakers are favoring Arkansas to double down on Ole Miss. The Razorbacks are set as the -132 chalk in the second game of their semifinal. Action on the Rebels comes with a betting line of +100.

The first pitch at Charles Schwab Field in Omaha is set for 4:00 pm ET on Thursday, June 23. ESPN is providing the broadcast.

In the CWS betting trends, Ole Miss and Arkansas are currently showing as the co-second betting choices in the CWS odds at +240.

With their season on the line, both school are going to be sending the ace of their staffs to the bump.

Senior right-hander Connor Noland is going to be the starter for the Razorbacks. He’s 8-5 with a 3.75 ERA. Noland has struck out 106 in 108 innings this season. He has won his last three starts, including a 17-2 verdict over Stanford in the Razorbacks’ opener in Omaha.

Ole Miss will be countering with junior right-hander Dylan DeLucia. He shows a 7-2 record with a 4.07 ERA this season. The Rebels have won DeLucia’s last three starts and he’s got the decision in two of those victories. He was the pitcher of record as Ole Miss downed Auburn 5-1 in Omaha. DeLucia has fanned 98 batters in 86.1 innings.

Zack Morris took the loss for Arkansas in the 13-5 loss to Ole Miss in the first meeting of the two schools at the CWS. Wednesday, Morris came in and pitched out of a bases-loaded, no outs jam in the bottom of the ninth for the save as the Razorbacks beat the Rebels 3-2.

Brady Slavens and Chris Lanzilli homered for Arkansas. It was third home run of the CWS for Lanzilli. He’s the first to go deep three times in Omaha since Michigan’s Jimmy Kerr in 2009.

A 3-2 victory certainly wasn’t what the form charts were suggesting would happen when Arkansas and Ole Miss took to the diamond on Wednesday. In their previous game at the CWS, Ole miss smacked Auburn 13-15.

Coming into Wednesday’s loss, the Rebels were 7-0 in tournament play, outscoring opponents 64-15. Ole Miss was showing a 77-40 edge in hits and a 29-15 advantage in extra-base hits. In Omaha, Ole Miss has outscored opponents 20-9.

In Arkansas’ other two CWS games, they clobbered Stanford 17-2 and whipped Auburn 11-1. The Razorbacks have scored 36 runs in four games at Omaha.

Arkansas took two of three from Ole Miss in SEC regular-season play. Factor in the two meetings in Omaha and they’ve gone hog wild over the Rebels in three of five games this season.

However, in the Rebels’ regular-season victory over the Razorbacks, DeLucia got the win and Noland was tagged for the loss as Ole Miss triumphed 4-2 on April 29.