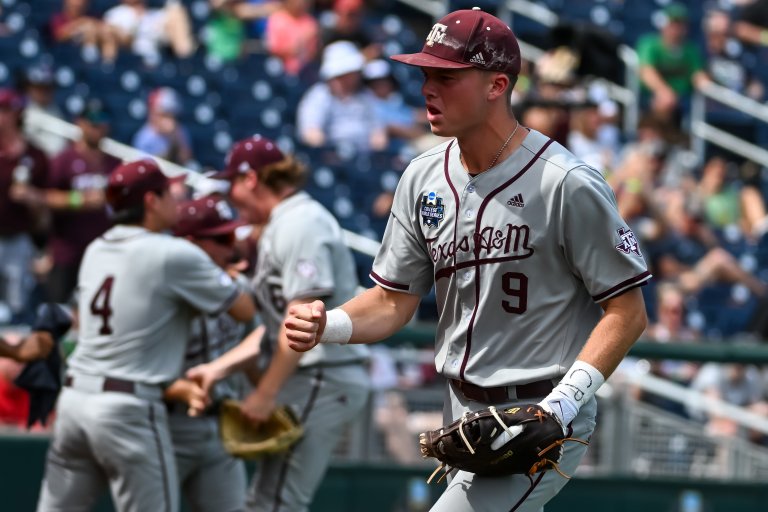 The stakes are sky high on Wednesday at the College World Series. Oklahoma (2-0) and Texas A&M (2-1) will square off for the second time in less than a week, after the Sooners handed the Aggies a 13-8 defeat back on Friday.

Since then, A&M has staved off elimination twice. They pounded Texas 10-2 on Sunday and beat up Notre Dame 5-1 on Tuesday to earn a rematch with OU.

Oklahoma meanwhile, also took down the Fighting Irish on Sunday, and can advance to the championship round with a victory over the Aggies.

Should A&M emerge victorious than the two will play a one-game showdown on Thursday for a spot in the final. Oddsmakers however, don’t expect that to be the case.

The Sooners opened up as -125 moneyline favorites, in a contest that features a total of 14.5. First pitch is scheduled for 2 pm ET at the Charles Schwab Field in Omaha, Nebraska with ESPN providing the broadcast coverage.

OU will give the ball to redshirt sophomore David Sandlin on Wednesday. The 6-4 righty pitched a third of an inning in relief versus A&M last week and it did not go well. The Aggies roughed him up for four runs and two hits, and it marked the second consecutive outing where he’s been hit hard.

In his previous start in the Super Regional Round, Sandlin coughed up six hits and five runs over 3.2 innings to Virginia Tech. Prior to that outing he had been sharp, allowing three runs or less in three straight starts, while striking out 23.

A&M has yet to name its starter, but Ryan Prager or Wyatt Tucker are likely candidates. Both number one Nathan Dettmer, who pitched six scoreless innings versus Notre Dame, and number two Micah Dallas have both started over the last three days.

Prager and Tucker on the other hand, are fresh. They both saw action last versus the Sooners on Friday, with Prager facing only two batters and Tucker logging 3 innings of scoreless ball.

No matter who’s on the mound for the Aggies, they’re going to have their hands full with the OU bats. The team has scored 38 runs in their last four games, and is batting .313 with runners in scoring position through two games at the College World Series.

Peyton Graham was the catalyst against Notre Dame, becoming the first player since Barry Bonds in 1984 to record four hits and two steals in a CWS game. Tanner Tredaway meanwhile, continued his torrid postseason.

Tredaway went 3-for-4 with 2 RBI, raising his NCAA Tournament batting average to .381. He’s riding a 16-game hitting streak, and has nine multi-hit outings in his past 13 contests.

Not to be outdone, A&M has been mashing all postseason long. They pounded 10 hits and scored five runs against the Fighting Irish, and have now outscored their opposition 15-1 over the past 15 innings.

Sophomore Trevor Werner smacked his seventh home run of the season, while Dylan Rock drove in a pair of runs. Austin Bolt, who entered the game as one of three Aggies hitting north of .345 during the NCAA Tournament picked up two more hits, while Jack Moss improved his postseason average to .381 with a double.

Each of the last two times that OU has started 2-0 in the CWS they’ve gone on to win the National Championship. While they still might get a chance to play for the title, I’m willing to bet they’ll have to wait at least one more game.

A&M has been feasting on enemy pitchers and they’ve already roughed up Sandlin once in the last six days. It’s not ideal that they can’t run out one of their top-two starters, but the bullpen has been a revelation in the past two games. Aggie relievers have combined to throw 6 innings in their last two contests, yielding just a single run and three hits.