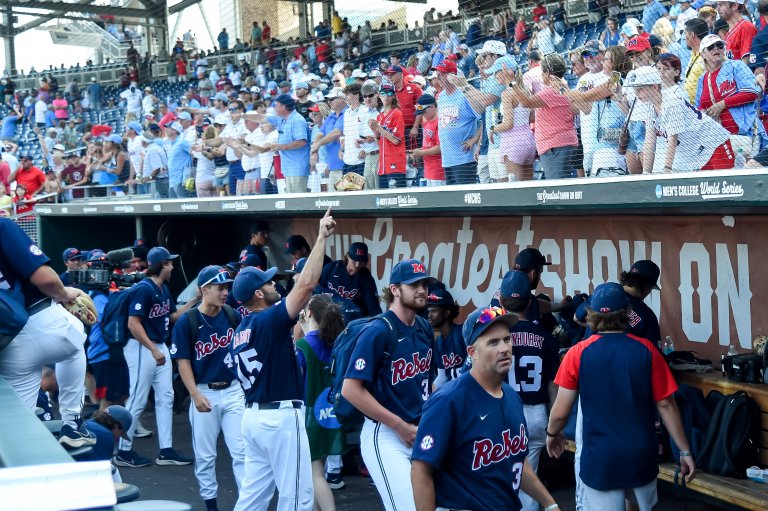 Oddsmakers are setting the College World Series final as a pick’em
Both the Oklahoma Sooners and Ole Miss Rebels are listed at odds of -115
All of the CWS final odds, picks, predictions and best bets are analyzed in the following story

Sports is filled with David vs Goliath tales but in the College World Series final, each of the Oklahoma Sooners (45-22) and Ole Miss Rebels (40-23) are firm in their beliefs that they are filling the role of the underdog David.

Even oddsmakers are stumped when it comes to assessing which school is Goliath and which one will be viewed as giant killers should they win it all. They’re setting the CWS final as a pick’em. Both the Sooners and Rebels are assigned odds to win the championship of -115.

Game 1 of the best-of-three series at Charles Schwab Field in Omaha is set for Saturday, June 25 at 7:00pm ET. Game 2 will follow on Sunday, June 26 with a 3:00pm ET first pitch. If Game 3 should prove necessary, the action will begin at 7:00pm ET on Monday, June 27. All of the games will be broadcast by ESPN.

At odds of -115, a wager on either the Sooners or Rebels would bring with it an implied probability of victory of 53.49%. A winning $10 wager on Oklahoma or Ole Miss will deliver a payout of $18.70.

Early in the NCAA baseball season, the Rebels found themselves atop the top-25 rankings. Prosperity, though, was short-lived.

A 7-14 SEC record sent Ole Miss tumbling right out of the top 25. In the opening game of the SEC Tournament, Vanderbilt left the Rebels without a cause, beating Ole Miss 3-1.

When the NCAA Tournament selections were being announced, some members of the Rebels readily admit they didn’t even watch, so assured were they that they wouldn’t be a part of the College World Series picture.

As it turned out, Ole Miss was one of the last four included in the 64-school field. And just like that, the Rebels ignited. They went 8-1 and battled their way to one of the eight CWS slots in Omaha.

Friday, in a win-or-go-home showdown with SEC rivals Arkansas, Dylan DeLucia tossed a complete-game, four-hit shutout for a 2-0 victory over the Razorbacks. DeLucia epitomizes the Ole Miss never say die spirit. He wasn’t even part of the starting rotation until midseason.

Sooners Also Suffered Along the Way

Oklahoma was also scuffling at the outset of the NCAA baseball campaign. The Sooners lost two of their first three Big 12 series. They were 18-12 at the 30-game mark of the season.

Oklahoma has gone 27-10 since and 12-2 in postseason play, including a perfect 3-0 slate in Omaha. They’ve won easily at the CWS. Oklahoma sandwiched 13-8 and 5-1 wins over Texas A&M around a 6-2 drubbing of Notre Dame. The Sooners have yet to trail in a CWS game.

The Sooners are seeking to turn a diamond double. Oklahoma has already won the Women’s College World Series softball title.

Alabama had Joe Namath and Ole Miss has Tyler Elko. Like Namath, Elko is the star of the team. And like Namath did for the underdog New York Jets at the 1969 Super Bowl, Ole Miss first baseman and team captain Elko is guaranteeing victory. He stated if the Rebels got to the CWS, they would be winning the national championship.

Oklahoma is holding the pedigree in this matchup. The Sooners were CWS champions in 1951 and 1994. This is the first CWS final appearance in school history for Ole Miss.

The Sooners are a relentless team on the attack. They’re grinding out every at-bat and all of their hitters are tough outs. And their pitchers are well-rested for a potential three game series. Oklahoma hasn’t played since Wednesday.