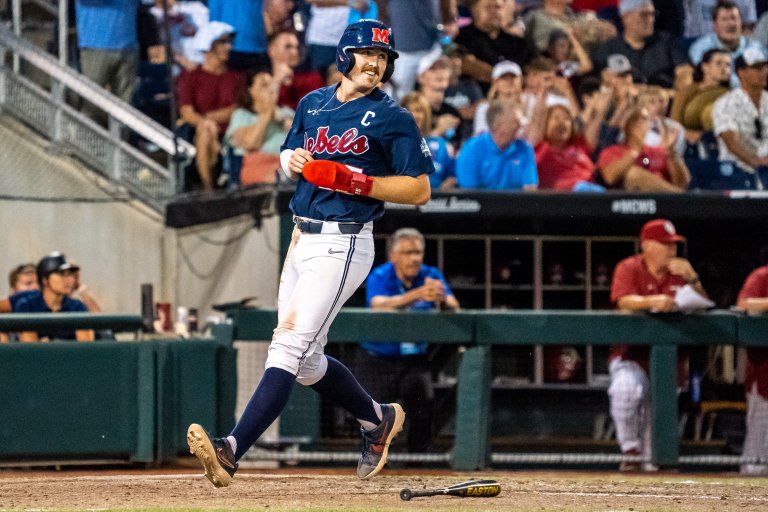 The Ole Miss Rebels are -135 favorites over the Oklahoma Sooners in Game 2 of the College World Series final on Sunday, June 26
Each of the last three CWS finals have gone the full three games
All of the Oklahoma vs Ole Miss odds, picks, predictions and best bets are analyzed in the story below

Much to the chagrin of the Oklahoma Sooners, Cinderella’s baseball spikes are still fitting comfortably for the Ole Miss Rebels.

In Saturday’s College World Series final opener, the Rebels manhandled the favored Sooners 10-3. Ole Miss can wrap up the best-of-three series and win the first NCAA baseball national title in school history with a victory in Game 2 on Sunday.

Oddsmakers are liking the chances of that happening. Ole Miss is set as -135 favorites to win Game 2. The Game 1 winner has captured just one of the past three CWS titles, however.

First pitch for Game 2 of the CWS at Charles Schwab Field in Omaha is set for 3pm ET on Sunday, June 26. ESPN will be broadcasting all of the action.

In the CWS betting trends, Ole Miss is the -550 favorite to win the title in the CWS odds. Oklahoma is given a betting line of +400 to win it all.

Starting pitching for the rest of the series is setting up quite nicely for the Rebels. Ole Miss is sending #2 starter Hunter Elliott (5-3) to the hill for Game 2. The freshman left-hander is unbeaten (2-0) in the postseason.

They can follow with staff ace Dylan DeLucia if Game 3 is necessary. DeLucia has allowed one run in 16.2 CWS innings.

and now this IN OMAHA: https://t.co/TmV8UbpJZA

Playing in their first-ever CWS final, Ole Miss was a big hit. Clubbing 16 hits, the Rebels wound up garnering the most base knocks by a team in a CWS final game since 2008.

Ole Miss slugged four home runs. Captain Tyler Elko, backing up his guarantee that Ole Miss would win the national title, started the party with a solo shot to lead off the fourth inning. It was his 24th homer of the season.

Punctuating the Rebels’ triumph were back-to-back-to-back jacks in the eighth inning. TJ McCants, Calvin Harris and Justin Bench all went deep in successive at-bats. That hadn’t happened since 1998.

Elko went 4-for-5. No batter in the CWS final had collected four hits in a game since 2009.

Winning pitcher Jack Dougherty came into the game with a 5.00 ERA. The sophomore right-hander carried a perfect game into the sixth inning.

Oklahoma was a perfect 3-0 in Omaha coming into Saturday’s game. The Sooners sent staff ace Jake Bennett to the bump on five days’ rest.

On paper, it seemed like a mismatch. In reality, it was – only not in the manner most saw it playing out.

Speaking of CWS betting trends, the elephants are all in on the cause of the Rebels.

NCAA.com asked the handlers at Omaha’s Henry Doorly Zoo and Aquarium to set up a predictive play on the CWS final with their elephants.

Filling six papier-mache baseballs was alfalfa and other tasty elephant delicacies. Four of the giant baseballs were featuring the 2022 MCWS logo. Adorning one ball each was a logo from the competing schools. Whichever of those two balls was devoured first would be determined as the CWS winner.

When the elephants were done dining it was Ole Miss that was projected as the CWS champion. How much weight should be given to this predictive model is entirely up to the bettor.

Everything is pointing in the favor of Ole Miss in Game 2 of the CWS. But everything was supposed to be working for Oklahoma in Game 1 and how did that turn out for the Sooners?

Ole Miss is 1 win away from a National Championship!

If there’s one lesson to be taken from the 2022 CWS, it’s that the form charts aren’t worth the paper on which they are printed. As well, each of the last three CWS finals have gone three games.

Play that likelihood. Take the Sooners and the value.