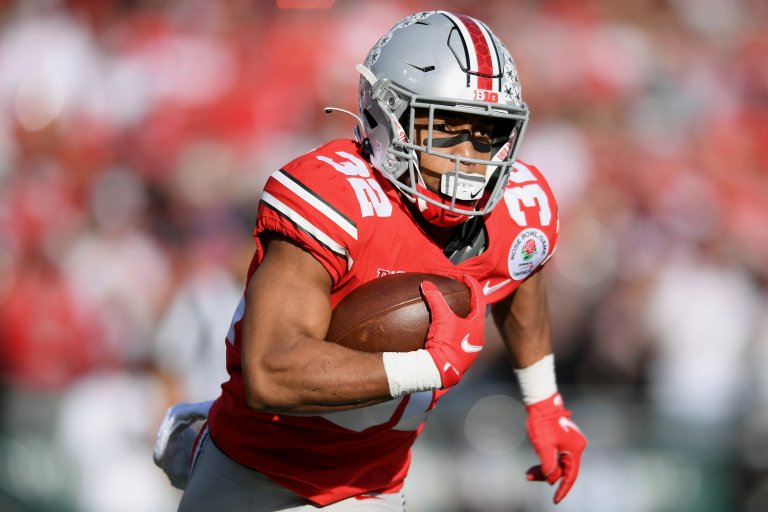 The 2022 Heisman odds suggest a player on Ohio State is likely to take home college football’s most prestigious award this season. Buckeyes’ QB CJ Stroud, RB TreVeyon Henderson and WR Jaxon Smith-Njigba are all top-10 favorites for the trophy.

This scenario is reminiscent of 2020, when Alabama QB Mac Jones, RB Najee Harris and WR DeVonta Smith all finished top-4 in the Heisman voting. Jones and Harris were favored most of the season, but Smith took home the award as a massive preseason longshot.

Which Ohio State star is the best Heisman bet? Or will they cancel each other out, with a Columbus outsider winning the coveted hardware?

Odds as of July 28th at Barstool Sportsbook.

Not only is Ohio State dominating the Heisman odds, but they also have the second-best National Championship odds. The Buckeyes finished 2021 with an 11-2 record after beating Utah 48-45 in the Rose Bowl.

CJ Stroud is the new favorite in the Heisman odds as expectations continue to grow for the signal caller heading into his sophomore season. The last time Stroud took the field,  he passed for a school-record 573 yards and a record-tying six touchdowns against the Utes, with both totals setting new Granddaddy marks.

Alabama is expected to be the preseason No. 1 and Bryce Young ran away with the award last year, breaking single-season program records. But for that reason alone, you can almost eliminate the soon-to-be junior signal-caller in Tuscaloosa. Only one player has ever repeated (ironically, former Buckeye running back Archie Griffin in the mid-70s).

Young’s blindside protector, Evan Neal is on the Giants now, while the Bucks return three starting offensive linemen. Stroud has a Heisman-sized chip on his shoulder after finishing fourth in balloting last year. Heisman voters love a good narrative — and Ohio State has all the ingredients.

Smith-Njigba Could Be Sneaky Play

Without Garrett Wilson and Chris Olave stealing targets, it’s not unreasonable to think Smith-Njigba might surpass his 1,606 receiving yards and nine touchdowns from last season. Plus, his team-first mindset — over individual honors — shows he’s in the right headspace.

Jaxon Smith-Njigba on his personal goals for the 2022 season: “I’m focused on winning a national championship. That’s my main focus. … Whatever comes with that comes with that.”

Smith-Njigba showed his Heisman potential in the Rose Bowl when he set an FBS bowl game record with 347 yards receiving while catching a school-record 15 passes and adding three TDs. A $10 wager on Smith-Njigba in the Heisman odds right now would payout $260 if he wins.

But here’s the catch (no pun intended). Smith — who became the first receiver to win the award two years ago since Desmond Howard won in 1991 — had 23 trips to paydirt! There’s a reason why so few wideouts win this award. While Smith-Njigba is an incredible talent, it’s hard to realistically see him winning the Heisman.

As a freshman last year, Henderson went for 1,560 total yards and 19 total TDs. Considering the coaching changes and scheme adjustments OSU head coach Ryan Day has made since we last saw this group, Henderson appears to be set up to have another monster season. But this time, it could be truly special.

He’s the kind of back that can do it all — get the tough yards, break the big one and catch passes. With defenses likely focusing on slowing down Stroud and his robust receiving corps, Henderson appears to be on the verge of a true breakout in 2022.

TreVeyon Henderson is the best RB in the country. He gets overlooked next to the legendary CJ Stroud at QB. Henderson will show the world what he’s all about this season. He’ll eclipse 2,000 rushing yards, 500 receiving yards, and 20 touchdowns. Don’t sleep. Don’t sleep. 🐐🔥

Stroud is rightfully the favorite in the Heisman odds. The Buckeyes have consistently contended for the national championship for the better part of the last two decades, but haven’t had a winner since quarterback Troy Smith won in 2006.

As we saw two years ago, when one program has this much top-end talent, one of the players wins. I don’t see an outlier taking the Heisman away from this Ohio State trio — but Henderson may end up being the winner.