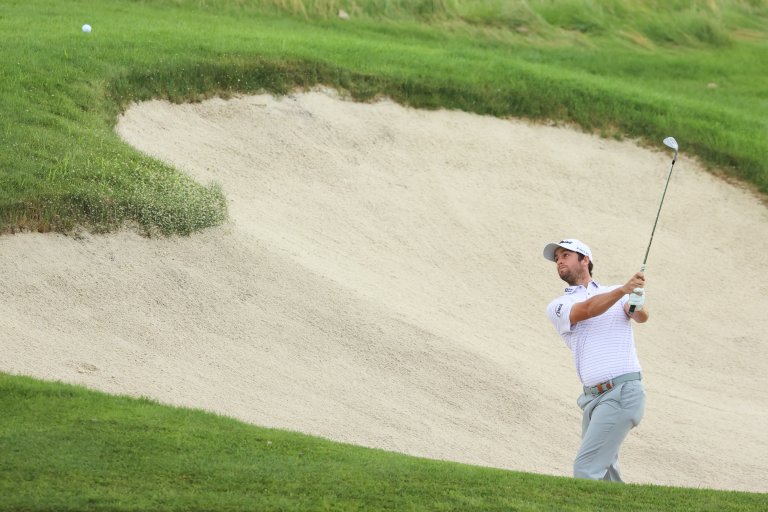 Jul 22, 2022; Blaine, Minnesota, USA; Davis Riley hits from a bunker on the 12th hole during the second round of the 3M Open golf tournament. Mandatory Credit: Matt Krohn-USA TODAY Sports

We may have whiffed on our Cameron Champ prediction to miss the cut last week in Detroit, but our Make the Cut Parlay more than made up for it. The six-leg parlay was a sweat-free winner, paying out +990 odds.

This week we’ll look to run it back at the Wyndham Championship, at a course that demands elite irons and a hot putter. We’ll get to our parlay a little later on, but first we’ve identified a prime candidate to trunk slam based on ice cold approach play and a middling short game.

Odds to Make and Miss Cut at Wyndham Championship

Odds as of August 2nd at DraftKings Sportsbook

That of course is Davis Riley, who after a red-hot spring, has been ice cold this summer.

Riley’s last three results have been MC, MC and 64th. He’s failed to gain more than 0.2 strokes with his irons in any of those starts, and is fresh off losing 3.3 strokes on approach last week at the Rocket Mortgage Classic.

Davis Riley went from a 96% chance to make the cut with 5 holes left to 10% with 4 holes left (and it was from 90 yards in the middle of the fairway) pic.twitter.com/h0P4QXDwps

In addition to poor iron play, his putting has been abysmal. He’s lost a total of 9.4 strokes on the greens over his past three starts, and ranks 91st in this field in that category over the past 24 rounds.

As mentioned, elite irons are essential for success this week, but specifically short irons and wedges. That hasn’t been Riley’s strong suit lately, as he ranks 121st in proximity from 100-125 yards out, and 52nd from 125-150 yards out over the past 24 rounds.

He’s never played Sedgefield Country Club competitively before which also doesn’t bode well. It’s one of the tracks on Tour where course history has been proven to be most predictive. Just another reason to fade him this week.

Speaking of course history, Harold Varner III has made five straight cuts at the Wyndham Championship, and the local kid is the anchor for our Make the Cut Parlay. As headlined in our sleepers and longshots article, HV3 ranks fourth in strokes gained approach and third in iron shots within 15 feet (opportunities gained) over the past 50 rounds.

Thanks to @DataGolf, you can see Harold has only lost strokes approaching the green THREE tournaments in the last year ??

Next, let’s pair him with Si Woo Kim who’s on record saying Sedgefield CC is his favorite course on Tour. The numbers back that up as he has results of T2, T3 and 5th in his past three Wyndham Championship starts.

Sticking with course history studs, we can’t overlook Webb Simpson. He named his daughter after this event (Wyndham), has 12 straight made cuts here, and has finished inside the top-10 nine times.

Webb Simpson for a share of the lead!
pic.twitter.com/paeXcTPSMD

We’ll keep it going with Justin Rose who finished 10th last year, and Scott Stallings who ranks fourth in strokes gained approach over the past 24 rounds, and inside the top-11 in proximity from 125-150 yards outs.

We’ll round it out with Alex Smalley, who’s a member at Sedgefield CC. The PGA Tour rookie has three top-20 results in his past five starts, gaining over four strokes on approach in each high end finish.

Add it all up and we’re looking at a +796 payout if all six golfers can get through the cut line.