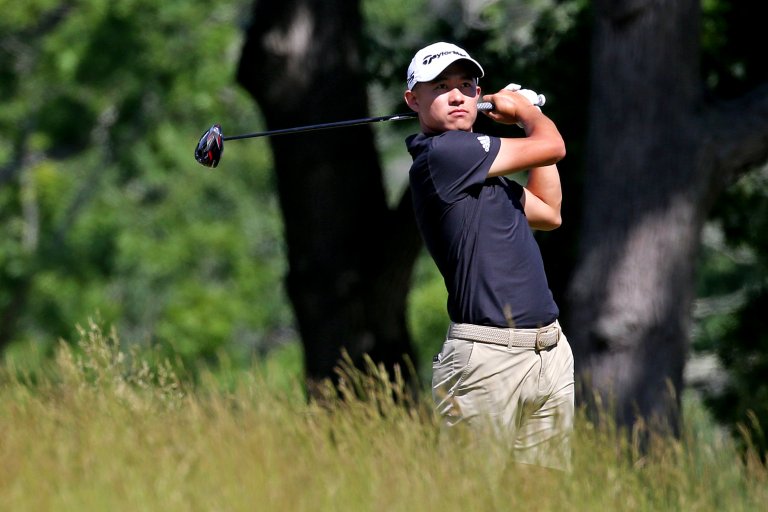 Jun 14, 2022; Brookline, Massachusetts, USA; Collin Morikawa plays his shot from the fourth tee during a practice round of the U.S. Open golf tournament at The Country Club. Mandatory Credit: Peter Casey-USA TODAY Sports

Golf’s third Major is less than 24 hours away from teeing off, and this year’s U.S. Open will present a unique challenge. Unlike most National Championships, length will not be the primary defense of this year’s U.S. Open course. The Country Club in Brookline, Mass, is relatively short by Major Tournament standards, but is littered with trouble.

Hazards are everywhere on this course, while bunkers, water and long rough surround some of the smallest greens players will see all season. Speaking of rough, the thick stuff at The Country Club will swallow your golf ball whole, and it’s likely to be a popular spot as these fairways are extremely narrow.

The U.S. Open is routinely one of the most difficult and volatile challenges of the season, and always produces plenty of surprise trunk slammers on Friday. This year will be no exception, and we should expect a handful of the top contenders in the U.S. Open odds to be watching the festivities from their couches this weekend.

Odds as of June 14th at DraftKings Sportsbook.

We’ve scanned the odds board looking for the most likely candidates to miss the cut, and have narrowed our choices down to two players.

Morikawa is Off the Mark

As a huge Collin Morikawa fan, it pains me to witness the current state of his game. The two-time Major champ has missed two of his past seven cuts, and has just two results inside the top-40 since the end of February.

News out of the Brookline this week suggests that Morikawa has now abandoned his bread butter shot, the baby cut, but not by choice.

Colin Morikawa is known for having the most reliable baby cut on earth.

Right now he’s playing a draw. Not because he wants to, but because it’s just the way the ball is flying. He and his coach can’t quite figure it out. pic.twitter.com/wa9QTljqnS

His ball flight is all of a sudden moving from right to left and he’s unsure why. Morikawa is known as one of the purest ball strikers on the planet, but if he doesn’t know what’s happening with his swing that should sent alarm bells ringing among bettors.

Another reason to fade Morikawa is that his short game is his biggest weakness and that aspect will be put to the test this week. As mentioned, the greens are incredibly small placing a premium on around the green play and putting. Over the past 24 rounds, he ranks 115th and 102nd respectively in those two categories.

Our next fade is former U.S. Open champ Dustin Johnson. One of golf’s new black sheep, Johnson’s form has been trending down for a while now. He broke par in just one of three rounds at the LIV Golf Series’ first event last week, and missed three of his final seven cuts before leaving the PGA Tour.

Dustin Johnson has announced his resignation from the PGA Tour. He plans to play only LIV golf events and majors.

He’s now ineligible to play in the Ryder and Presidents Cups. pic.twitter.com/7WI0ITbPEk

Like Morikawa, his short game has been his Achilles’ Heel as the ranks 80th in strokes gained around the green over the past 24 rounds, and 94th in putting.

That’s enough doom and gloom for one story, now let’s focus on who will still be playing on the weekend. Shane Lowry was featured in our U.S. Open sleepers and longshots article and is a great anchor for our make the cut parlay given his form and track record at Majors.

Lowry has six top-13 results in his past eight starts overall, and has finished inside in the top-10 in two career U.S. Opens, while making 12 consecutive cuts at Major Championships.

Next, let’s add Jordan Spieth to our parlay. The 2015 champ is a short game wizard and leads the field in both strokes gained tee-to-green and around the green over the past 24 rounds.

There will be a handful of blind shots the players will face at The Country Club this week. pic.twitter.com/5xMB1GjRiO

Tony Finau is the next name to add, as he’s placed second or better in three of his past five events, and has made 17 of his past 19 cuts at Majors.

Max Homa is the fourth leg of our parlay, as he’s made 10 straight cuts, and is one of the few players on Tour who’s won four times in the past three years.

Our fifth leg will be Daniel Berger, fresh off a fifth place finish at the Memorial where he gained 5.4 strokes on approach and 6.6 strokes putting. We’ll finish it off with Corey Conners, who’s been dynamite at Majors. The Canadian has five top-17 results in Majors since 2020, including three top-10’s.

Add it up and we’re looking at a +685 payday if all six golfers get through to the weekend.