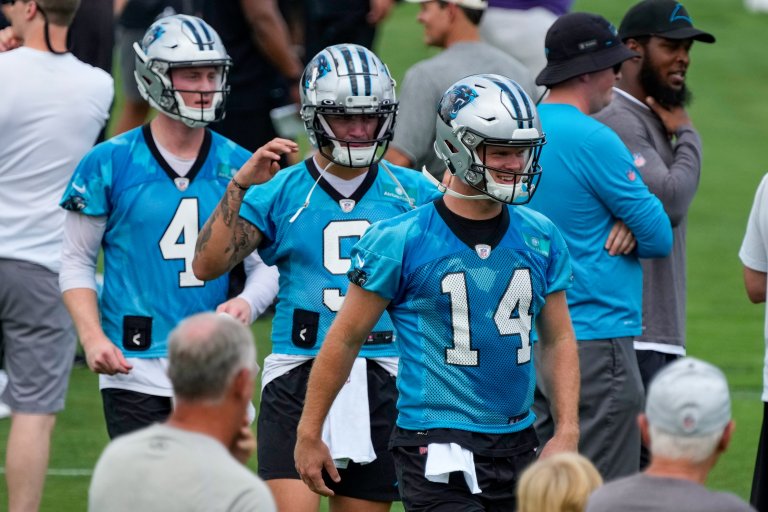 Sam Darnold is the -250 odds-on favorite to maintain his status as the starting quarterback for the NFL’s Carolina Panthers
Carolina has been openly shopping for a QB during the offseason and drafted Matt Corral of Ole Miss
All of the Panthers’ Week 1 starting QB odds, picks, predictions and best bets are analyzed in the story below

Sam Darnold is currently slated to be the season-opening starting quarterback for the NFL’s Carolina Panthers. This, despite every effort of the Panthers’ front office to make this not be so.

Darnold is well aware that the team is in the market for his replacement. They’ve been upfront with him that they were shopping for another QB. Yet, no veteran QB has arrived to challenge Darnold for his job and it still appears to be his to lose.

Oddsmakers have also watched the failed attempts of the Panthers to make a change under center. Through that inability to engage a change, they’re setting Darnold as the -250 odds-on favorite to be Carolina’s starting QB in Week 1 of the 2022 NFL regular season in this NFL futures bet.

At an NFL betting line of -250, the implied probability that Darnold will be the Game 1 starting QB for the Panthers is 71.43%. Wager $10 on Darnold in this play and a payout on a successful wager would be $14.00.

In the NFL wins totals odds, Carolina is set at 6. Bet either the over or the under and the same -114 odds will apply.

When the Panthers recently held OTAs, Darnold was holding forth as the #1 QB on the depth chart. This even though the team was working behind the scenes to replace him as their starter.

It’s known that the Panthers were players in the Deshaun Watson sweepstakes that saw the former Houston Texans QB traded to the Cleveland Browns. Carolina also made a trade, giving up a third-round pick to move up and select Ole Miss QB Matt Corral with the 94th pick of the 2022 NFL Draft.

For his part, Darnold insists he’s just going about his business, blocking out all the outside noise. He understands the team is looking for a QB. That’s because they’ve been upfront with him and told Darnold that they were in the market to add someone at the position.

Panthers Linked to Other QBs

The Panthers have been linked to other NFL QBs beyond Watson. There’s been speculation of a Darnold for Baker Mayfield straight-up swap. Mayfield was left redundant in Cleveland with Watson’s arrival. However, now that Watson is suddenly looking like he’ll be facing a one-year suspension under the NFL’s personal conduct policy, it’s entirely possible that the Browns will be looking to keep Mayfield on the roster.

[email protected] makes the case for Baker Mayfield to the Panthers…

Another prominent QB name purportedly pursued by the Panthers is Jimmy Garoppolo of the San Francisco 49ers. But Garoppolo is coming back from shoulder surgery. Even if Carolina were to acquire him, there’s a chance he won’t be good to go for Week 1 of the NFL season.

New offensive coordinator Ben McAdoo, the former New York Giants head coach, is installing an entirely new offensive system for the Panthers. That adds another layer of intrigue since any QB acquired would need to be absorbing a lot in a short span of time.

Wait, so teams in late June are just now realizing it’s not a good idea to play Sam Darnold or Drew Lock at QB?#Seahawks #Panthers pic.twitter.com/VrTgzFCJR4

While they’ve made no promises to Darnold, publicly, the team is claiming that the club is impressed by the drive and attitude he’s been displaying through all of the uncertainty about his future with the team. Of course, it might’ve helped the Panthers’ cause of moving Darnold had they not triggered the guaranteed $18.55 million from the fifth-year option on his contract.

Looks like more of the same will be in store for the club this season.