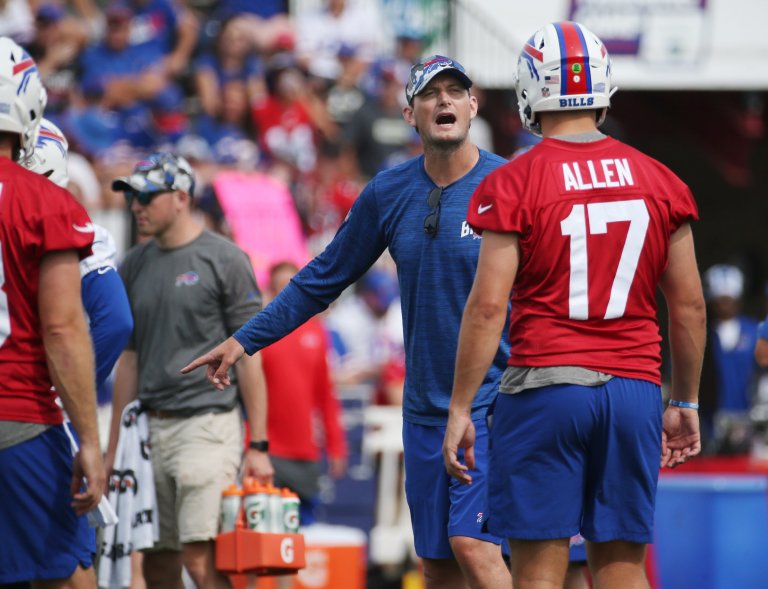 Oddsmakers are setting the Buffalo Bills as the +275 favorites to be the #1 seed in the AFC for the 2022 NFL playoffs
In the NFC, it’s the Tampa Bay Buccaneers at +325 holding forth as the #1 seed
See all of the odds for every AFC and NFC team to gain the top seed in their NFL conference in the story below

Odds are out projecting the top seeds in both the AFC and NFC for the 2022 NFL Playoffs. Based on the NFL betting trends from the past six seasons, one of the Buffalo Bills or Tampa Bay Buccaneers is likely to be the correct play in NFL futures bets.

Looking at those trends, the team you should probably be betting on is the Bills. Since 2016, at least one of the two teams that sports betting sites were projecting to be the #1 seed in either the AFC or NFC has delivered on that promise in four of the six seasons.

Three of the four times, the team delivering those goods was from the AFC. The Kansas City Chiefs were projected and finished as the top seed in the AFC in 2020. The New England Patriots made their top seeding prediction become reality in 2016 and 2017.

Last season, the Green Bay Packers came through as the NFC top seed, just as the preseason prognosticators were predicting them to be.

The Bills are given +275 odds to finish as the top seed in the AFC during the 2020 NFL season. Meanwhile, it’s the Tampa Bay Buccaneers who are the +325 betting choice to finish atop the NFC regular-season standings.

Are the Buccaneers the Best Bet In NFC?

In his two seasons as Tampa Bay’s quarterback, Tom Brady has led the Buccaneers to a Super Bowl win, an NFC South title and a pair of playoff appearances. What he’s never done, though, is get them there as the #1 seed. In fact, when Tampa Bay won the Super Bowl two seasons ago, the Bucs, an NFC Wild Card team, got to the big game by winning three straight road playoff games.

The New England top seedings in 2016-17 were Brady’s doing, so it’s never wise to count him out. Since 2010, though, just three NFC teams projected to top the conference standings actually have – Green Bay last season and in 2011 and the Seattle Seahawks in 2014. Tampa Bay is also the top choice in the NFL Playoffs odds among NFC teams.

Don’t Sleep On the Eagles

The smart money says the Eagles can’t be a Super Bowl contender with Jalen Hurts at QB. Well, you know what? The Eagles won a Super Bowl with Nick Foles as their QB.

Philly’s chances of topping the NFC at +1500 odds are buoyed by the fact they’ve been blessed with the easiest ride in terms of NFL strength of schedule. If they can win the battle for the weak NFC East with the Dallas Cowboys, the Eagles could land the NFC’s top seed.

Will the Bills Cash In AFC?

The last time Buffalo landed the top seed in the AFC was 1993. That was also the last time the Bills went to the Super Bowl.

Oddsmakers are banking on the Bills an awful lot this season. Buffalo is the +300 favorite in the AFC Championship odds.

The Bills seem to find ways to squander prosperity, however. Last season, a road loss to the woeful Jacksonville Jaguars cost Buffalo a chance at the top seed in the AFC.

Colts Are Worth a Look

Last season’s AFC top seed was from the AFC South. Could history repeat itself?

Seeking value in the AFC in terms of a top-seed play, look no further than the Indianapolis Colts. They’re adding QB Matt Ryan to an offense that features NFL rushing leader Jonathan Taylor and underrated wideout Michael Pittman Jr. And Indy’s defense is stout.

He told Reich he’d do this and Reich said the following: “We’ll follow your lead.”

Defending champion Tennessee figures to regress and the Jaguars and Houston Texans are far from prime time performers. The AFC South could be the NFL’s weakest division.