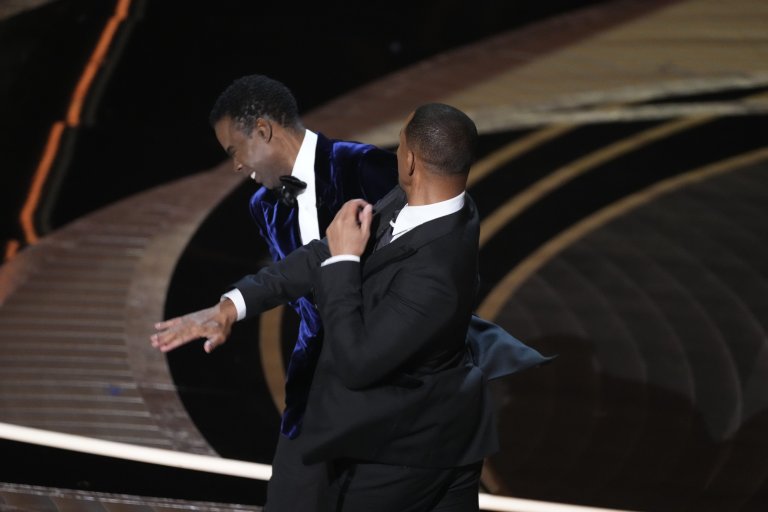 Marh 27, 2022: Will Smith slaps Chris Rock as he presents the award for best documentary feature during the 94th Academy Awards. Smith slapped the comedian after he made a joke about the actor’s wife, Jada Pinkett Smith.

No host is the odds-on -120 favorite for the upcoming 74th Emmy Awards
Former Saturday Night Live cast member Kate McKinnon is the top betting choice among actual people at +325
The Emmys are slated to be presented on Monday, September 12, 2022 in Los Angeles

With just over a month to go until the primetime Emmys are set to be doled out, the honor of hosting the awards for the best and brightest of television has yet to be assigned. Historically, the host is in place by this date.

The fact that no one has been named is fueling speculation that the plan is to go with no host. In fact, oddsmakers are setting no host as the -120 favorite for the 74th Emmy Awards.

Odds as of August 2.

Emmy Awards Get Slap In Face

After his altercation at the Oscars with Will Smith in which Smith came on stage and was slapping Rock, he’s been a hot commodity. According to published reports, the Emmy-producing team of Reginald Hudlin and Done + Dusted approached Rock to be host. Talk about a slap in the face – he said no thanks. Rock is currently touring and allegedly wants to be getting away from the Hollywood scene

Chris Rock and Dwayne Johnson have both been offered to host the Emmys but both are reportedly planning to turn it down.

Perhaps the Emmy producers should try paper or scissors because they’ve evidently been 0-for-2 with Rocks. Reports are that Dwayne “The Rock” Johnson also nixed a proposal for him to host the Emmys. Johnson produces the show Young Rock for NBC.

Among the NBC family, Tonight Show host Jimmy Fallon and Late Night host Seth Meyers are also giving a pass to a chance to be hosting this year’s Emmys. Both have hosted the awards show in previous years.

Sticking With The Home Team

Last year’s Emmys were carried by the CBS Network. Employed as host was Cedric The Entertainer, who holds a starring role in the CBS show The Neighborhood.

Networks like to utilize audience-drawing events such as awards shows to hype their own programming. So don’t be surprised if the host comes from a show carried by NBC.

Kenan Thompson on the NHL awards: “Because you’re hockey players, I have to tell you No Fighting. This is the NHL Awards, not the Oscars.”

With several of their big names looking like they’ll be taking a pass, maybe look a little further down the NBC lineup for value. SNL’s Kenan Thompson (+1100) recently served as host of the NHL Awards for the second time. Is he ready to step up to the big leagues of award show programming?

Amber Ruffin (+2200) is a rising star at NBC. She hosts the Amber Ruffin Show on Peacock, the NBC streaming network. As well, she also has award show hosting on her resume. Ruffin was the host of the 2018 Writers Guild Awards.

What’s The Play For Emmy Host?

At this late stage, getting a celebrity to commit to hosting is going to be a challenging task. The Emmys have gone hostless four times, most recently in 2019.

I believe NBC has the Emmys this year and if Amber Ruffin isn’t the host, somebody has done something very wrong. Or she politely declined because nobody’s ever going to want to host another awards show ever again. https://t.co/vS4bVuVhLH

If it isn’t going to be no one, then it almost certainly will be someone from NBC. Hedging your bet might be the smart money here. Play the no host at -120 but also place a small wager on Ruffin at +2200 in the Emmy odds.