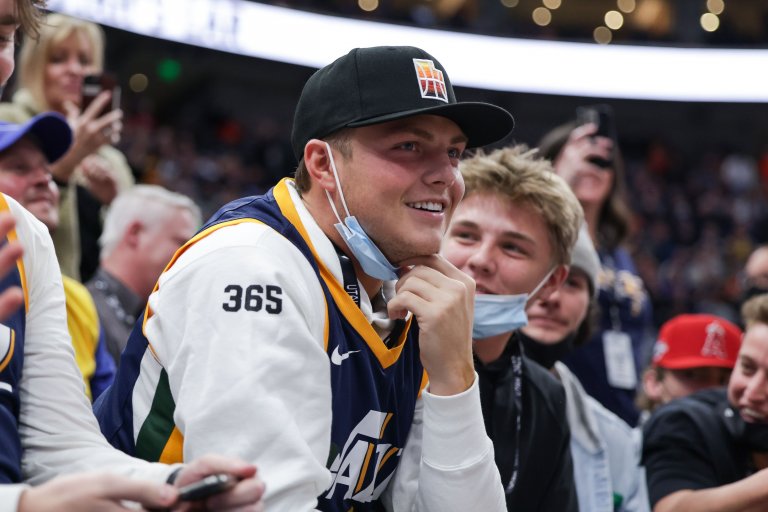 Jets QB Zach Wilson is a single man embroiled in previous love life drama
Rumors are running rampant about what led to his breakup with ex-girlfriend Abbey Gile
You can place bets on who Wilson will date next, from Kim Kardashian, Pamela Anderson and plenty more

It’s safe to say Zach Wilson’s first year in the NFL didn’t go according to plan – the 2021 second overall pick was at the helm of a New York Jets squad that finished 4-and-13. Though the team’s draft was hailed as being strong, their NFL Super Bowl Odds going into this season are bleak, as they’re second from the bottom.

Wilson’s life off the field has also had its fair share of ups and downs this year, with the 22-year-old breaking up with longtime girlfriend Abbey Gile. According to Gile, Wilson and her broke up because he was doing extra curricular activities with his mom’s best friend, a rumor his mom has shot down.

It’s almost as if being a quarterback for a team in New York would bring media scrutiny and paparazzi out for the juicy gossip. Who knew? Wilson, who apparently is now a free man, could be looking for his next relationship, and there are odds on who that might be.

Odds On Who Zach Wilson Will Date Next

Odds as of July 21st

Nearly all the women that are listed already are in long-term relationships or married, so finding a suitable partner for the Jets signal caller might be a little tricky. Elizabeth Hurley is the favorite, despite the 35-year age difference, as she currently is believed to be single.

Kim Kardashian, Halle Berry and Liz Tyler are all listed at +1400 to be Wilson’s next squeeze, with Kardashian officially divorcing Kanye West last month. She, however, is dating Pete Davidson, so she might not be the best option.

Zach Wilson’s Mom Lisa is hilarious. For all those trying to find the infamous Cougar, Lisa rules out one of the friends. pic.twitter.com/KkQd1aBpvd

Jennifer Lopez and Eva Longoria are +4000 longshots, and should either that come to fruition, it quite certainly would send the tabloids into a tizzy.

Ex-GF Gile isn’t listed as an option to get back with Wilson, as she’s now linked to Wilson’s former college roommate, best friend, and Washington Commanders receiver Dax Milne.

Elizabeth Hurley is the favorite at +1200 to be Wilson’s next partner. Her odds are slightly shorter than those of Kardashian, Berry and Tyler, who all are believed to be shacked up with lovers.

Hurley is believed to be single, thus why she’s the favorite. A quick glance at her dating history shows that she’s typically been with men around her age, which, in theory, would rule out the Jets QB.

With most of the choices being women who are already taken, it really does feel like it comes down to the presumptive favorite, plus someone else who is single.

Pamela Anderson has +2000 odds to be Wilson’s next girlfriend, which isn’t among the favorites but still very much within the realm of possibilities. It also provides considerably better value than Hurley. Back in January, Anderson announced she’s splitting from her fifth husband, Dan Hayhurst.

For better or worse, Anderson finds herself back in the news fairly regularly, and what better way to do that than to date a potential budding star quarterback in New York, despite the age gap. After all, if the rumors are Wilson’s penchant for liking older women are true, then she falls squarely into that category.