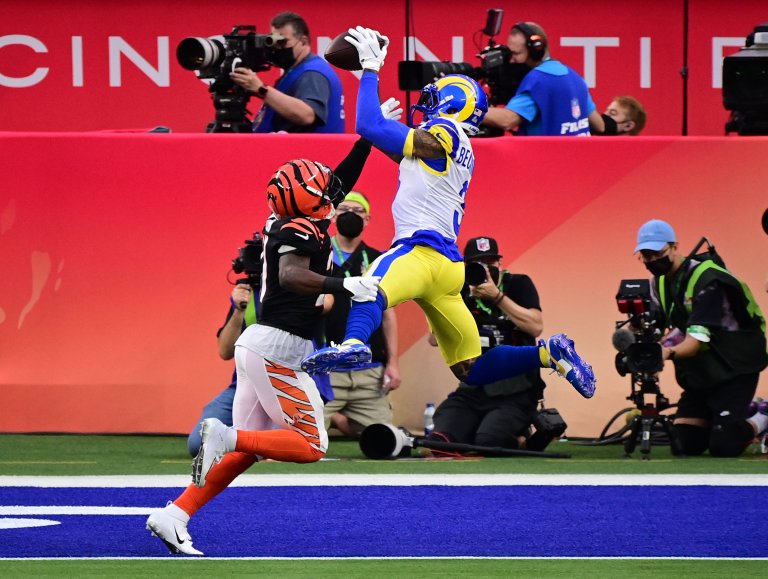 If the Los Angeles Rams are serious about repeating as Super Bowl champs, they’ll need to upgrade their third wide receiver spot.

In terms of big-name free agents suitable for the role, the list is dwindling. Julio Jones just signed with Tom Brady in Tampa Bay, leaving Odell Beckham Jr as the next best option.

OBJ is currently working his way back from an ACL tear that he suffered in the Super Bowl, and oddsmakers believe a reunion with the Rams is likely. They won a championship together last season, and LA has been installed as the favorite to sign the talented wideout.

Odds as of July 29th at DraftKings Sportsbook

The Rams boast +150 odds in this NFL betting market, followed by the Green Bay Packers and Baltimore Ravens. You could argue the need for a playmaking wide receiver is much greater in Green Bay, while the Ravens have short odds due to a close relationship between Beckham Jr and Lamar Jackson.

After a horrendous tenure in Cleveland, OBJ showed the football world he still had plenty left in the tank once he got to LA. He scored 5 TDs in eight regular season games with the Rams, and two more in the playoffs.

He established himself as a dangerous red zone threat, catching four of six targets inside the 10-yard line for scores, and proved he can still take the top off a defense.

#Packers DB Micah Hyde on Odell Beckham Jr.: “He can turn a 3-yard hitch route into a 70-yard touchdown. That’s the type of guy he is.”

Any team in the league can use a player like that, but Beckham Jr won’t be signing with a team that isn’t a contender in the Super Bowl futures bets streets.

Both Los Angeles and Green Bay are legit championship hopefuls, and it certainly looks like LA should be the favorite at the moment.

The Rams don’t want to play a full season with 165-pound Tutu Atwell as their third receiver, and they can afford to work with OBJ’s injury timeline, while the same can’t be said for Green Bay.

Beckham Jr isn’t expected back until as late as the midway point of the season, and LA can certainly stay competitive with Cooper Kupp and Allen Robinson as Matthew Stafford’s top-two targets.

Odell Beckham Jr. now has 7 receiving touchdowns with the Rams, including playoffs.

That ties Amari Cooper’s 2018 stint with the Cowboys for the most Rec TD by a player on a team that he didn’t start the season with. pic.twitter.com/0JLFQiJl4z

The Packers on the other hand are devoid of receiver talent, and need immediate help. Two of their top-three projected wideouts, Sammy Watkins and Christian Watson, weren’t ready for the start of training camp and no team should feel comfortable with Allen Lazard as their number one. If Beckham Jr were going to be ready by Week 1, Green Bay would be a much better bet at their current odds.

As for the Ravens, even if OBJ and Jackson are close, Lamar is a serious downgrade from Stafford. Baltimore also operates a slow paced, run dominant scheme that demands strong blocking from its receivers. Playing in a high tempo, pass-first offense in LA would be much more favorable for Beckham Jr’s skillset.

If the criteria is a championship contender, with a wide receiver need and a quarterback who elevates the talent around him, don’t sleep on Kansas City. The Chiefs have a lot of unproven wideouts behind JuJu Smith-Schuster, and you can even poke plenty of holes in his game.

KC isn’t going to hang Patrick Mahomes out to dry, and if they get off to a slow offensive start they won’t hesitate to make a move. The Chiefs’ window is right now, and teaming up OBJ with Travis Kelce could help take KC back to the promise land.

Don’t expect Beckham Jr to sign anytime soon. The contenders will come calling, but not until the first few weeks of the season play out. If you want to play it safe, bet the Rams. If you want to swing for the fences take a chance on the Chiefs.