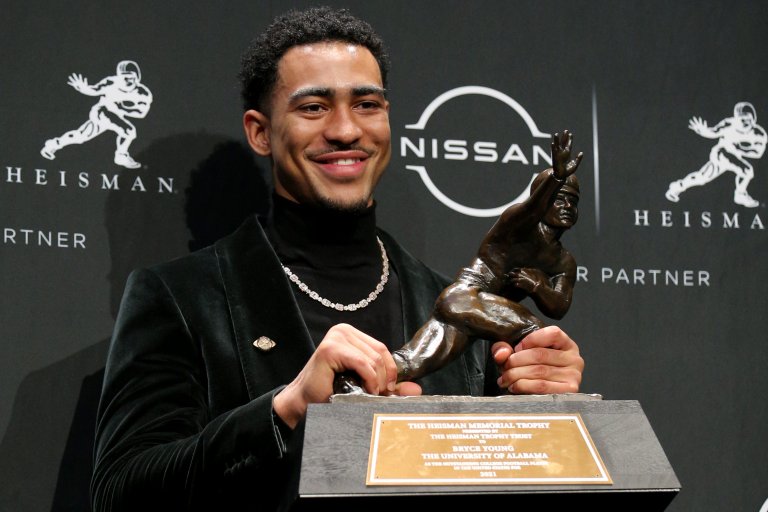 History suggests Alabama quarterback Bryce Young won’t repeat as the Heiman Trophy winner in 2022. There has only been one repeat winner of the prestigious trophy in the 86 years it’s been handed out since 1935.

Young opened as the preseason favorite in the 2022 Heisman Trophy odds but has since been overtaken by Ohio State quarterback CJ Stroud. Oddsmakers are listing Young at +350 despite the fact he closed last season as a massive -3500 favorite.

Let’s analyze Young’s chances of repeating and whether he’s worth a preseason Heisman wager at plus-money.

Bryce Young returns to quarterback an Alabama offense that may not be as dangerous in the passing game as they were in 2021. The Crimson Tide averaged 338 passing yards per game last season, which was second in the SEC.

Young passed for 4,872 yards and 47 touchdowns with only seven interceptions in 2021. The 21-year-old pivot wasn’t a factor in the ground game (3 rushing yards) and was surprisingly sacked a whopping 39 times.

The concern around Young in the view of the oddsmakers is some key departures at wide receiver, plus question marks about Alabama’s offensive line. Young’s top two receiver targets from last season, Jameson Williams and John Metchie, are now playing in the NFL.

Alabama is doing some reshuffling to improve their offensive line, but they’ve lost star tackle Evan Neal to the big leagues. Only three players with starting experience return to Bama’s O-line in 2022, which is problematic given the struggles they had protecting Young in 2021.

Why Repeat Heisman Winners Are So Rare

There has only been one repeat Heisman winner in history since the award was created in 1935. Ohio State running back Archie Griffin accomplished the feat in 1974-1975, rushing for 2,977 yards and 19 touchdowns over the two seasons.

Griffin won his second Heisman Trophy as a senior, which is a notable trend for the college football MVP award. Players tend to perform their best with plenty of experience under their belt, as 60 of the 86 Heisman winners have been seniors.

While Young will be a junior in 2022, this is expected to be his final college season before he heads to the NFL in 2023. The positive is Young’s main Heisman competition this season (CJ Stroud and Caleb Williams) are also both second-year starters and don’t have a ton of experience.

Furthermore, Young benefits from Alabama being the preseason favorite in the National Championship odds. The reason talented young Heisman winners like Johhny Manziel, Lamar Jackson and Tim Tebow never won a second trophy was largely due to their teams picking up crucial losses.

The Will Anderson Factor

One of the reasons Bryce Young is seeing his 2022 Heisman odds lengthen is because the Crimson Tide have another strong candidate for the award. Heisman Trophy public betting splits show that Alabama DE Will Anderson is the second-most popular preseason Heisman pick.

Will Anderson is the best defensive player in college football and could receive his dues this season after being snubbed for the Heisman ceremony in 2021. The elite edge rusher led the FBS in both tackles for loss (34.5) and sacks (17.5) last season.

History suggests that even Anderson winning the Heisman isn’t a smart bet, as no college football program has ever produced three consecutive Heisman winners. Even if Young and Anderson dominate this season, will there be Bama fatigue by the time the ballots are due?

Alabama WR DeVonta Smith won the Heisman in 2020 before Young claimed the trophy in 2022. We could be looking at an unprecedented three consecutive Alabama Heisman winners if voters elect to give the award to Young or Anderson in 2022.

The odds are clearly stacked against Bryce Young repeating as the Heisman Trophy winner in 2022. Not only does history suggest it’s unlikely to occur, but Young’s also competing this season with a teammate some are labeling a “generational defensive prospect”.

There’s no need to rush and make a preseason Heisman bet on Young. The Alabama pivot was available at plus-money for most of last season before his Heisman odds took off following a record-breaking SEC championship performance vs Georgia in December.

The Tide have a relatively easy non-conference schedule to start the year before their SEC slate really ramps up in October. Given the hype around other Heisman contenders, there should be enough time to properly evaluate Alabama’s O-line and their new receivers before determining if Young is worth a wager to make history.