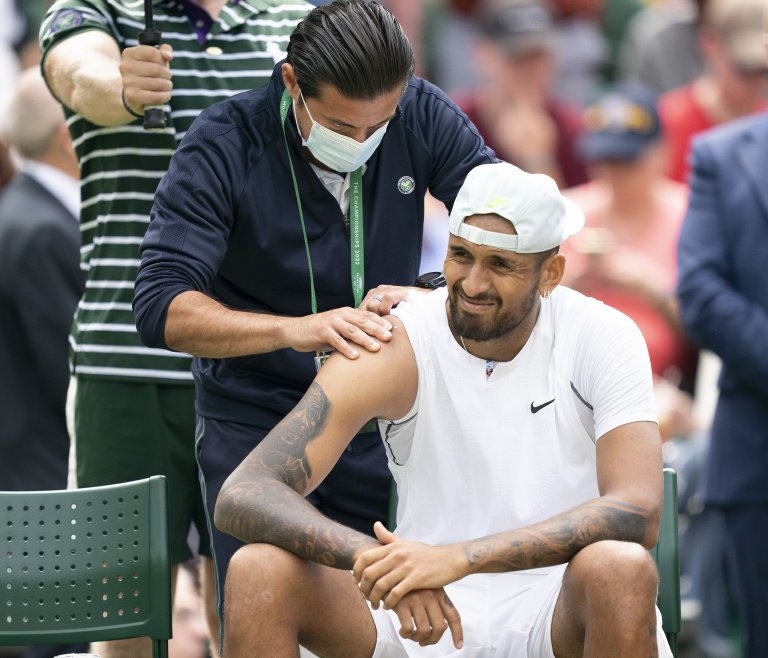 No. 1 seed Novak Djokovic meets unseeded Nick Kyrgios in Sunday’s Wimbledon men’s final (9 am ET)
Kyrgios is well-rested, as semifinal opponent Rafael Nadal gave him a walkover on Friday
Djokovic is the favorite, despite being 0-2 v Kyrgios lifetime. We break down the Novak Djokovic vs Nick Kyrgios matchup here

It wasn’t necessarily the Wimbledon men’s singles final most expected.

But it’s not without its intrigue and drama – to say the least.

Novak Djokovic, the No. 1 seed, has been the favorite since before the 2022 edition of Wimbledon began. And that remains so, although he’s not a dominant favorite because everyone knows what Nick Kyrgios brings to the table.

Kyrgios is somewhat shocked, nervous, and thrilled to be in his first Grand Slam final.

Both can get pretty … demonstrative on court. And with so much at stake (although no ranking points), it will be a matter of who remains calmer.

The difference is that Djokovic can have moments when he’s agitated – but still come out on top. For Kyrgios, it’s somewhat more complicated.

Djokovic in Four Sets Over Norrie

Djokovic was a prohibitive favorite to win his semifinal over another late-Slam neophyte, British lefty Cameron Norrie.

But Norrie got off to a good start before Djokovic got his bearings.

Which made our prediction that Djokovic would win in four sets look like a premonition.

Too Much Rest for Kyrgios?

When Kyrgios walks onto Centre Court at 2:00 pm London Time Sunday (9:00 am EST), he will have had five days off since his quarterfinal win.

That will help with the shoulder aches he had earlier in the week.

It’s a great period of time to get the body healthy at this stage of a major. It’s also a whole lot of time for all kinds of things to run through Kyrgios’s head.

He admitted as much in his press conference Friday. It was impressively revelatory.

The two have only played twice. And it’s been more than five years since those two meetings in 2017, which came back-to-back in Acapulco and Indian Wells.

A lot has changed.

But the big caveat on those Kyrgios wins – not that he doesn’t have the talent to beat anyone on a given day – is the stage of Djokovic’s career at the time.

The Serb had been dealing with an elbow issue for a year, finally backing down on his resistance to surgery and having a procedure in February 2018.

He lost in the second round of the Australian Open that year, the quarters at the French Open – and called it a season after retiring to Tomas Berdych in the Wimbledon quarterfinals.

Djokovic hasn’t played his best tennis this Wimbledon. But he’s healthy and in the back of his mind, he knows that the US Open and next year’s Australian Open are definitely question marks in his quest to add major titles to his resumé.

Who Will the Fans Cheer?

These two have had their ups and downs. But Djokovic acknowledged that Kyrgios had his back when the Serb found himself deported from Kyrgios’ homeland back in January.

#Djokovic and #Kyrgios at Aorangi.

Novak: It took you five years to say something nice about me, haha.

Nick: But I defended you when it mattered!

Novak: You did, I appreciate that. #Wimbledon pic.twitter.com/om8XQn1A4B

If it seems incongruous at buttoned-down Wimbledon that they’ll cheer for tennis’s bad boy (and the one whose day in court on potential domestic abuse charges surfaced this week). But so many seem to love him.

Djokovic, who has won the last three Wimbledons, has his ups and downs with the crowd.

“I think @NickKyrgios is brilliant for the sport.” @Liambroady weighs in on the #Wimbledon debate in a @BBCBreakfast interview:https://t.co/znURPqjTf5

It’s likely they’ll get more strongly behind whoever falls behind. And that is likely to be Kyrgios.

Kyrgios will either come out flat or on fire. We’re betting on the latter.

Him taking the first set, and Djokovic coming back to win, is at +275.