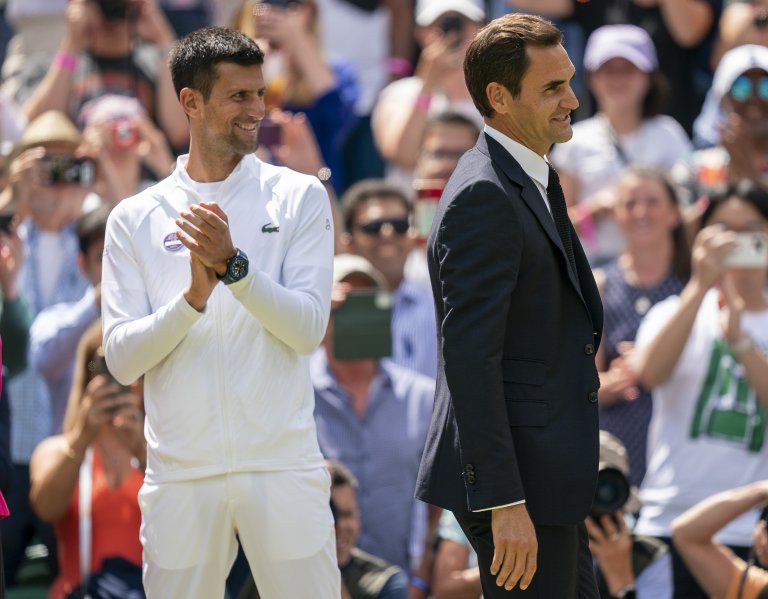 Jul 3, 2022; London, United Kingdom; On the inaugural middle Sunday for play, Wimbledon celebrates 100 years since their move to Church Road and the centenary of Centre Court. Past champions were on court for this special ceremony on day seven at All England Lawn Tennis and Croquet Club. Shown here: Novak Djokovic (SRB) and Roger Federer (SUI). Mandatory Credit: Susan Mullane-USA TODAY Sports

Novak Djokovic had to expect he’d play Carlos Alcaraz in Tuesday’s Wimbledon quarterfinal
Instead, he will meet No. 10 seed Jannik Sinner, who upset Alcaraz in the round of 16
Djokovic is a massive favorite; we break down the matchup and make some predictions

The biggest difference-maker there is experience.

Odds as of July 4 at Barstool Sportsbook. Get this Barstool promo code before betting on Wimbledon

Novak Djokovic has 20 Grand Slam titles, six of them at Wimbledon.

And he’s won the last three Wimbledons that were held. No wonder he was the pre-event favorite on the best tennis betting sites.

For Sinner, it’s a third career major quarterfinal, after he reached the final eight last January in Australia as well as in 2020, at the postponed fall version of the French Open.

Notably, he has reached at least the round of 16 at six of his last eight majors. Which is good consistency, but a long way from Djokovic territory.

Even without much tennis, and a sleeve on a wonky elbow, Carlos Alcaraz still looked to get through.

Before the tournament began, only Djokovic had better odds than Alcaraz to win their quarter of the draw; Sinner was down at +2800.

But Alcaraz, who is both precocious and prodigious, had a day when he very much looked his tender age.

And Sinner showed a little more experience – even though, until this year, he had never even won a match at Wimbledon.

Djokovic had a potentially big challenge himself, in the breakout player of this year’s grass-court season: wild card Tim Van Rijthoven of the Netherlands.

Van Rijthoven, 25, was outside the top 200 when the deadline for Wimbledon qualifying came and went. Who knows if he gets out of Roehampton, especially with a best-of-five final round.

But because his shock win at ‘s-Hertogenbosch pushed him close to the top 100 (and inside the main draw rankings cutoff), Wimbledon did the right thing and gave him a wild card.

He made them look good with wins over Federico Delbonis, Reilly Opelka and Nikoloz Basilashvili.

But Djokovic is a different level.

The former world No. 1, looking to make it four Wimbledons in a row, has had a few hiccups along the way.

He dropped a set to Soonwoo Kwon of Korea in the first round, rolled through Thanasi Kokkinakis and Miomor Kecmanovic, and had another little bobble vs Van Rijthoven.

Generally speaking, though, he’s playing well enough to get to the final (at least). Especially considering who has survived in the other part of the top half of the draw.

The match against Sinner might be his toughest until the final. But even as Monday night wore on, Sinner’s odds were getting longer.

Which doesn’t mean Djokovic will roll in straight sets. It would be a huge statement if he did, but Sinner is good.