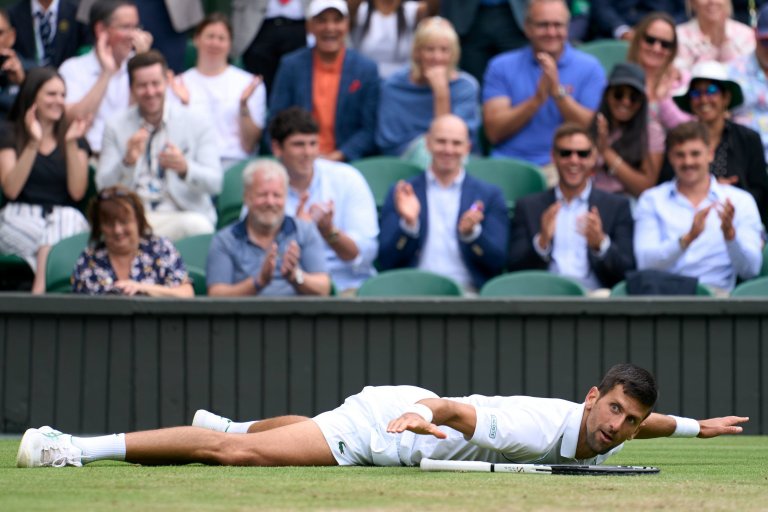 With all of the drama on the other side of the draw involving Nick Kyrgios’s off-court issues and Rafael Nadal’s abdominal tear, Novak Djokovic has sort of cruised through this Wimbledon under the radar. Friday will feature a Novak Djokovic vs Cameron Norrie matchup with a ticket to the final on the line.

Considering Djokovic has won the last three editions of the tournament, that’s an impressive feat.

Djokovic is a prohibitive favorite to reach the final, as he’s been since before it began.

It remains true even if his opponent, Cameron Norrie, has played brilliant tennis the last year or so, is No. 12 in the world, is a lefty, and will have most of Centre Court rooting for him.

It wasn’t looking quite that good when 20-year-old Jannik Sinner was dominant in winning the first two sets against the No. 1 seed in their quarterfinal match.

But the best-of-five format has proven a great friend to the top guys time and time again. Once the Djokovic machine started purring, there wasn’t much the young Italian could do.

#Djokovic “The toilet break was the turning point, I gave myself a pep talk in front of the mirror. I had to change something. I was not playing well, I was not feeling well and I was dominated by #Sinner.” #Wimbledon pic.twitter.com/RCxNXiECHQ

Impressively, Djokovic went 28-for-39 at the net.

He credited some self-talk during a comfort break for the turnaround.

Despite his status as a Brit (born in South Africa, and raised in New Zealand a Brit), Norrie hasn’t benefited from the same prodigious number of wild cards as most of his countrymen. Not even into the qualifying, through his years playing college tennis in the US.

Mostly, he’s been overlooked by his own federation.

At 21, in 2017, he got a wild card for the first time. Norrie was 3-4 at Wimbledon coming in, with his best previous result by ranking a first-round win over No. 95 Lucas Pouille a year ago.

So his run to the semis, on the heels of winning just one match in two prep tournaments, was a surprise.

But in the end, his increasingly legendary fitness allowed him to get past a shaken and baked David Goffin in five sets in the quarterfinals.

Norrie has faced just one seed on the runup to the semis – and that was a very low seed, No. 30 Tommy Paul.

Djokovic will have his fans; he has them around the globe.

But with Andy Murray getting up there, and with a new hip, it has been a pleasant surprise for the British fans to have one of their own to cheer for.

So cheer they will. Maybe even the Prince of Wales and Kate will be on hand again, as they were for his quarterfinal.

If Djokovic finds himself behind and gives the patrons any grist for the mill, they will let him know and that will either motivate him more or throw him off.

Maybe Norrie’s multi-country background will help him navigate the nerves, given he’s not as dug in as a born-and-raised Brit might be.

He has shown un-Norrie-like emotion at times, during the fortnight. Because most of the time he doesn’t look like he has a pulse.

But Djokovic can smell the final. He’s not going to let Norrie stand in his way, even if he has to break the collective heart of England to do it.

But whoever wins, they will face a very fresh Nick Kyrgios, who won his semifinal when Rafael Nadal withdrew because of his abdominal tear.