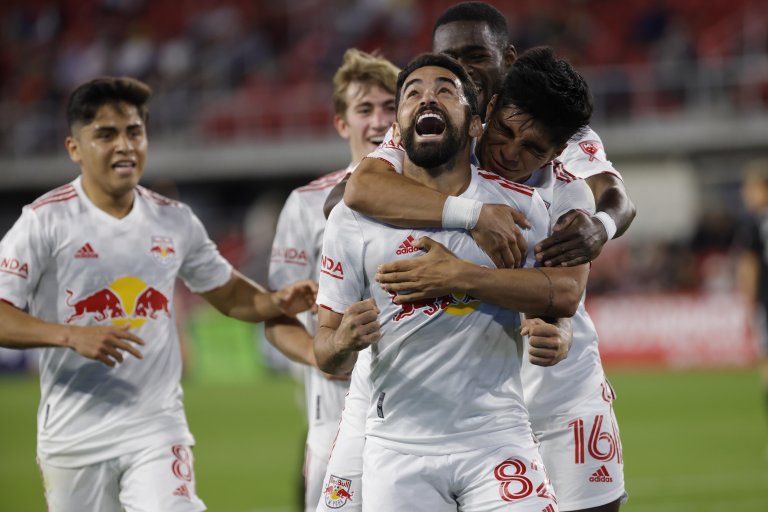 May 10, 2022; Washington, DC, USA; New York Red Bulls midfielder Luquinhas (82) celebrates with teammates after scoring a goal against the D.C. United in the first half in a US Open Cup match at Audi Field. Mandatory Credit: Geoff Burke-USA TODAY Sports

The Red Bulls currently sit fourth in the Eastern Conference – just three points behind the leaders, NYC – while Toronto has had a tough start to the season and is currently down in 12th place.

We preview New York Red Bulls vs Toronto FC and offer below some analysis, team news, and picks for this huge MLS clash.

Odds as of June 17 at Caesars Sportsbook.

The draw, unsurprisingly, offers a good return at +420 with an implied probability of 19%.

If you’re new to betting on soccer and want to know about Asian Handicaps and Pointspreads, then our page offers help on how to bet on this game and MLS games.

The Red Bulls have made a decent start to the new campaign and, while down in fourth in the Eastern Conference, are just three points adrift of the leaders and city counterparts, New York City, albeit having played two games more.

With a 6-5-4 winning record, the Red Bulls have put themselves in the heart of the playoff places and if they can maintain this level of consistency they will definitely make it to the post-season. Their main strength so far has been a good defense that has conceded just 17 goals in their 15 games, with only the two at the top in the Conference, NYC and Philadelphia, having conceded fewer.

Defeat in Charlotte for RB

The Red Bulls do, however, come into this game off the back of a defeat, and their 2-0 defeat in Charlotte last Saturday was the product of one of their worst performances of the season. The home side totally dominated possession (62%) and, with the Red Bulls registering just a total of just seven shots, goals in first and second-half injury-time were more than enough to give the home team the win.

If you can’t stand the heat, get off the training pitch 🔥 pic.twitter.com/uoUJ4Zc4pf

Last season, the Red Bulls finished seventh in the Eastern Conference – qualifying for the playoffs in the process – but were knocked out by Philadelphia Union, after extra time, in the first round of the playoffs. This season they will be hoping to progress further.

For Toronto FC, it’s been a difficult campaign. With an underwhelming 4-3-7 record, they currently sit 12th in the Eastern Conference, with their biggest problem being in defense, where they have conceded 27 goals in their 14 games – the worst in the Conference.

In front of goal, they have been okay – 21 goals in 14 games – but in order to claw their way up to the top half of the table and the playoff places, they need to strike a more productive balance between defense and attack.

Toronto are, however, unbeaten in three and have won their last two. Just before the international break, they recorded a useful 3-2 over bottom-of-the-table Chicago, which followed a win over Wanderers in the Canadian Championship.

They will be hoping to carry this momentum into the middle third of the campaign as they look to make a charge for the playoff places and, at the very least, improve upon last year’s disappointing 13th-place.

Toronto’s poor start to the campaign makes this look like a home banker and is why the bookies favor the Red Bulls so strongly, but three games without defeat will have given the Canadians a lift.

The Red Bulls have the top two in their sights though and backed up by that solid defense will be looking to bounce back strongly from the lackluster defeat in Charlotte. So, while this may not be the easy ride the bookies suggest, it’s hard to see anything other than the home win.