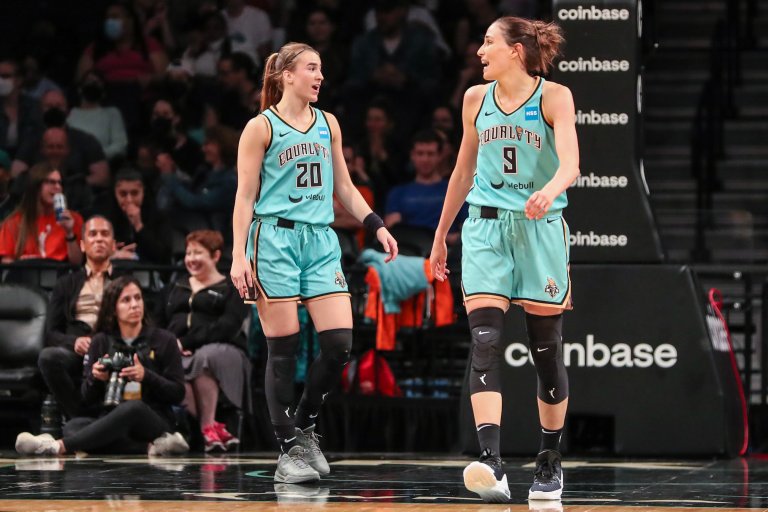 The Washington Mystics are 8-point home favorites over the New York Liberty in a WNBA game slated for Thursday, July 21
New York is 2-0 straight up against Washington this season. Washington is 8-4 SU at home this season
Get the Liberty vs Mystics odds and our best bet below

Not all that much has gone right for the New York Liberty (9-16, 5-7 away) during the WNBA season but when they’ve taken the floor to face the Washington Mystics (16-11, 8-4 home), the Liberty have proven to be utterly mystical.

The Liberty are a perfect 2-0 against Washington this season. They’ll be looking for a sweep of the regular-season series  when they again face the Mystics on Thursday.

Oddsmakers aren’t sold on New York being third-time lucky, though. It’s the hometown Mystics who are being tabbed as 8-point favorites in the WNBA betting line. This even though the Liberty are 4-0 straight up in the past four meetings with the Mystics.

Tipoff for this game at Capital One Arena is set for 11:30 am ET. Catch all the action on NBA TV.

In the WNBA betting trends, the Mystics are the fifth betting choice in the WNBA Championship odds at +900. Wager on the Liberty to be winning the title and you’ll be able to access a betting line of +4000.

When the Liberty and Mystics last met in Washington, it was the Sabrina Ionescu show. The Liberty guard scored a game-high 24 points as New York beat Washington 74-70 on June 1 at the Capital Center.

Ionescu hit a season-high five 3-pointers in that game. She collected half of her 24 points during the third quarter. Natasha Howard (17) and Rebecca Allen (11) also netted double digits for New York in that game.

In the most recent meeting between the two teams on June 16 at the Barclays Center, New York won 77-65. Howard scored 27 points, Han Xu scored 12 and Ionescu added 10.

Mystics Seeking to Solve Riddle That Is Liberty

In that 77-65 loss to New York, Washington star Elena Delle Donne didn’t play. She’s been taking games off this season to rest her back. A back injury caused her to miss all of last season. Delle Donne did play in the 74-70 setback to the Liberty on June 3, scoring 15 points and grabbing eight rebounds. She’s scored 15 or more points in 14 of 18 games this season.

New York outscored Washington 44-24 in the paint in the last meeting between the two teams. Natasha Cloud was the top scorer for the Mystics in both games this season against the Liberty. She’s scored 17 points in each contest.

While the Liberty have held forth in recent meetings, take the head-to-head comparison back a bit further and the pendulum swings to the Mystics. Washington is 8-5 SU in the past 13 games between the two teams.

In two of Washington’s last four victories over New York, the Mystics won by identical 101-72 outcomes. Over those past four wins, Washington’s average margin of victory is 22 points.

Against the Mystics, the Liberty are 51-39 (.567) in the all-time regular season series. Last season, New York won two of three meetings against Washington. It was the first time the Liberty took the season series since 2017.

Liberty are now 1-6 over their last 7 games and face the Mystics on Thursday followed by facing the Sky twice. ? #Ownthecrown

New York is just 2-5 SU in the past seven games played at Washington. The Liberty haven’t won successive road games from the Mystics since 2016.

Washington is 4-0 SU over the club’s past four home games. New York is 3-3 SU over the past six road games.

Maybe don’t overthink this one. New York is dominating the series the past two seasons. In their four straight wins over the Mystics, the Liberty show an average margin of victory of 6.5 points.