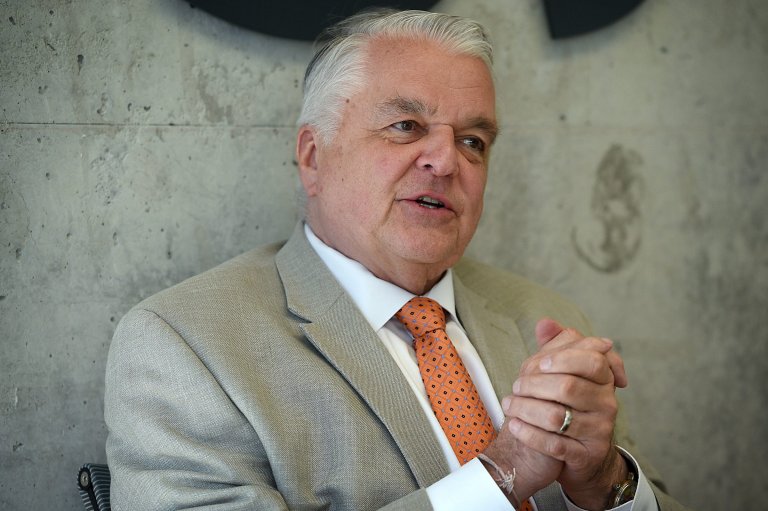 Nevada Governor Steve Sisolak speaks to the media in the Reno Gazette Journal’s newsroom on Feb. 25, 2022.

In the race for Governor of Nevada, Steve Sisolak is seeking to do what no Democrat has proven able to achieve in nearly a quarter century – win a second term.

In fact, by winning his first term, Sisolak is already an overachiever. Prior to his 2019 win, no Democrat had captured the Nevada Governor’s chair since 1999.

On the other hand, when Democrats are winning the Gubernatorial election in the Silver State, they tend to be holding on to the position. Bob Miller served from 1989-99. Prior to Miller, fellow Democrat Richard Bryan was serving as Governor from 1983-89.

Oddsmakers are giving Sisolak slight favorite’s odds to be retaining his position. He’s the -125 chalk to win the Nevada election for Governor. Betting sites are assigning Republican challenger Joe Lombardo is a betting line of -110.

Note that the odds quoted above are from Bet365, a sportsbook which is permitted to offer political futures in European and UK markets. This market is not open to US bettors.

Libertarian Brandon Davis and Independent Ed Bridges are also on the ballot in the Nevada Governor election.

At a betting line of -125, Sisolak and the Democrats are being given an implied probability of victory that works out to 55.56%. A $10 wager on him would return a payout of just $18.10 should they be the party that wins the 2022 Nevada Gubernatorial election.

The people of Nevada will go to the polls to elect a new Governor on November 8, 2022.

Sisolak ran away with the Democratic Primary for Governor. He won 90.3% of the votes cast. Sisolak’s win in the last Gubernatorial election made Nevada a Democratic state trifecta for the first time since 1992.

Lombardo has been serving as Sheriff of Clark County, Nevada since 2015. Winning the Republican nomination on June 14, 2022. Lombardo garnered 38.3% of the vote, defeating 11 other candidates.

Lombardo has some heavy Republican hitters swinging in his corner. Among those endorsing Lombardo for election are embattled former US President Donald Trump, who remains the favorite in, not just the 2024 Republican nominee odds, but the presidential election odds as well. He’s also got former US Secretary of State Mike Pompeo and ex-US Ambassador to the United Nations Nikki Haley on board.

Guys, the well-oiled machine that is the Nevada Republican Party is all-in for the guy at the top of the ticket….Mike Lombardo.

Say it ain’t so, Joe! pic.twitter.com/FnhWPcplIA

This is somewhat surprising. Other candidates in the Republican Primary were leaning much harder to the right than Lombardo. In fact, runner-up Joey Gilbert espoused Trump’s unproven claims that the 2020 US Presidential election was rigged. Meanwhile, Lombardo has confirmed that Joe Biden is the duly elected President.

Lombardo has significant name recognition. He was charged with overseeing the investigation into the 2017 Las Vegas Strip mass shooting. This is his first election where Lombardo isn’t running for a law enforcement position.

A majority of political punditry sites are calling the race between Sisolak and Lombardo as a toss up. Analytics site FiveThirtyEight.com is calling it as leaning Democrat.  Inside Election is touting the race as tilting toward the Democrats.

The two most recent independent polls are both showing Sisolak with a slight lead over Lombardo. A Suffolk University poll is declaring Sisolak ahead 43-40%. Emerson College polling comes up with virtually the same outcome. Sisolak is at 44% and Lombardo at 40%. As recently as June, Sisolak held a 43-31% edge over Lombardo. This could be an indication that many undecided voters are moving toward the Republican candidate.

NEVADA
At this point who would you vote for or lean toward if the election for governor were held today?

Analytics site FiveThirtyEight.com averages out every poll in the Nevada Gubernatorial race. Their data shows Sisolak in front of Lombardo 44.6-43.2, with 12.2% listing as undecided.

Sisolak won with 49.4% of the vote in 2019. He probably won’t be garnering that much support this time around, but should get enough to earn re-election.