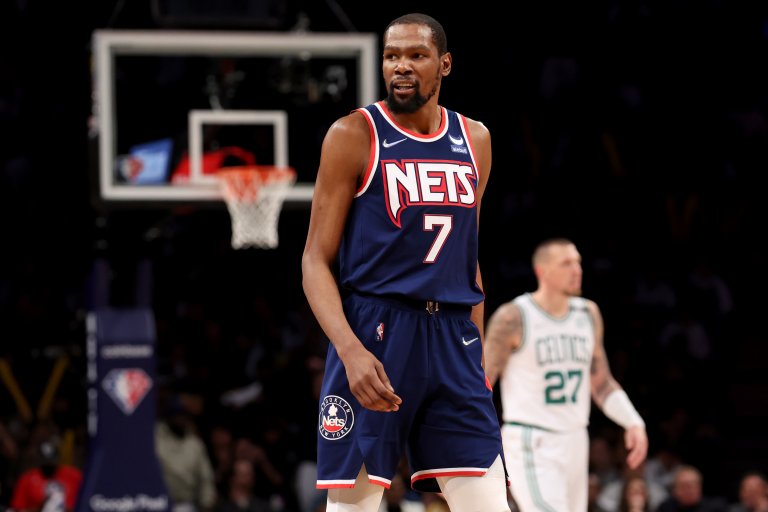 Apr 25, 2022; Brooklyn, New York, USA; Brooklyn Nets forward Kevin Durant (7) reacts during the fourth quarter of game four of the first round of the 2022 NBA playoffs against the Boston Celtics at Barclays Center. The Celtics defeated the Nets 116-112 to win the best of seven series 4-0. Mandatory Credit: Brad Penner-USA TODAY Sports

Rescinding his trade request, Kevin Durant is opting to remain with the Brooklyn Nets
The odds of the Nets winning the NBA Championship shortened to +700 after the news broke
Prior to Durant’s declaration, Brooklyn was +1800 to take the NBA title

Kevin Durant has had a change of heart and because of it, the Brooklyn Nets are undergoing a change of odds.

Durant is rescinding his trade request. He’ll instead be staying with the Nets.

Suddenly, everything is changing on the NBA landscape as far as Brooklyn is concerned.

Before the news broke, bettors could access a betting line of +1800 on the Nets in the 2022-23 NBA Championship odds. Today, those odds have shortened to as low as +700 at some of the leading online betting sites.

A Monday meeting took place in California between Durant, his agent Rich Kleiman and the Brooklyn management team of owner Joe Tsai, general Manager Sean Marks and head coach Steve Nash. When the meeting concluded, whatever concerns Durant harbored about his future with the Nets were smoothed over. He was planning to stay put in Brooklyn.

On June 30, shortly following Brooklyn’s first-round ouster from the NBA playoffs via sweep at the hands of the Boston Celtics, Durant delivered an ultimatum to the Nets. They could either fire Marks and Nash, or trade him to another NBA team.

In a statement from Nets GM Sean Marks: “We are focusing on basketball, with one collective goal in mind: build a lasting franchise to bring a championship to Brooklyn.”

After June 30 trade request, Kevin Durant will stay with the Nets. https://t.co/V0rd8fSQLr

The trade demand came just one year after Durant and the Nets agreed on a four-year, $198-million contract the was to keep him with the team long term. Tsai was adamant that he wasn’t going to fire either Nash or Marks.

Setting out to deal Durant, the Nets found that their asking price was too high to garner any bids. They were seeking an all-star of Durant’s ilk, some young talent and a cache of first-round draft choices.

No team has seen the wild movement in betting lines that have been witnessed on the odds board with the Nets. The NBA Championship odds on Brooklyn were as high as +5000 in June, when it was appearing that both Durant and guard Kyrie Irving were going to be traded. The betting line on the Nets winning the Atlantic Division title climbed as high as +1500.

In the end, Kevin Durant and the Nets played out in a similar way to Kobe Bryant and the Lakers in 2007: A tumultuous summer after a trade request, talks with teams, no deal and ultimately a decision to return to the franchise.

Today, with the Durant news, BetMGM has shortened Brooklyn’s title odds to +700. However, if you’re looking to bet the Nets to win the NBA Championship, shop odds and you’ll still be able to access betting lines of +800 at Caesars and Barstool Sportsbook.

Nets Keeping Talent In The Fold

Brooklyn has never won an NBA title, but with players such as Durant, Kyrie Irving and Ben Simmons all staying on board, the nucleus for an opportunity is definitely there.

Durant is a past NBA MVP and a two-time NBA Finals MVP. He’s won a pair of titles with Golden State and led the NBA in scoring four times. Irving is a seven-time NBA All-Star. Simmons is a three-time NBA All-Star and like Durant and Irving, was voted NBA Rookie of the Year.

I’m happy to hear that Brooklyn Nets owner Joe Tsai worked out a deal with the dynamic superstar Kevin Durant and his agent Rich Kleiman that made KD happy and want to stay with the Nets to try to bring a championship to Brooklyn!

There’s no super team in the NBA. Brooklyn has jumped up into the co-third betting choice to win it all.

Are the Nets worth a wager in the NBA Championship odds? Sure. But they would have been a much better play when they were at +5000.