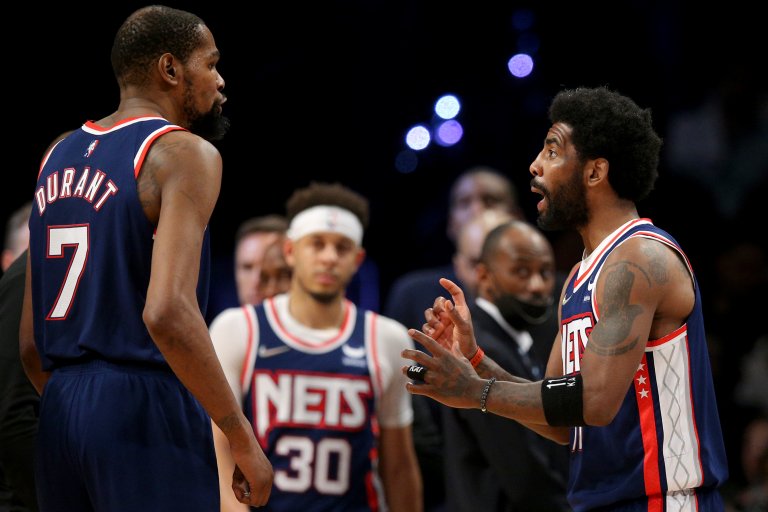 Apr 25, 2022; Brooklyn, New York, USA; Brooklyn Nets guard Kyrie Irving (11) talks to forward Kevin Durant (7) during the fourth quarter of game four of the first round of the 2022 NBA playoffs against the Boston Celtics at Barclays Center. The Celtics defeated the Nets 116-112 to win the best of seven series 4-0. Mandatory Credit: Brad Penner-USA TODAY Sports

The Brooklyn Nets’ NBA title odds have shortened after Kyrie Irving picked up his player option
There is still a degree of uncertainty over Irving’s future
Are the Nets worth backing at their current price?

After some typical fanfare, including rumors he could sign elsewhere for the taxpayer midlevel exception, Kyrie Irving picked up his $36 million player option. This, in theory, gives the Brooklyn Nets an element of security heading into 2022-23. It has resulted in the Nets’ NBA Championship Odds moving in to +650, having lengthened to +800 when it appeared that Irving and potentially Kevin Durant were going to leave the team.

There is still considerable uncertainty when it comes to evaluating the Nets in NBA Betting markets, however. This is a team synonymous with turmoil, and the remainder of the offseason is unlikely to be a smooth path.

Odds as of Jun 30 at DraftKings Sportsbook

Kyrie Could Still Be Traded

As ever with the Nets and Irving, it isn’t as simple as it looks. In the aftermath of Irving picking up his option, Brian Windhorst reported that this is not necessarily the end of the saga. Trading Irving is actually much easier for the Nets now given the complications of the hard cap if they had to construct a sign-and-trade. It remains possible that this is a strategy from Irving, and he still looks to force his way out.

Putting together matching salaries is a smoother process for the teams on Irving’s list. Avoiding the hard cap in an Irving trade could make some teams rethink after there was seemingly no interest in sign-and-trade scenarios.

Brooklyn was clearly happy to play hardball with Irving over an extension, and perhaps they are content pushing this into next offseason and risking losing him for nothing. Alternatively, they could explore the trade market and see if they can get a couple of useful players to fit around Kevin Durant and Ben Simmons. They are not going to get a player of Irving’s caliber back in a deal.

That takes us to the biggest factor with betting the Nets for the title: Kevin Durant. There were murmurs the two-time Finals MVP could demand a trade if Irving left. He has also publicly stayed away from comment, neither confirming his desire to stay or leave. When healthy, Durant is still among the leading candidates in NBA MVP Odds, but does he still think he can win in Brooklyn?

As has been the case since Irving and Durant signed, the Nets are a great team in theory. The shooting of Joe Harris and Seth Curry, along with the playmaking and defense of Simmons, is an ideal complement to the two stars. If whole, that team has a shot at a deep playoff run. There are still so many variables, though, from the availability of the ‘Big Three’ to how the roster is filled out in the rest of this offseason.

It’s also fair to be skeptical about the Nets’ ceiling given how Irving and Durant fared in the first round of the 2022 Playoffs against the Celtics.

The Nets remained among the title favorites last season even amid the chaos of Irving being away from the team, Durant’s injuries, and the James Harden fiasco. There’s an argument that their ceiling is even higher with Simmons given his theoretical fit next to Irving and Durant.

Brooklyn Nets star Kyrie Irving is opting into his $37 million player option for the 2022-23 season, @TheAthletic @Stadium has learned. Irving is bypassing on multiple opt-in and trade scenarios to fulfill his four-year commitment to the Nets and Kevin Durant.

It’s a very slim chance they get anywhere near that ceiling. There is no guarantee that Irving is on this team come opening night. Who knows what to expect from Simmons. Durant’s health is an underrated issue here, too.

Combine all those factors, and it’s remarkable that the Nets are +650 while the Bucks are +700. Milwaukee just took the Celtics to seven games in the second round without Khris Middleton and won the title the year before. The Nets are not good value at this price even if Irving signs a long-term deal to provide relative stability.