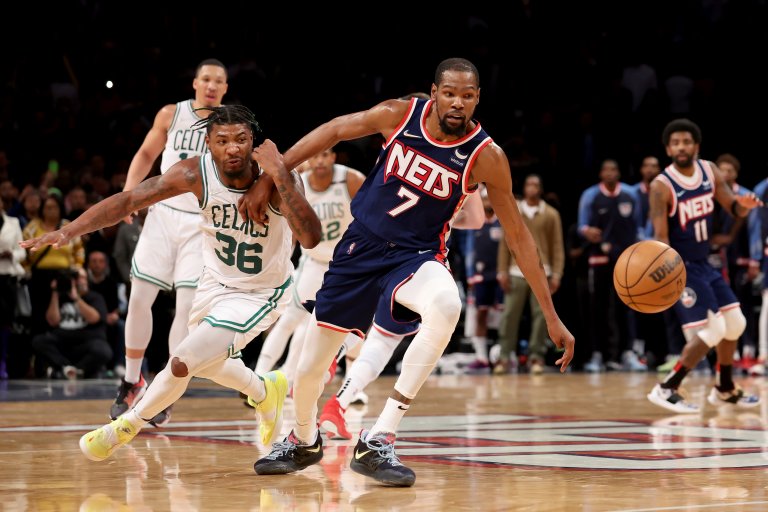 In a shocking turn of events, Brooklyn Nets star Kevin Durant has requested a trade
As a result, their 2023 NBA title odds have drastically changed from +700 to +1600
Does Brooklyn have any chance in the East if KD leaves? Read on for the odds and analysis

Ahead of NBA Free Agency opening up on Thursday night, Kevin Durant dropped a bombshell on the Brooklyn Nets by requesting a trade. It was a drastic turn of events considering Kyrie Irving just opted into his player option for the 2022-23 season, but it’s clear KD doesn’t believe this team is capable of winning a ring.

FanDuel quickly updated the Nets’ 2023 NBA Championship Odds and we’ve seen them absolutely plummet from +700 to +1600.

Odds as of June 30th at FanDuel Sportsbook.

Aside from the movement in Brooklyn’s odds, you can see the Suns improved from +1000 to +600 after reports that Phoenix is one of KD’s primary destinations.

What’s Next for Brooklyn?

This is a literal nightmare for the Nets. After forming a Big 3 of Durant, Kyrie, and James Harden, they never reached their title aspirations. Between injuries and off-court drama, it just didn’t work out. KD will have no shortage of suitors and Woj already reported that more than half the league has called Brooklyn to inquire about a trade for the 12-time All-Star, with countless teams willing to include tons of assets in order to acquire Durant.

Kevin Durant has requested a trade out of Brooklyn, sources tell @TheAthletic @Stadium.

The Nets should be able to get some intriguing pieces in return. However, with KD on his way out, it also means Kyrie has most certainly played his last game at the Barclays Center. Despite opting in, the PG isn’t about to stay in Brooklyn after he was already linked to a possible sign-and-trade before Monday’s decision. The franchise isn’t willing to reward him with a long-term extension and now that his running mate will no longer be around, it’s a foregone conclusion Irving is going to be in another jersey this summer.

Brian Windhorst on what led to Brooklyn’s disaster ?

Where Could KD End up?

Duran has a number of teams on his desired landing spots, with the Suns and Heat being the main two as of right now. Phoenix is an intriguing option because he can team up with Devin Booker and Chris Paul, two players with championship experience from their title run in 2021. Also, the Nets could get a lot in that blockbuster like Deandre Ayton, Mikal Bridges, and multiple picks. The Suns would surely be down to go all-in for KD.

Phoenix and Miami are among two of the teams that Kevin Durant has on his wish list, sources tell ESPN, but the Nets plan to move Durant where they can get the best possible deal. With four years on his contract, there’s no shortage of teams willing to unload assets for Durant.

Teaming up with Jimmy Butler in Miami is also a tantalizing thought. The Heat also has lots of players to offer, including Tyler Herro, Duncan Robinson, Bam Adebayo, and even Gabe Vincent. But, Pat Riley will be wary about how much he gives up as well. Nevertheless, it’s not every day a player of Durant’s caliber becomes available.

Nets Aren’t Worth a Bet Anymore

With Kyrie and KD expected to lead the Nets again as early as Thursday morning, it could’ve been worth a bet at +700 for them, but  I would’ve still leaned towards an Eastern Conference pick. As of now, looking at this team as a championship contender is out of the question.

It’s essentially going to be Ben Simmons and a bunch of new players on this roster in the very near future. The Brooklyn front office will make a point of acquiring solid pieces, but they won’t be considered a threat in the East anymore once their superstar duo is gone to greener pastures.