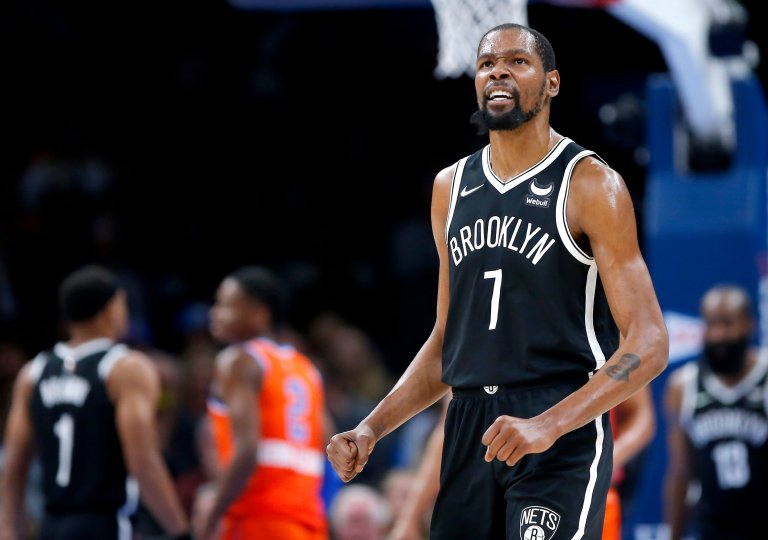 Kevin Durant asked the Brooklyn Nets for a trade earlier this month
However, the ask for the 12-time All-Star is so steep that interest in Durant is tailing off, making the likelihood of him staying in Brooklyn the new betting favorite
Where will KD end up? Find the Kevin Durant next team odds and analysis below

In the 19 days that have passed since 12-time NBA All-Star Kevin Durant asked the Brooklyn Nets for a trade it’s been all talk and no action.

How about the Brooklyn Nets?

It would appear that Brooklyn’s asking price for Durant is sending teams packing. Oddsmakers are seeing it that way as well in NBA betting. Today, the NBA odds are -120 favoring Durant to be staying put in Brooklyn in a Kevin Durant next team prop wager.

When odds were first released on this prop, it was the Suns were the -200 chalk. Brooklyn was the second betting choice at +700.

The Nets are aiming high in their demands for Durant. Too high for the tastes of potential deal partners, it would appear.

Durant does bring a lot to the floor, after all. He’s an NBA champion, former NBA Finals MVP,  regular season NBA MVP and scoring leader. Among active players, only James Harden (101) and LeBron James (69) show more games with 40 or more points than Durant’s total of 62. Last season, Durant’s 56.5% performance from 3-point range was third-best among qualifiers.

The Brooklyn Nets have their eyes on Scottie Barnes, via @wojespn. pic.twitter.com/MitcY5C9zO

At the same time, he’s 33 years old. And the Nets are seeking the world for Durant’s services. They want NBA Rookie of the Year Scottie Barnes in any package from the Raptors. The Suns fell out of the Durant sweepstakes when the club was able to keep Deandre Ayton and get his name on a new contract.

As these deals were fizzling, the thought that Durant could be staying in Brooklyn was suddenly looking like a much more realistic possibility.

Could Miami Talks Heat Up?

The Miami Heat are one team that still seems to be in there pitching for Durant. It’s known that Miami would be a destination that Durant is in favor of as his new home. His arrival would boost the Heat in the NBA championship odds.

However, again the stumbling block is the ask of the Nets. They can’t get Bam Adebayo included in a Durant deal. Already with Ben Simmons, the Nets can’t have two players on rookie max contracts. It’s an NBA rule.

“An extension for Herro effectively would remove him from any trade discussions regarding Brooklyn Nets forward Kevin Durant or Utah Jazz guard Donovan Mitchell.”

The Heat are reportedly offering a package built around Tyler Herro and Duncan Robinson. That’s just not of interest to Brooklyn’s brass.

Wizards Conjuring Up An Offer For Durant?

A sleeper offering sublime value in this whole scenario are the Washington Wizards. They’re currently listing at odds of +7000 to be Durant’s next team.

“Several sources even have told Hoops Wire to keep an eye on the Wizards, who could make a major push,” Sam Amico reported. “Durant is a DC product, too. He may not be upset about playing at home alongside Bradley Beal.” pic.twitter.com/IlhlVXWjHr

Right away there’s problems with this scenario. Washington must shed salary to make a Durant deal work. That likely means Brooklyn would need to want to take on Kristaps Porzingis and his hefty contract.

Give the Wizards an A for effort but this move just doesn’t make sense for the Nets.

Kevin Durant Next Team Odds – Don’t Count Out The Raptors

If Toronto can manage to convince Brooklyn to take Barnes out of the equation, there’s a deal to be made here. The Raptors can build a package around OG Anunoby, Gary Trent Jr and draft picks.

Took another stab at a Kevin Durant trade, this time to Toronto.

Raptors get Durant and a bunch of role players.

Nets get Mitchell, Siakam and OG.

Jazz get some young guys and a bunch of picks.

How far off am I here? I feel like Utah wants a bit more? pic.twitter.com/FpNugkaRdO

If Durant continues to demand a move, eventually, the Nets may be left with no choice. Of all the fits, a Toronto move still looks to be the best chance to get a Durant deal done.