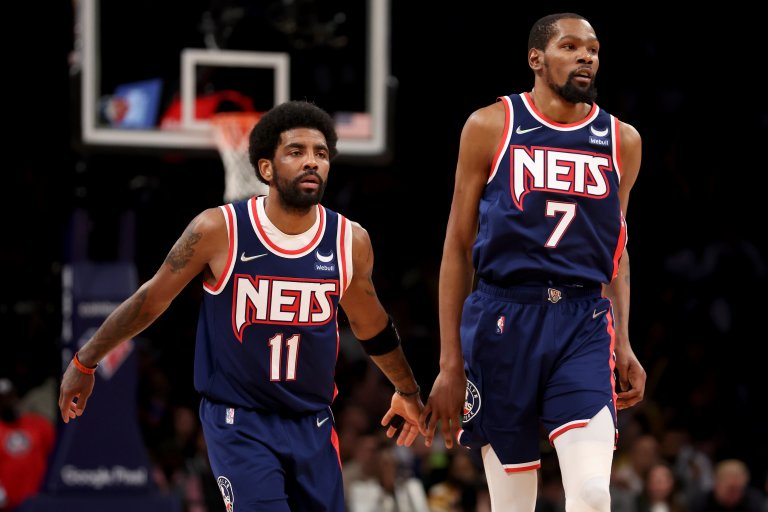 Apr 25, 2022; Brooklyn, New York, USA; Brooklyn Nets guard Kyrie Irving (11) and forward Kevin Durant (7) drop back on defense during the second quarter of game four of the first round of the 2022 NBA playoffs against the Boston Celtics at Barclays Center. Mandatory Credit: Brad Penner-USA TODAY Sports

The Brooklyn Nets’ 2023 NBA championship odds have shortened as Kevin Durant and Kyrie Irving trade rumors have fizzled
There has been speculation that the Nets could look to run it back with their two stars
How likely is it that Brooklyn brings back Durant and/or Irving?

It’s been a turbulent few weeks for NBA Championship Odds. The Brooklyn Nets have been at the center of the changes, initially with Kyrie Irving set to leave, then opting in. What followed was a shock trade request from Kevin Durant, which drastically lengthened their price to win the title in 2023.

Brooklyn’s odds have shortened once again at Caesars Sportsbook amid reporting that there has been a lack of progress in trade talks. Once out at +5000, Brooklyn is in to +2000 as of Wednesday morning. That’s a shorter price than the Grizzlies, Mavericks and Nuggets.

Odds as of Jul 06 at Caesars Sportsbook

Shams Charania reported on Tuesday that the Nets are preparing for an eventuality where Durant and Irving return for the 2022-23 season. Crucially, it was also noticed that Durant’s desire for a trade is unlikely to subside. Brooklyn is prepared for this to take months rather than days given the substantial asking price.

The Suns, Heat, Raptors and Warriors are the teams most interested in trading for Nets’ superstar Kevin Durant, per @ShamsCharania.

Shams says this process could take weeks, if not months. (via @TheRally) pic.twitter.com/zxxCALtHI6

The Nets are taking a similar stance to how Daryl Morey approached Ben Simmons’ trade request. Ironically, Morey eventually got the deal he wanted from the Nets. Recent reporting might make it sound like the Nets will run it back, but this feels like posturing as part of trade negotiations. Brooklyn has to show it is willing to hold onto their stars to drive up the bidding from interested teams.

An Irving trade is more straight-forward than a Durant deal. There are very few suitors for Irving, and the return will be minimal in comparison. The Nets are more motivated to trade the former Celtic quickly too, due to his expiring contract.

REPORT: The Nets are making free agency moves “as if Kevin Durant and Kyrie Irving are returning next season”.

For Durant, Brooklyn is determined to hold its ground and make sure it gets the package of overwhelming draft capital and star young talent it wants. There are also a lot of moving parts in a potential Durant trade, particularly with the Suns or Heat given the complications of moving Deandre Ayton or Bam Adebayo in such a deal.

If Brooklyn does manage to convince Durant and Irving to give it one more go, they will instantly be considered a genuine title contender and their NBA Betting price will shorten dramatically. Simmons is supposedly healthy. Joe Harris should be back. Royce O’Neale and TJ Warren are good fits alongside the star core.

“The Lakers have yet, I’m told, to be aggressive in trying to put a deal together to get [Kyrie] from Brooklyn. That may come, that may evolve with time. But so far right now, there’s no traction really on deals with either Irving or Durant.”

There is a possibility, albeit very slim, that Durant is favorite in NBA MVP odds at Christmas and the Nets are a top two team in the Eastern Conference. The prospect of an available Simmons plus better pieces is as exciting as it is implausible.

Even the suggestion that Durant and Irving could stay is going to tempt some bettors to back Brooklyn at such a long price. The likelihood is that this is no more than a stage in the negotiations, just as Morey said he would be willing to keep Simmons past the trade deadline last season. There is no reason for the Nets to rush into a Durant trade, especially with all of their draft assets owed to Houston. It is imperative that they get this right.

The Nets *could* just run it back.

Stranger things have happened in the NBA than Durant and Irving suiting up for Brooklyn this autumn. Even if that does happen, though, there’s no way to be confident in the Nets both staying healthy and avoiding drama for a whole season to mount an improbable title charge.