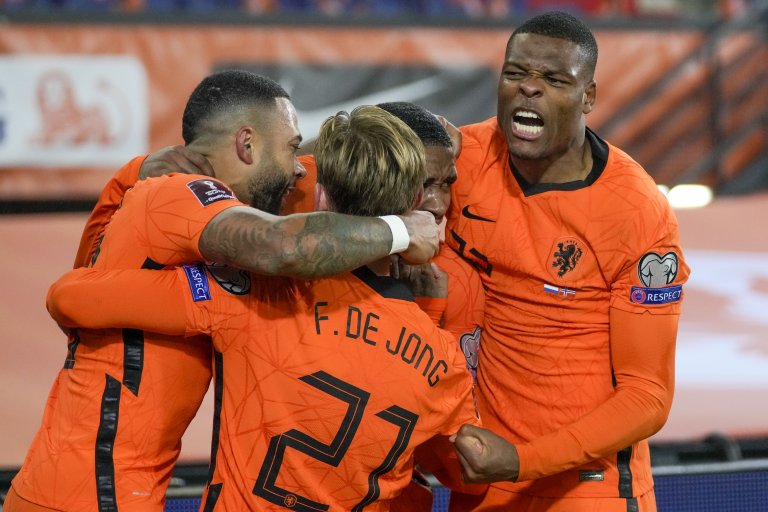 The Netherlands host Wales on Tuesday in Nations League action
The Dutch already beat the Welsh 2-1 on Matchday 2
Find the Netherlands vs Wales odds, preview, and prediction below

Wales will be searching for their first victory in the 2022-23 UEFA Nations League campaign on Tuesday when they visit Group A4 leaders in the Netherlands in Rotterdam on Matchday 4. The kick-off is scheduled for 2:45 PM ET. Read on for the Netherlands vs Wales odds and best bets.

The Dutch are coming off a gritty 2-2 draw with Poland on Saturday thanks to a Denzel Dumfries equalizer. The Welsh meanwhile also settled for a lone point on Matchday 3 against Belgium.

Odds as of June 13th at Barstool Sportsbook. Also, be sure to take advantage of these BetRivers promotions for this match

Netherlands is a massive favorite here with -315 odds to win this match, while Wales is at +900. The hosts also sit at +1400 in World Cup odds to win the tournament later this year.

Given Holland’s free-scoring ways so far, the over 2.5 goals at -134 odds look attractive. Plus, the last two meetings between these sides hit the over.

The Dutch have looked very good in the Nations League, sitting at the top of this group with a 2-1-0 record. They’ve bagged eight goals in just three outings while conceding four times and even throttled Belgium 4-1 on Matchday 1. But, Saturday’s clash with Poland proved to be far more difficult than previously thought.

The hosts went down two goals after Matty Cash and Piotr Zielinski found the back of the net for the Poles but just minutes after their second goal, Netherlands stormed back with authority. Veteran midfielder Davy Klaassen tapped home a picture-perfect cross from Daley Blind and just moments later, Denzel Dumfries smashed in an equalizer. The Dutch certainly had their fair share of chances, but they couldn’t find a winner, with Memphis Depay even missing a late penalty.

Despite the lack of success in the Nations League, Wales will be very pleased with their result against a Belgium outfit that is ranked third in the world. Although just two shots found the target, the Welsh had 14 attempts in total to just eight for the Red Devils and honestly looked like the more threatening side. It wasn’t until the 86th minute that Rob Page’s men found their breakthrough though as Brennan Johnson scored his first-ever international goal courtesy of a ridiculous assist from Aaron Ramsey.

Such a promising result versus a top-tier opposition should give the Welsh no shortage of confidence for Tuesday’s encounter. We also can’t forget they’re still riding a high after qualifying for the 2022 World Cup, their first appearance on international football’s biggest stage in 64 years. However, it’s important to note Wales has never beaten Holland, losing all nine meetings.

It’s impossible to look past the history between the two sides. The Dutch are very strong and I frankly don’t see them losing here. With the moneyline offering practically no value, I’m liking the Netherlands to win and both teams to score. Wales has found the back of the net in every Nations League fixture thus far and should give the hosts a run for their money. That means the over is also worth a bet.