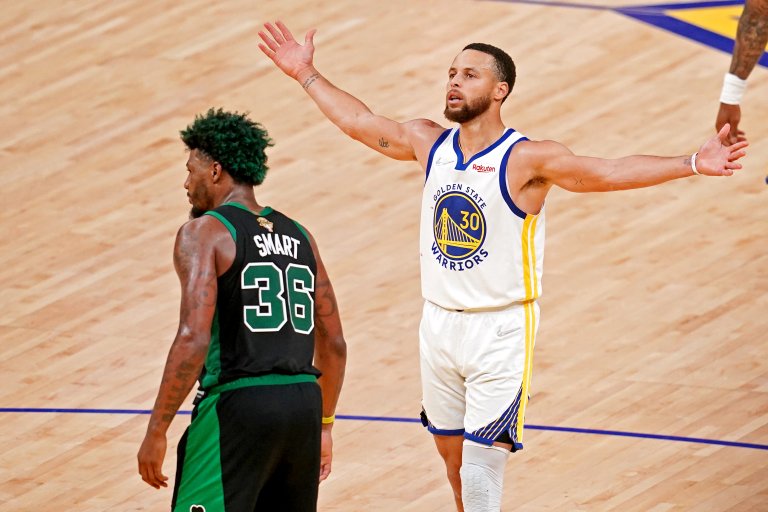 Golden State Warriors guard Steph Curry is the -385 odds-on favorite to win the NBA Finals MVP Award
Jayson Tatum, at +375, is showing the shortest odds in this betting market of any Boston Celtics player
All of the NBA Finals MVP odds, picks, and best bets are analyzed in the story below

In the lead up to the 2022 NBA Finals, much was made about the fact that while Golden State Warriors gaurd Steph Curry had won just about every honor in the game, one thing missing from his collection of hardware was an NBA Finals MVP award.

And he took that personally – or so it would seem.

Golden State is going into Thursday’s Game 6 at Boston with a 3-2 lead in the best-of-seven NBA Finals series. With a victory, the Warriors can wrap up the set and win their fourth league title since 2015.

If they do so, – the Warriors are -360 favorites in the NBA Championship odds – Curry will be a big reason why this is so. He’s leading all scorers in the NBA finals, averaging 30.6 points per game. No wonder then that oddsmakers are setting him as the overwhelming -385 chalk in the NBA Finals MVP odds.

In Golden State’s three title-winning seasons during Curry’s career, Kevin Durant (twice) and Andre Iguodala were NBA Finals MVP. Naysayers were wanting to suggest that this was displaying Curry’s inability to come through on the NBA’s biggest stage.

It was all nonsense but nonetheless, Curry has silenced any doubters with his performance in this series. Should Golden State go on to win the set, Game 4 will be viewed as the seminal moment of the 2022 NBA Finals.

Leaving Game 3 with an injury, Curry’s status going forward was uncertain. Boston led 2-1 and Game 4 would be played on the Celtics home court.

Instead of being hobbled, Curry was breaking the heart of Boston fans. He poured in 43 points in leading Golden State to a Game 4 verdict. It’s been all Warriors since that turning point.

Can Boston Come Back?

The Celtics have only ever lost the NBA Finals in a game on their home court once. That should given them hope of extending this series to the seven-game limit.

Jayson Tatum is the 10th player in NBA history to average 20/7/7 in the Finals.

The youngest to ever do it ☘️ pic.twitter.com/K71qAVg5MJ

Should Boston win the last two games and take the series, forward Jayson Tatum would then become the favorite to be named NBA Finals MVP. He’s leading the Celtics in ppg (23.2) and rebounds per game (7.6). He’s scored at least 23 points in each of the past four games.

No Canadian player has ever been named NBA Finals MVP. Thornhill’s Andrew Wiggins of the Warriors raised some eyebrows in Game 5. While Curry was limited to 16 points, Wiggins went off for 26 points and 13 rebounds.

Wait a second: Is it possible Andrew Wiggins is going to pull a 2015 Iggy and win Finals MVP out from under Steph?

There’s only one way Curry doesn’t win the NBA Finals MVP. That would be the Celtics rallying to win the series.

At 34 years old, he would be the oldest player to average 30 points in a single Finals since Michael Jordan in 1998.

A player from the losing team has been named NBA Finals MVP once – Jerry West of the Lakers in 1969.

If Golden State wins, Curry wins. It’s as simple as that.