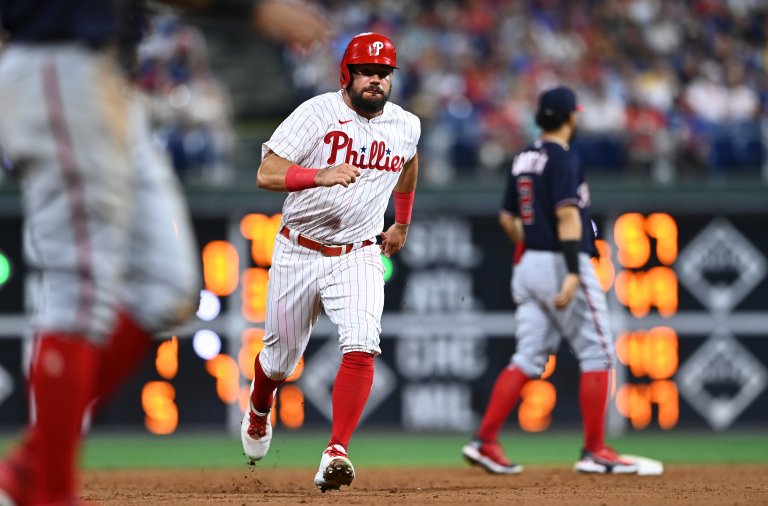 It’s one thing to beat up on a team, it’s another to treat a club like the Phillies have treated the Nationals recently. Entering Wednesday, Philadelphia had taken 13 of 14 overall from Washington dating back to last season, and are fresh off blowing them out 11-0 on Tuesday.

Oddsmakers aren’t expecting the Philly dominance to end anytime soon, as they made them a sizeable favorite in Thursday’s afternoon tilt.

The Phillies opened as -150 moneyline favorites, in a contest that features a total of 9.5. First pitch is scheduled for 4:05pm ET at Citizens Bank Park in Philadelphia, PA, with rain and 82 degree game-time temperatures in the forecast.

Philadelphia remains a +3500 longshot in the World Series odds, despite a 22-9 record since June 1st. They’ll give the ball to Bailey Falter on Thursday, who’s underwhelmed in his first full season.

The Phillies have won four of his five starts, but he’s allowed 11 runs and four homers total over his past three outings. One of those performances came on June 17th against the Nats, when he surrendered five hits, three runs and two dingers over 5 innings.

Fortunately for Falter and Philly backers, the offense bailed him out in an 8-7 victory. Few offenses have been as potent as Philadelphia’s recently, something we’ll touch on later.

Washington meanwhile, who entered play on Wednesday losers of six straight, had yet to name a starter as of Wednesday night.

Over the past seven days Philadelphia has a slash line of .283/.349/.876 despite Bryce Harper being on the shelf. Kyle Schwarber has been the catalyst, as he was earlier in this series when he smacked his NL leading 24th and 25th home runs on Tuesday, and his 26th on Wednesday.

He remains a longshot contender in the NL MVP odds, but that’s going to change if he keeps this up. He hit 12 home runs alone in June, batting .272 with a 1.065 OPS.

Philly ranks top-eight in MLB in slugging and OPS for the season, and have scored seven or more times in eight of their last 11 versus Washington entering Wednesday’s contest.

Washington’s struggles have coincided with both poor pitching and poor hitting, which has been a consistent theme all season. The Nats have been outscored 40-19 during their six-game skid, and are batting .226, with a measly .312 OBP over the past week.

Only the Pirates average fewer runs per game in the NL, while Washington ranks at the bottom in home runs. As bad as their lineup has performed, their pitching has arguably been worse.

WAS vs PHI Last 10 Meetings

The Nats have allowed the most hits in baseball and the second most runs per game. No team has surrendered more home runs, while only Kansas City has issued more free passes.

As for the head-to-head recent history, Philly hasn’t been just winning the matchups they’ve been embarrassing Washington. The Phillies have a +44 run differential over the Nationals in their past 14 meetings, winning by multiple runs eight times.

Philadelphia, even without Harper, is an ascending team playing incredible baseball over the past month. Washington has the second fewest wins in baseball and the league’s worst run differential.

Bet on Philly to stay hot, and for the Nats misery to continue.