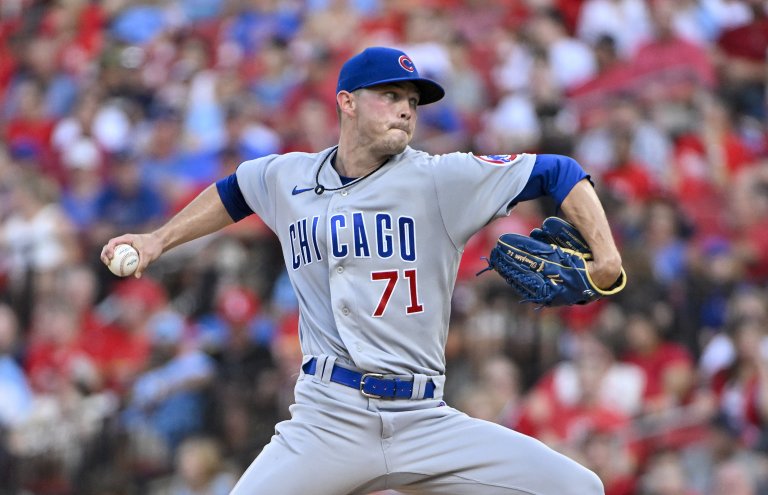 The Cubs are -185 home favorites over the Nationals on Monday night
Anibal Sanchez (0-4, 7.65) will pitch for Washington against Keegan Thompson (8-5, 3.48)
A look at the Nationals vs Cubs odds and matchup can be found below with a prediction

The Cubs (43-64, 22-33 home) lost for the sixth time in their last eight games Sunday when they were blanked 3-0 by the visiting Miami Marlins.

The Nationals (36-74, 19-34 road) have the worst record in the major leagues and were hammered 13-1 by the Phillies on Sunday in Philadelphia. Washington has lost five straight games as well as six of seven and eight of 11.

Odds as of August 7th at Caesars Sportsbook.

It could be a windy and rainy night at Wrigley Field with the weather forecast calling for a 50% chance of showers or thunderstorms and wind from the north at 10-15 mph with gusts up to 25 mph. The temperature at scheduled first pitch is expected to be 72 degrees with a low of 67.

Anibal Sanchez (0-4, 7.65) is scheduled to start for the Nationals against Keegan Thompson (8-5, 3.48). Sanchez will be pitching on four days of rest and Thompson on five.

Sanchez has lost all four starts after spending the first three months of the season on the injured list with a cervical nerve impingement. He was tagged for five runs and five hits in 4.1 innings by the New York Mets on Wednesday in Washington while walking three and striking out two.

Anibal Sanchez threw a 60.5 MPH butterfly change tonight. When you’re 38 and pitching in the show for the first time in a couple years, you’ve got to empty out the bag of tricks! pic.twitter.com/B26oVjmDX7

This will be Sanchez’s second road start of the season. He gave up three runs in five innings to the Arizona Diamondbacks on July 23 in Phoenix. Sanchez has a 7.47 ERA in three starts at night.

Thompson has struggled lately, going 1-3 with a 4.22 ERA in his last six starts.

Thompson got hit hard by the Cardinals on Tuesday in St. Louis. He was roughed up for five runs and 10 hits in 4.2 innings with two walks and one strikeout.

In his lone appearance against the Nationals, Thompson got a win last season by pitching 1.1 innings of scoreless relief.

He has never forgotten where he comes from.

Nationals hitters have just seven plate appearances combined versus Thompson. The Cubs’ Yan Gomes is 8 for 22 (.364) with two doubles, one triple and two home runs off Sanchez.

Cesar Hernandez was a bright spot for the Nationals on Sunday as he had three hits and his team’s only RBI despite Washington losing by 12 runs to the Phillies. Luke Voit added two hits.

The Nationals gave up 14 home runs while being swept in the four-game series.

The Cubs also had a rough time Sunday, being shut out on two singles by the Marlins.

Cubs rookie center fielder Christopher Morel, who has +3000 National League Rookie of the Year odds, missed the game with right hamstring tightness. He is questionable for Monday.

Despite it being this late in the season, the teams are meeting for the first time in 2022.

Neither starter is pitching well in the moment. However, the lean goes to Thompson pitching at home, where he has been successful this season.