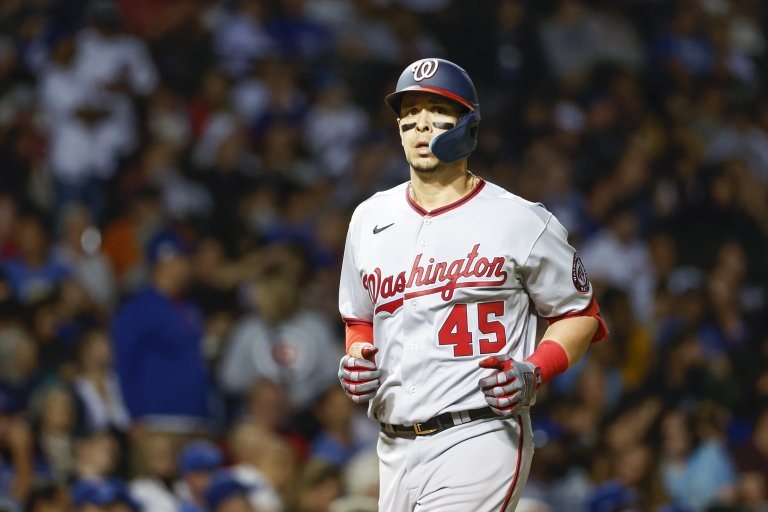 The Cubs are -175 home favorites over the Nationals on Wednesday
Josiah Gray (7-8, 4.92) will pitch for Washington against lefty Justin Steele (4-7, 3.67)
A look at the Nationals vs Cubs odds and matchup can be found below with a prediction

The worst-in-baseball Washington Nationals will look to win a series when they visit the Chicago Cubs at 2:20 p.m. ET Wednesday in the finale of a three-game at Wrigley Field.

Odds as of August 9th at Barstool Sportsbook.

It should be a beautiful day in Wrigleyville as the weather forecast calls for sunny, a high temperature of 80 degrees and 5-10 mph wind from the northeast.

Gray has struggled recently with a 1-4 record and 7.63 ERA in his last six starts.

He was tagged for six runs and five hits in four innings in a loss to the Phillies last Friday in Philadelphia. Gray struck out four and walked three.

He does his good moments, though.

Josiah Gray struck out the side in the [email protected]_ // #NATITUDE pic.twitter.com/IKCcZJEDYJ

This will be Gray’s first appearance against the Cubs.

Steele has a 1-2 mark over his last five starts despite a stellar 1.73 ERA.

He was outstanding last Friday against the Miami Marlins but pitched just 4.2 innings of shutout ball in a no-decision because of a high pitch count. He allowed four hits, walked one and struck out 10.

Steele has made two career relief appearances versus the Nationals, going 1-0 and not allowing a run in two innings.

Luke Voit is the only Nationals hitter to face Steele and is 0 for 3. Gray has never matched up with any of the Cubs’ batters.

A MENESES TO SOCIETY pic.twitter.com/jlPAhBh6ZW

The Nationals claimed left-handed reliever Jake McGee of waivers from the Milwaukee Brewers prior to the game.

The Cubs’ Seiya Suzuki had a home run among his three hits and his National League Rookie of the Year odds are +1800. Zach McKinstry also had three hits.

Ian Happ and Nico Hoerner each had two of Chicago’s 15 hits, but it wasn’t enough.

Designated hitter Franmil Reyes made his Cubs’ debut a day after being claimed off waivers from the Cleveland Guardians and went 1 for 4.

Welcome to the Franmil Confines!? pic.twitter.com/ESQC9L4UjL

This is the first series between the teams in 2022 after the Cubs went 4-3 against the Nationals last season.

Gray has pitched well on the road and in the day but it’s tough to buck Steele with the way he has been pitching over his last five starts. The lefty is due to catch a break this time and get a win.