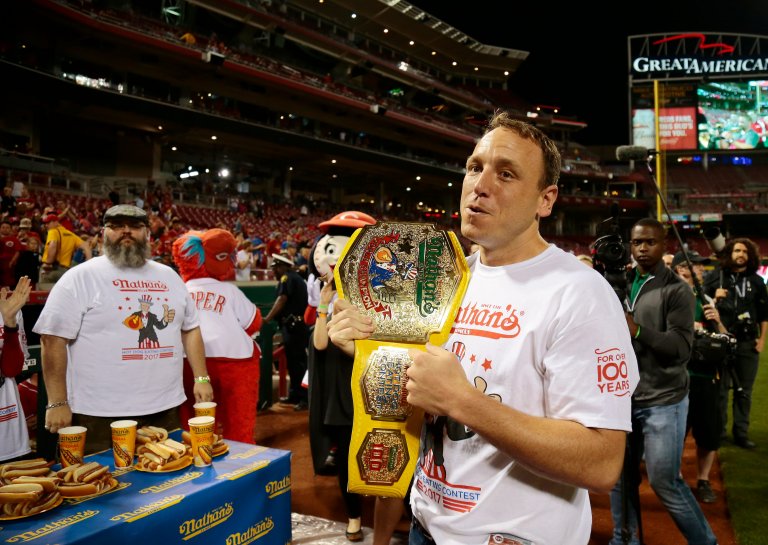 When it comes to the Nathan’s hot dog eating contest, Joey Chestnut is the Wayne Gretzky of weiner gobbling. He wins the title every year and the records he breaks along the way are his own.

The world #1-ranked competitive eater will be seeking his 15th overall title and seventh in a row when the elite of the sport gather in New York for the annual July 4 Nathan’s hot dog eating contest. Chestnut owns this event, He’s won it 14 times in the past 15 years.

Oddsmakers are anticipating that Chestnut will be repeating the annual beating he puts on the field during this event. He’s been set as the overwhelming -3000 odds-on favorite to again consume the most hot dogs in 2022. Bettors can play the field at odds of +1200

Miki Sudo is the -1800 chalk to win the women’s title. The field is available for a betting line of +900 in this side of the competition.

Competition takes place on Monday, July 4 in front of the Nathan’s location on the Coney island boardwalk. The women’s event is slated for 10:45am ET, with the men’s competition getting underway at 12pm ET. ESPN3 is broadcasting the women’s contest. The men’s event will be carried by ESPNews. All of the hot dog consumption can also be streamed via ESPN.com or the ESPN app.

Winners are the competitors who down the most hot dogs and buns during the 10-minute time limit.

In the days leading up to the July 4 hot dog eating contest, Chestnut has been walking around town wearing a boot on his right foot and utilizing crutches. He has suffered a tendon injury.

Chestnut was quick to point out that he doesn’t eat with his foot. While that’s true, he does stand while powering down all of those weiners. Might the injured foot inhibit his ability to stand for the entire 10 minutes of the competition?

“I feel better than I look.” Reigning champ Joey Chestnut showed up on crutches, but says he’s ready to compete in the Nathan’s Fourth of July hot dog eating contest. pic.twitter.com/q3qyTQqFZz

The king of competitive eating is also grieving the loss of his mother. Could these combination of factors make Chestnut ripe for an upset, something that’s happened just once in the past 15 years? Matt Stonie beat him in 2015.

That seems unlikely. Chestnut won last year’s event by a 26 hot-dog margin. He’d need to hit a horrific slump to be toppled from the title. That being the case, betting Chestnut at -3000 simply isn’t worth it.

The women’s competition is offering a little bit more betting intrigue. Miki Sudo had won every event since 2014. However, she sat out last year because she was pregnant.

The new mom is coming back to regain her crown this year. Sudo doesn’t appear to have lost any bite from her game. She easily won egg roll and donut hole eating titles already this year, consuming close to double the second-place finisher in each event.

I know y’all wanna see what @joeyjaws is going to do this year. It will be a show for sure.

Michelle Lesco won last year in Sudo’s absence. Her winning total, though, was a paltry 30.75 hot dogs. Sudo consumed 48.5 weiners and buns in her 2020 triumph. Again, though, as is the case with Chestnut, betting Sudo at -1800 doesn’t present a reward worth the risk.

Total Plays Will Rule The Day

Chestnut, 38, frankly admits that his days of dominating the frankfurter-eating fraternity are nearing an end. That being said, he’s driven to try and break his world record for the third year in succession. He at 75 hot dogs in 2020 and 76 last year.

Both have to eat a hot dog and finish before they start running.

Chestnut has established as his objective to get to 80 hot dogs in 10 minutes. He’s someone who’s proven to possess the ability to back up his boasts. Play the over on the winning total of 74.5 hot dogs.

Sudo, on the other hand, isn’t downing dogs with similar authority. While the 48 total in 2020 was impressive, she’s averaging 38 hot dogs per year during her title runs. Sudo has gone under the set total of 44.5 hot dogs in six of her seven wins.